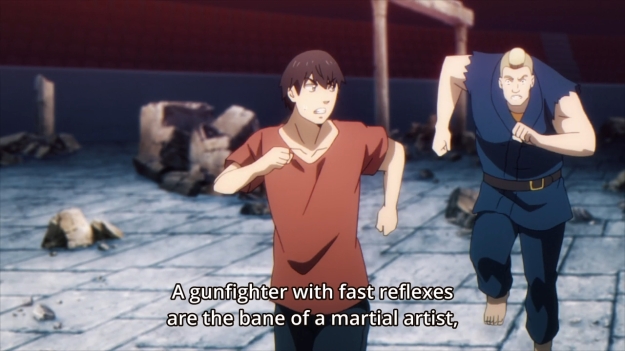 — We immediately jump into a duel between Kaname and Danjo. The latter is somehow such a skilled martial artist that he has no fear against our hero’s arsenal of guns and grenades. I would think maybe Kaname has bad aim, but Danjo has no problems praising him. Instead, we’re supposed to believe that a man can somehow train his body enough to go up against guns. Yup.

— Like every anime out there, this fight features commentary from the sidelines. What’s especially annoying is that nothing tends to happen while the side characters are talking. As a result, we get to watch Kaname continuously fire his gun without needing to reload.

— Eventually, it looks as though Danjo would land the finishing blow, but Kaname bluffs him out with a flash grenade. We finally see the former use his Sigil, which is about what I would expect from a martial artist.

— Anyways, this stunt impresses Danjo enough that he’s willing to form an alliance with Kaname. Their duel would continue, but unfortunately, the next haremette has waited long enough. The woman who had bet on Kaname in the last event is finally here to collect her “prize.”

— So what’s Xuelan all about? She comes from a long line of assassinations, apparently. She’s number one in the rankings, too. It’s too bad that Xuelan’s character is largely defined by her rivalry with Shuka.

— We suddenly cut to Ryuji and Rein telling Shuka that Kaname has been abducted. How? Well, you know how anime has a hard-on for a warrior’s so-called “killing intent?” Like if some badass walks in a room, you can just feel this energy radiating from them or whatever. Guess what? Xuelan can apparently weaponize it. Her killing intent is so strong, it can incapacitate most people. It’s not even her Sigil either! This is just some bullshit that you can develop. Like if you stare hard enough at someone, they’ll run away or some shit. Sounds cringey to me — kinda reminds me of that stupid Jokar meme — but you do you, anime.

— Well, Shuka’s not gonna let someone steal her man, so the chase is on. In fact, she’s already tracking his location. Creepy normally, but certainly handy for this specific situation! Gotta hand it to those yandere girls.

— We cut to Kaname and Xuelan, and the latter explains why she wants him so bad. She’s been watching him closely, and she can tell that he has a secret lust for war that even he doesn’t know about. So while his Sigil is nice, she’s not even interested in it. Rather, she wants him to make a mother outta her, so she can raise a buncha weirdo war-loving babies.

— This is when Shuka and company show up to try and rescue Kaname. He then proposes a challenge that Xuelan has no reason to accept, but she does so anyways: if she can escape from his clan without killing anyone, then he’ll totally sploosh inside her. Sigh.

— So Shuka attacks Xuelan directly, because the whole killing intent thing doesn’t work on her. Why? Because unlike others, Shuka actually wants to die. Ah, a true millennial.

— I’ll be honest: I didn’t hate watching these two girls going at it. The animation isn’t stellar, but it’s a whole lot better than what we saw earlier between Kaname and Danjo. More importantly, nobody is describing to me every little detail of the fight. Rein is useful, but she talks too much.

— Eventually, the power of friendship allows Kaname and his friends to completely shut down Xuelan’s car. She’s eager to fight on, but her butler reminds her of the challenge that she stupidly agreed to. As a result, Kaname wins.

— But the girl goes a step further and says that she’ll just straight up join his clan… er, to watch him some more or whatever. Why would she still need to verify anything about him? She was already gonna bang this guy, but now she needs to test him some more? Just kidnap him again. I mean, it took his entire clan to save him, and they barely managed. Also, this is with the stupid “don’t kill anyone” restriction. If Xuelan had gone all out, would Kaname’s friends have survived? But whatever. Man, we could’ve ended on a high note, but we got this instead.

— In the after credits scene, we get to see that Wang has been torturing Kaname’s classmate. Welp. I’m curious as to whether or not Kaname still has a family. Seems like they would be better targets than a friend, but oh well.

So um… that was something. First, Watson is still alive. My rant about Mary was for naught, huh? Oh well. In any case, he had hatched a plan to trick Moriarty, but Moriarty saw through it anyways…? So what was even the point? Second, Holmes and Watson confront Moriarty together, so we get more of the “my teacup is broken, and now I want to break yours” metaphor. In the end, however, our supervillain realizes that Holmes loves him just as much as Watson (awww), so he kills himself… despite begging Holmes to save him just moments ago. Man, talk about whiplash. Still, I think Holmes’ speech midway through the episode was pretty poignant. It wasn’t Watson who taught him how to embrace the world and understand people’s hearts. It was Moriarty all along. So I liked that part.

But whether or not Moriarty survives — even if you see a dead body, all bets are off in anime — I can’t help but look back at the entire story and kinda cringe at how we got here. I mean, our antagonist went from palling around with all those kids to becoming a supervillain. But maybe that’s fine too. After all, they say Ted Bundy was super charming and charismatic, and this was exactly how he lured in his victims. Plus, we are often fooled by the ones we love most. We think we know them inside and out, but it is this implicit bias that allows them to lie to us so easily. This explains how someone so utterly immoral like Moirarty can go unnoticed within his small and cozy group of detectives and friends. Still, this is how I thought it would go: losing his sister and being bullied in prison would slowly corrupt him, and as a result, Moriarty would become a nascent, baby villain still trying to walk for the first time. But instead, he came roaring out of prison with guns ablazin’.

This episode emphasizes something that I hadn’t thought of in a while: the authorities admit that he’s just a teenager. Being a broken teacup is one thing, but Moriarty is more than just a sociopath. He can somehow mentally manipulate people and then kill them with just a single phrase. He had all these elaborate scenarios all planned out, and he had his former friends on their knees just trying to stop him. Even when the SWAT team, a special unit trained specifically to stop the sort of extreme threat that our antagonist poses to the city, was closing in on him, they ended up being at Moriarty’s mercy instead. He saw through their every move (granted, it’s pretty dumb for them to take the elevator). What makes Moriarty a supervillain and not just a villain is that he’s somehow a criminal mastermind… as a teenager. And yet, he can’t figure out that Holmes is not as broken as he is? I dunno, I just think the whole Moriarty arc stretches credulity to its utmost limits. If our little buddy was the same age at Holmes, sure… but where did he find all the time to learn all this stuff? Sigh…

Anyways, the series is still not over. I wonder what else Kabukicho Sherlock has in store for us.

2 thoughts on “Casual Friday Week 9: When waifus collide and a bromance dies”