To dispel the myth of Steel Lady Nanase, Kotoko will have to come up with one excuse after another. If Steel Lady Nanase didn’t kill Detective Terada, then who did? There are enough oddities about the case to make us default to blaming a ghost. As such, it is up to Kotoko to make the supernatural seem quite natural. Thus she begins. The iconic steel beam? Just wood or styrofoam that has been painted to look like steel. Hell, let’s just go with styrofoam because wood can still be pretty heavy. The killer’s large breasts? Pads, of course! And boy, we men are easily tricked by pads and push-up bras, aren’t we? But perhaps the craziest thing about Kotoko’s story is the elaborateness of it all. She paints a serial killer who has every little detail down, from Terada’s exact height to the the location where he would stand. The killer would then booby trap an abandoned gas station alongside a road with no traffic at this exact time at night. Finally, the killer will even go so far as to fasten her booby trap using steel bolts. There’s even a remote control! This all takes quite a bit of planning and know-how, doesn’t it? Unbelievable, huh?

Well, yeah. Of course it’s unbelievable. Our heroine’s story certainly wouldn’t work on the police. You need only look at Saki to find one example. Not only that, one quick examination of the area — which, I might add — has certainly been done — would destroy Kotoko’s fanciful theory. But of course, the police are professionals, and it’s their job to be skeptical. They won’t chase some wild theory on a fan’s message board — a message board explicitly designed to enshrine Steel Lady Nanase. Luckily, Kotoko doesn’t have to convince the authorities. She just has to convince everyone else. She only needs to chip away at public perception, and we all know that the masses can be pretty damn gullible. From antivax parents to chemtrails to wacky flat earth conspiracy theories, people want to feel as though they are in the know. They want to feel as though they have this special knowledge that no one else has. And with Kuro’s special power, Kotoko can seal the deal. He just has to find a future in which the audience’s gullibility is maximized. 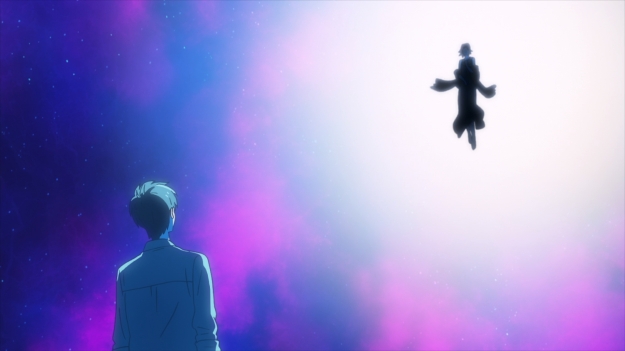 Naturally, Rikka will fight back. She has the same ability a her younger cousin, so she’ll poke holes into Kotoko’s story and find a future in which her readers are suitably skeptical. We’ll dance back and forth all night at this rate… unless one of them proves to be the better storyteller. I’ve said before that people just want to be entertained. Rikka has had a huge head start, and she’s used this advantage to build up an urban legend that has everyone hooked. As a result, Kotoko can’t destroy it one go… but she can certainly chip away at it. When you have an audience this big, you will obviously find that different people will gravitate towards different stories. Ghost stories are cool and all — and I love the paranormal — but they’re not universally liked by everyone. Not only do people want a good story, they might want something that they can relate to. Something that’s really juicy, but also relevant to our times. And I think we get a glimpse of that in Kotoko’s first account. Not only that, the source of inspiration appears to be none other than Saki herself.

Kotoko describes a coworker who is so troubled by Terada’s romantic pursuit of her that she would go to the trouble of murdering him. No woman would go that far, right? Well… I dunno. In this day and age, we are inundated with horrific stories of women facing unwanted advances, targeted harassment, and worse in the workplace. What if one of them fought back? And as unrealistic as Kotoko’s story might seem, some people might even welcome it, especially in today’s #MeToo climate. Revenge fantasies are not only common, they can serve a therapeutic purpose. Steel Lady Nanase is eye-catching because the idol has big breasts… and maybe she killed her father. Maybe. But now we have a story that might even be cathartic for certain people on the message board. Y’know, revenge against the patriarchy and all that. Of course, our heroine can’t and doesn’t win everyone over — especially with Rikka there to pose counterarguments — but she’s made a dent in Steel Lady’s Nanase’s armor. We can thus move onto the next story. 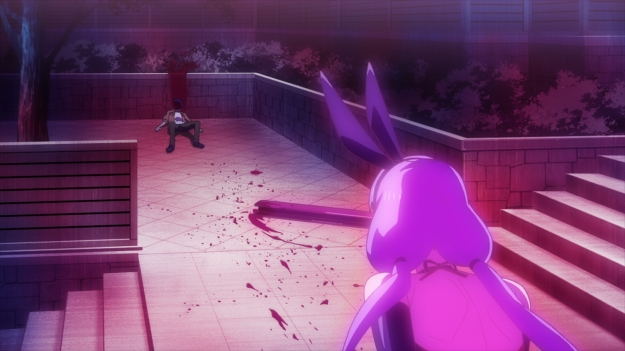 What about this post? Well, I guess you can call it my attempt to make the episode seem interesting. Honestly, it was kinda boring to watch.