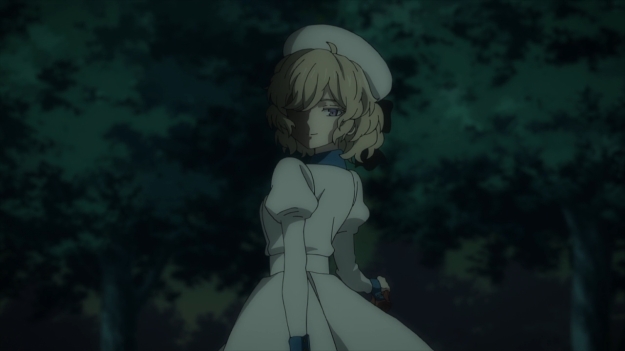 So how does Kotoko defeat Rikka once and for all with her fourth and final story? To put it simply, our heroine takes advantage of an unfortunate truism about people in general. It’s rather difficult to change someone’s mind when they’ve dug in their heels. Facts just don’t matter. If they did, all Kotoko would have to do was take the police report regarding Nanase’s death and present it to her audience. But she doesn’t, because she knows that this tactic wouldn’t work. Rather, she has to lead the masses to their own conclusion… even if that conclusion is completely full of lies. Kotoko has used the last three stories to gradually feed her audience with important details — details that Rikka have not bothered to refute. These details would then be used to come to yet another outlandish conclusion: Nanase isn’t dead after all! Not only that, Nanase is responsible for the creation of the fearsome ghost! If Rikka tries to refute this, then she’ll look suspicious. Kotoko has managed to drive her enemy into a corner.

But if Nanase isn’t dead, then who died? According to Kotoko, the former pop idol had found a doppelganger! Imagine that! The odds must be infinitesimally small. I’ve certainly never met a doppelganger. Nevertheless, Kotoko’s Nanase proceeded to kill her new friend and take on a new identity in order to escape her troubles! Finally, she created this forum to distract people from the possibility that she might still be alive! In some ways, this is sort of disrespectful of the actual Nanase, isn’t it? We know for a fact that she didn’t do all of this. We know for a fact that she was a distraught young woman who allowed herself to die when she could’ve potentially dodged those steel beams. Kotoko has not only framed the former idol to not just one murder but two. Isn’t this, well, kinda desecrating the dead? Sure, sure, it’s all for the greater good. We need to stop Rikka or else Steel Lady Nanase will claim even more lives. But is there a limit to what Kotoko will do in order to achieve her justice? What if in a future case lives are no longer on the line? Would Kotoko still go to any lengths to prove her point?

We know that our heroine doesn’t mind telling lies and half-truths. Hell, she doesn’t even mind implicating Saki of all people in one of her stories. And now, we see that she’s willing to destroy an innocent girl’s reputation just to win. Granted, the dead can’t complain, but that’s what soulless robots like I like to think. Society at large certainly doesn’t agree with that. Society at large tends to look down on people who disrespect the dead! Honestly, we just need to look back to the very beginning of the series. Kuro rejected Kotoko initially, but she didn’t take no for an answer. This is a girl who clearly doesn’t like to lose. More importantly, she isn’t exactly a beacon of lawful good. She has her own ideas of justice, and there’s a reason why Rikka dislikes her. Unfortunately, all we get are tantalizing hints at Kotoko’s nature. That’s the most frustrating thing about Kyokou Suiri. Our heroine will spend episodes upon episodes to explain the ins and outs of her strategy, but we won’t pay the same amount of attention to the characters.

Alright, fine, Kuro ate the flesh of two yokai, so he’s not 100% human anymore. This, however, doesn’t explain why he has become such an emotionless rock since breaking up with Saki. It also doesn’t explain why he has decided to spend years hanging out with Kotoko. Immortality doesn’t rob you of your feelings. Similarly, Rikka has spent most of her young life in a hospital, being poked and prodded by strangers. How did she feel about that? How did she feel about her short time living with Kotoko? And why has she decided that she no longer has to care about human lives? We. Just. Don’t. Know. She’s the primary antagonist, and we know practically nothing about her motivations. But of course, the author knows. The author must have an idea for where this story headed. He has simply decided to front-load the series with all these “clever” and “ingenious” solutions to the problems that Kotoko faces. Character development can wait! But can it? See, I’m not so sure about that.