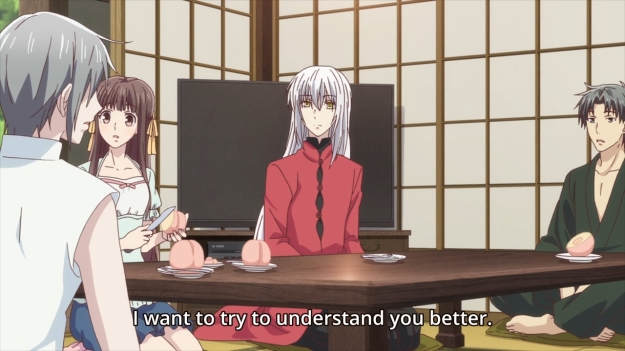 The episode kicks off with Yuki waking up from a bad dream. I guess his mom saw him as nothing more than a tool to further her own gain. That sucks, but like I’ve said before, Fruit Baskets renders me numb. A person can only have so many tears to shed. Maybe my emotional capacity to sympathize is lower than the average person, but all these bad parents have careened past the barrier of credulity. In any case, even if he can’t repair the relationship between him and his parents, he can still mend bridges with his brother. As a result, Yuki pays Ayame’s shop a visit, ’cause he would like to get to know his brother better. Not surprisingly, Ayame sews clothes to fulfill men’s fantasies. Nurse outfits, maid costumes, and even wedding dresses — he will help you attain whatever your heart desires! I suppose this sort of business fits Ayame. I think costumes are generally garish in their designs; they’re meant to be very obvious and in-your-face about what they represent. Ayame is the same way. His personality is very over-the-top and garish. He’s overcompensating much like one would when they wear a costume.

Ayame works with a seamstress by the name of Mine, and they seem to have an interesting relationship. First, I thought resting his head in her lap would trigger the curse. Second, considering what we know so far, there’s no way Akito would approve of these two, right? Well, maybe the head of the Sohma family doesn’t know anything about Mine, but it’s not like Ayame is even hiding her. At one point, Mine drags Tohru away, and she claims it’s because she likes to dress up cute girls. The real reason, however, is that she wants to give the brothers some space to have a heart-to-heart. I guess she understands Ayame quite well; he must have confided in her about his delicate relationship with Yuki. Hopefully, Ayame won’t have to erase her memories one day like a certain other Sohma had to do. 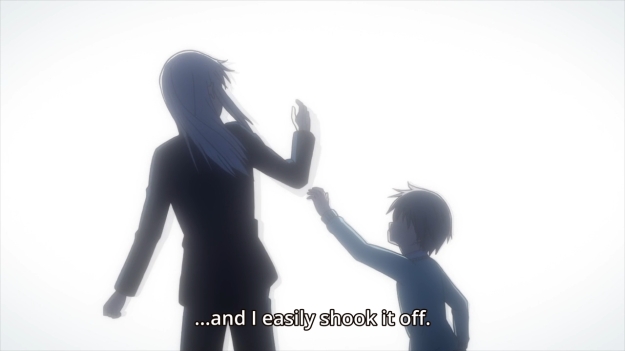 During the brothers’ heart-to-heart conversation, we finally learn why Ayame is trying so hard to get his brother’s attention: he completely ignored Yuki’s existence back when they were young. So even though his actions now annoy his brother, I suppose any attention is better than no attention. Suddenly, Ayame stops talking in his embellished manner. His real voice actually comes out when he starts talking about his craft. Like Yuki, he just wants to feel as though he’s necessary to someone. The rat can empathize since he also pours his heart into gardening. The brothers are more similar than they think; they just never had the opportunity to sit down and get to know each other. They won’t ever become best friends, but they’re really not so different on some key points. Still, there’s this sentiment that siblings just fight. As long as it never gets too serious, then it’s okay that Ayame and Yuki may never see eye-to-eye. I suppose I can agree with that. It’s the little spats that annoy me, though. For me, this episode might serve as a template for how Yuki and Kyo might one day repair their relationship. Co-existence is great! Tolerating each other’s presence is great! But why do you guys have to snipe at each other all the time? I suppose I can never understand that.

Once the brothers reach some sort of an understanding, Tohru emerges in her costume and it’s… ugh. It’s more than just a “cute” outfit. It’s very… matronly. But y’know, maybe that’s what Yuki wants. His mother never loved him, so maybe he’s looking for a replacement. At this point, I finally realize what bugs me whenever Yuki tries to flirt with Tohru: it doesn’t feel natural. Whenever he tries to put on the moves, it looks like he’s just imitating what he’s seen in a shoujo manga. Much like his brother, he’s embellishing and overcompensating for something that he has no instincts for. Does Yuki actually feel the urge to passionately kiss Tohru, brush his skin against hers, feel her hot breath on his chest, so on and so forth? I don’t think so. I do think he cares for her very deeply, but I don’t think his flirting attempts are actually born from any sort of carnal desire. As a result, when he tries to be romantic, it comes off as inauthentic. Like he sees an opportunity, so he just goes for it without any consideration to whether or not this is how he actually feels.

In any case, that about does it for this week’s episode.