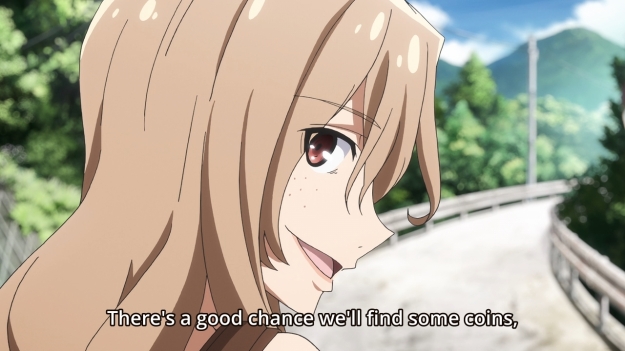 The prologue is finally over.

— Clair really needs to work on her aim. Maybe she should mix in a little CSGO in her daily activities.

— Elena can’t just knock the gun away, I suppose. She has to dramatically knock her sister up into the air. Maybe she wants to demonstrate that Clair is powerless against her? Eh, I dunno. It’s also possible that when she transforms, it takes a while before she can control herself or something.

— Eventually, she does turn back to normal. And eventually, she does reveal why she killed their parents. It’s kinda stupid, though. She tells us that they were bad people. Their father was a politician, and he did bad things. No, really. “Bad things” is all she says. She doesn’t exactly elaborate. On the other hand, all their mother did was cheat. Do I find cheaters reprehensible? Of course I do. But bad enough to kill them? Uh, no. And similarly, unless their father was involved in shit like child trafficking, did he really deserve to die as well?

— Elena ultimately claims that she killed their parents for Clair. She says that it’s her turn to protect her little sister now. That’s kinda stupid, though. Yo, I killed our parents and disappeared without a word. I’m sure you’ll be A-OK on your own without any answers! See? It’s just dumb. Plus, Clair would’ve killed herself had Shuichi not stepped in. Elena probably doesn’t know about her sister’s suicide attempt, but that’s what makes this even dumber. I wanna protect you, but I have no clue that you were in such a state of despair that you wanted to kill yourself!

— Finally, Elena gets an important phone call, so she has to leave. Before she goes, she asks if Clair still has the gold coin she had given her. I’m not sure why Clair decides to lie, but she does. As a result, Elena gives her another one. Right before departing, she tells Clair to “make good use of the coin.” See, this is another thing I don’t get. It’s plainly obvious why she gave Clair the coin: go and fix Shuichi. But then why be vague about it? What if your little sister doesn’t get your hint? Wouldn’t this screw Shuichi over just because you decided to be vague for no damn reason?

— Plus, when Elena learned that a girl was inside Shuichi, she got so mad that she tore off his head. But now, she walks away like she doesn’t even give a damn about him. How does that make sense?

— Sure enough, Clair doesn’t actually understand what Elena is trying to tell her, so she’s about to kill herself with the gun. All of a sudden, Shuichi’s head pipes up and tells her not to die. Up until this point. Clair had assumed that he was already dead. Maybe Elena thought the same thing? Maybe she gave her little sister another coin for a different reason? Eh.

— With renewed hope, Clair goes to the abandoned motel where you can find the Alien and his stupid vending machine. Apparently, he’s very much into manga. Hm, I thought he had a ship to fix.

— The Alien freaks out when he sees Shuichi’s current state, but I wonder if he’s feigning it or not. I don’t really think this guy can be trusted.

— In exchange for a coin, the Alien hands over a drink that should fix Shuichi up. Something about manipulating microbes. Alright then.

— Unfortunately for the girl, she has to wait for Shuichi’s head to reattach while wearing nothing but her underwear. Clair is a little too well-developed for a freshmen, don’t you think? As a result, Alien guy decides to get handsy, which promptly earns him a knee to the crotch. Shuichi then yells at Clair as if she had done something wrong. She was about to get groped, no? Are you not supposed to kick creeps in the balls?

— Well, since Clair won’t let the Alien play with her body, the latter goes ahead and eats a strand of her hair. In doing so, he is able to morph into a perfect replica of the girl. Well, except for the voice. Apparently, that won’t change.

— The Alien also tries to tempt Clair into trying one of his potions, but she flat out refuses. Personally, I don’t trust the Alien, so I would want nothing to do with his stupid magic elixirs. It’s clear that they have just as many drawbacks as they do benefits. But we have to consider something else…

— Clair explains that you have to accept yourself no matter what cards life has dealt you. Otherwise, you might as well kill yourself. It’s interesting that she would say that considering the fact that she did try to kill herself. So she knows she’s weak and she doesn’t really love herself. The only difference now is that she has Shuichi.

— Maybe Clair feels that she would no longer need Shuichi if she got stronger, and that’s exactly what she doesn’t want. She actually wants to depend on Shuichi. The girl has latched onto him, and she’s not going to let go without a fight. I suppose this says something about power: it can grant you independence, but independence can be lonely. It shouldn’t be surprising that a girl who lost her family overnight feels the need to not only hold onto someone, but be needed by them in return. It’s almost as if she feels safe and protected inside Shuichi’s “womb.”

— The Alien then proceed to give his little recruiting speech. Oh, his brethren turned themselves into coins for the arduous interstellar travel. Unfortunately, they crashed into Earth and the coins went flying everywhere! Since he can’t fix the ship and find his buddies at the same time, he needs our help! Yeah, sure. Aliens capable of spacefaring and genetic manipulation can’t find a bunch of goddamn coins on their own? This is exactly why I don’t trust this guy. I bet you he’s getting his rocks off watching a lesser species fight and kill each other over this contest.

— If you collect 100 coins, you’ll get a really special prize! Like what? An extra life? Well, the Alien will grant you even more power! You can even become a manga character with planet-destroying abilities if you wanted to!

— The kids tell the Alien that they’ll think about it, but they’ll definitely join the race for the coins. Clair will likely do so probably because she still has unsettled business with her sister. Plus, this sort of thing seems to invigorate the girl. Whereas Shuichi wants to be normal and live a normal life, Clair is the type who would love to indulge in the sort of excitement you might find in manga. At one point, he tells her not to use the gold coins, because things will get even more dangerous from here on out. Clair replies that she never had any intention on taking the Alien up on his offer, but not for the reason that Shuichi thinks. Rather, she doesn’t need to, because she has him. She’s still going to participate in the coin hunt, though.

— On the other hand, Shuichi needs to find his own reason to join the fight, which brings us to the next school day. Shuichi has changed both physically and mentally. When a jerk in the hallway tries to push him around, our protagonist becomes a classic Chad. Even the girls have taken notice.

— Mifune, however, serves as Shuichi’s one last meaningful connection to normalcy. For example, he no longer needs to wear glasses, but she tells him that “[they] weren’t so bad.” In other words, she preferred his old look but she’s too shy to outright admit it.

— In any case, Shuichi decides to get her opinion on something that he’s been struggling with. He asks her what she would do if someone out there had the power to end the world. The girl gives a standard enough answer: she would try to stop the bad guy in order to protect her loved ones. Welp, that just about does it for Shuichi. That’s his reason to hunt for the gold coins.

— Clair briefly listens in on this conversation, but she eventually leaves with a slight frown on her face. I wonder why. Jealousy, perhaps? Maybe she wishes he would have come to her instead? Who knows…

— Right before the credits roll, we see the kids ready themselves for a hike through the nearby woods and mountains. I’m sure it’ll be very chill and relaxing.

7 thoughts on “Gleipnir Ep. 4: The kids finally join the race”