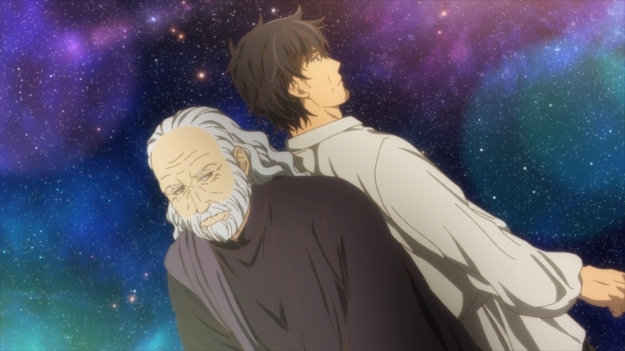 In this week’s episode, Arte learns to squeeze an old man for money… in a wholesome way.

— At the start of the episode, Arte’s stomach is growling because Leo likes to fast on Fridays. He’s not religious or anything. Rather, he just cares that much about his art. In order to afford the best tools for his work, he’ll dress shabbily and cut back on food. Well, that’s real dedication, but there’s no reason why Arte should do the same. In fact, I’d argue that she absolutely shouldn’t do the same. At her age, she’s still growing, so I like to think that she needs all the nutrients she can get.

— When the girl returns to the workshop, she finds Leo being accosted by Ubertino, a longtime client. When the old man finally leaves, she learns that Leo has been asked to produce an extravagant painting at the cheapest price possible. Oh, Ubertino is willing to pay a lot for a work of art, but not a penny over. Basically, the workshop won’t profit from this project.

— Arte offers to negotiate in Leo’s stead, because she sees this as an opportunity to hone her people skills. Yeah, that makes sense. But y’know, I feel like it’s also smart to learn how to walk away from difficult clients. Sometimes, dealing with them is more trouble than they’re worth, and “No” is always a complete sentence. There are, however, reasons for why Leo can’t say no to Ubertino. Ultimately, it boils down to the fact that he actually cares for the geezer. He just doesn’t have the personality to admit this sort of thing.

— In any case, Arte’s first attempt is a complete failure. In fact, she fails so hard that we don’t even get to see it. Nevertheless, she begs Leo for another chance. And this time, she’ll enlist the help of a prostitute. After all, who else would know more about how to please people?

— Still, this makes me wonder about Arte’s mom. Has she really completely given up on her daughter? Is she not even curious about how Arte’s doing? I guess not. Also, what do widowed noblewomen even do all day if they don’t work?

— I watched the latest movie adaptation of Emma, a Jane Austen’s novel. Now, the 1800s England is a far cry from Italy during the Renaissance, but some things should remain the same right? And as far as I could tell, all British noblewomen seemed to do was attend parties and stir up drama. Alright, I’ve digressed enough.

— When Arte pays Ubertino a second visit, she turns on the charm. She even convinces the old man that he should handsomely compensate for their special skills — special skills that he wouldn’t find at any other workshop due to the fact that Arte is a noble. I guess only nobles would bother to study lace patterns. Shrug. 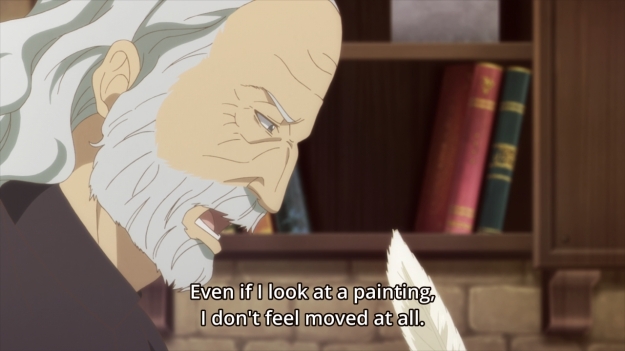 — So great, Ubertino is willing to pay a little more. He also lets Arte in on a little secret: he doesn’t really care for art at all. He just commissions all these paintings as a way to impress others. He tells the girl that she better get used to working with clients like him once she becomes independent. It’s just like anything else in life. Most people don’t buy fancy stuff because they care about the craft that goes into making them. They do it to impress others. They do it to keep with the Joneses. And hell, the art market nowadays is often used as a front for money laundering.

— Eventually, Arte also learn that Ubertino and Leo’s former master go way back. They proceed to joke about how it’s hard to imagine a guy like Leo having a childhood. So we get a few flashback scenes. Leo was picked on by the other kids, because he actually cared about art. And as a result, his master only bothered to critique his work. As the old adage goes, they only criticize you because they care. The opposite of love is often said to be indifference.

— As a result, we’ve come full circle. After a time skip, we see that Ubertino is happy with the painting. Unfortunately, he’s not happy that Leo continues to skimp on himself. We ultimately learn that when Leo’s former master was in his deathbed, he had asked Ubertino to look after Leo. This explains why the old man continues to be his patron. The idea is that he comes back over to over to yell at Leo because he cares.

— Still, something doesn’t really add up for me. If Ubertino is that worried about Leo, then why does he always try to pay the barest minimum? Is he trying to make Leo choose between art and food? ‘Cause that’s not going to happen. I suppose you could argue that no matter how much Ubertino coughs up, Leo is still going to skimp and fast. So the savvy businessman might as well do what a savvy businessman does. You don’t get rich by being generous with your cash.

1 thought on “Arte Ep. 5: Two men and their tsuntsun bond”