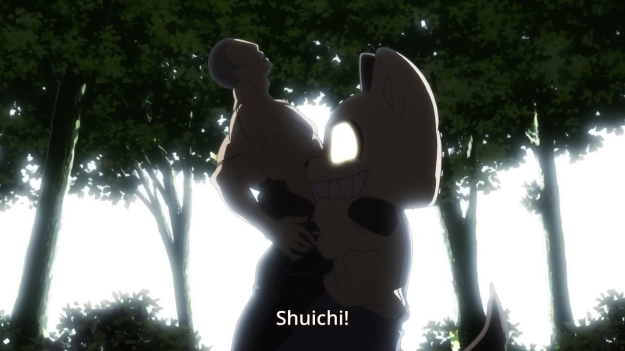 Sometimes, you gotta give someone a manly hug before they can become your friend.

— In the cold opening, a girl looking for coins runs into a bunch of monsters instead. She transforms in order to fight back, but considering how she’s surrounded, I doubt things turned out in her favor. Unfortunately, she doesn’t show up again for the rest of the episode, so her fate is left to our imagination.

— After the OP, the story begins in medias res; the kids have already found their first opponent, and he looks pretty strong. I’m not particularly interested in long, extended fights, but I guess it can’t be helped.

— Starting from the beginning, Clair calmly explains to her partner that they can’t go into this blind. In order to gather coins, they first need to gather information, i.e. potential allies, potential opponents, the relative strength of other monsters, where to even start looking for coins, so on and so forth. Like usual, Shuichi will leave most of the decision-making to Clair.

— What does Shuichi bring to the table other than his raw strength? Well, as the tryhard, “I’ll always protect my friends” type of protagonist, he’ll have his morals. This allows him to protect Clair in more ways than one. Obviously, he won’t let her die, but more importantly, he’ll keep her from losing her humanity completely. Shuichi always has to remind her that they need to be the good guys.

— It’s funny to hear Clair go on and on about how they need information, but as soon as Shuichi detects another monster, she blindly rushes in to confront them. Sure, I understand the idea of taking the initiative, but maybe when your potential opponent has huge, hulking blades for arms and you’re just a furry suit, you might wanna reconsider your next move.

— I’m not too thrilled about the kids’ first opponent on these mountains. In a lot of these shows, there’s always a guy who’s a battle freak. He’s completely neutral when it comes to the grand scheme of things; he doesn’t really care about the coins. Instead, he’s just here for a good fight. Darwin’s Game had a character just like this. Gleipnir‘s version is slightly meaner, though. It sounds like he beats up people for the hell of it.

— Seeing the battle freak up close, Clair admits that she might have made a mistake, but Shuichi suddenly charges in and throws a punch. Well, nobody ever said that their teamwork was perfect. These two are gonna have to level up their social link. 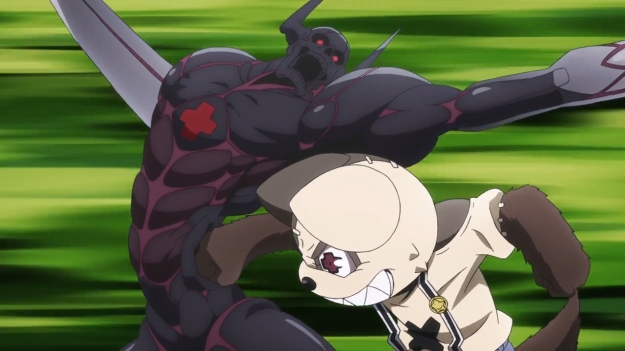 — So the fight begins in earnest, but I’m not particularly interested in breaking it down. All we need to know is that our duo can’t compete against their opponent when it comes to raw strength. Even when Clair whips out their revolver and takes aim, the battle freak calmly blocks the shot. All they got out of this was his name. Hm, if only there was a way to keep him pinned down…

— …which is exactly what happens next.

— Their opponent doesn’t really understand why there are two of them (of course he doesn’t), but he realizes that the recoil from a gun this big would probably kill the girl. As a result, the battle freak accepts his defeat. Blah blah blah, they exceeded his expectations in this test of strength. They are willing to put their loves on the line. Yawn

— Nothing peculiar about this angle. Yep, nothing at all.

— Unbeknownst to our trio, someone is peeping on them, and they are particularly interested in Clair. Man, when it comes to these types of shows, the threat of rape is sadly always around the corner.

— Tadanori is all about manliness, and this is why he claims he doesn’t have a phone. I’m not sure what’s unmanly about cell phones, but okay. Despite all his machismo, however, he blushes at the sight of Clair in her underwear. Obviously, I don’t subscribe to some arbitrary code of manliness, but shouldn’t stereotypical macho guys be into half-naked girls?

— The creep finally reveals himself, and I guess his monster form is a goblin. Eh, makes sense. Recent anime prortrayals of goblins have been straight up rapey, and this guy doesn’t hide his intentions.

— What’s funny, however, is how colossally stupid the goblin is. If he’s been watching the trio fight, then why would he openly approach them? This isn’t at all how you blackmail someone. It’s like walking up to a guy holding a gun and demanding all his money. He’d just shoot you. So guess what? Tadanori just casually turns back into his monster form and just cleaves the goblin creep in half. Well, I suppose goblins aren’t known for their intelligence.

— In any case, we know that Tadanori is willing to be an ally. He’s like a simple-minded animal. If you can prove that you’re alpha, he’ll join your pack and take orders. As long as he gets to have his shounen-esque battles, he’s a happy customer. This is all fine and dandy for Clair because Tadanori has no qualms about getting his hands dirty. 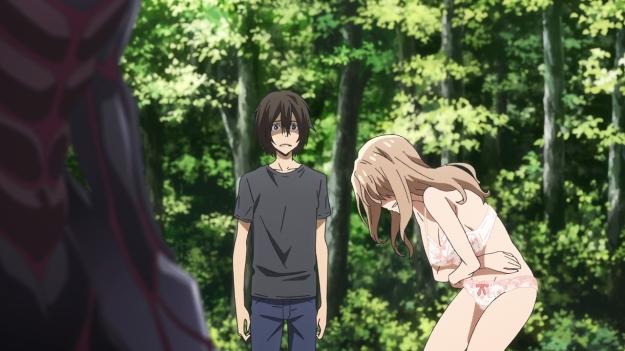 — Shuichi has a normal response to the goblin’s death. After all, even a dead creep is kinda disturbing. On the other hand, Clair is doubling over in laughter. Again, I feel like Shuichi is the only person standing between her and her loss of her humanity. Well… she’d be dead without him, but you know what I mean.

— Nevertheless, his low self-esteem gets the better of him again. We quickly learn, however, that Clair was initially supposed to run away. The only reason they got the upper hand against Tadanori was because she’d never abandon Shuichi. Still, he was ready and willing to die for her, so y’know… your typical tryhard, “I’ll always protect my friends” protagonist. Look, I’m not trying to imply that Shuichi shouldn’t be a good person. Obviously not. But protagonists like him are a dime a dozen in anime, and he isn’t particularly bringing anything new to the table. He’s a good guy, but good guys are often boring. The only thing about Shuichi that is somewhat interesting is that he keeps Clair from completely losing it.

— Speaking of Clair, she’s found potential new friends. What’s with the Celty Sturluson wanna be on the right?