A show that is already full of fanservice apparently feels the need to up the ante.

— Clair and Shuichi have found a new group of potential allies, and naturally, it’s pretty much a ragtag bunch. I’ve already called the girl in the middle a Celty wannabe — an anorexic Celty, in fact. Look how skinny her limbs are. She’s flanked by Scary Blanket and a male host from a caberet club. But wait, we have more! There’s The Spy Who Creeps On You and Nina Tucker from Full Metal Alchemist!

— Last but not least, these dorks are led by Sexy Jason Voorhees. C’mon lady, it’s not even Halloween.

— Tadanori will remain Clair and Shuichi’s ace in the hole, I guess. He won’t join the party, so he’ll take a backseat until they conveniently need his brute strength.

— Shuichi wonders if he and Clair were somehow brought together by coincidence or if someone had pulled their strings. She doesn’t really have a good answer. She just attributes their partnership to destiny. Clair makes it sound as if they have a special bond. Maybe, maybe not. If Shuichi feels the same way, he certainly doesn’t show it. He continues frowning as she embraces him.

— Last week, Clair wanted to hide their true identity, but it didn’t work. She had to climb out of Shuichi in order for them to beat Tadanori. This week, the group won’t let her join unless she performs a special pact. Naturally, said pact can’t be done unless Clair climbs outta Shuichi.

— For the secret pact, the leader of the group strips down to just her panties. Um, okay.

— Meanwhile, Ikeuchi freaks out just because Anorexic Celty — her family name is Yoshioka — wants to pet Shuichi’s costume. Sounds like someone has a crush, but with a bowl cut like his, he’s never gonna win anyone’s heart.

— When Clair returns to grab her phone, she doesn’t look too happy to see Yoshioka all over Shuichi. She doesn’t say anything, though. After all, she’s about to get some action herself.

— It’s funny how they can’t really hide her breasts with her hair from this angle, so they just flat-out decided not to draw her nipples. That’s what makes something truly dirty, kids! It’s the nipples! 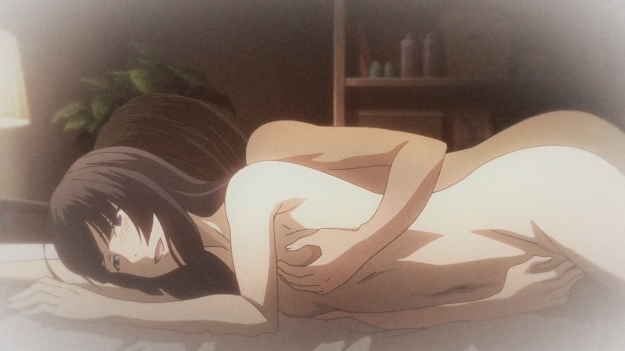 — Clair doesn’t hide her goals; she straight up reveals that she’s looking for her sister. In return, Sexy Jason Voorhees gives us a sob story about how her teacher broke up with her because the latter had a strong moral compass. I dunno, man. I don’t think someone with a strong moral compass would’ve slept with her student in the first place. In any case, Sexy Jason Voorhees tried to confide in a friend, but said friend betrayed her. As a result, Super Moral Teacher decided to kill herself. Womp womp.

— What’s the point of the sob story? Well, it explains why she now has the power to punish traitors. If you reveal the group’s secret, you die. If you feel as though you’ve betrayed the group, you also die. The last one is kinda iffy. If someone can somehow delude themselves into thinking that they haven’t hurt the group, then can they spare themselves from death?

— Yoshioka reveals that she’s not too different from Shuichi. Like him, she just wants to protect her loved ones. She then convinces him to help her find her wallet, so at some point, she’s gonna get inside him. Since Clair is busy cozying up with another partner, you just know that Shuichi has to do the same. Tit for tat. Plus, it’s often said that you need to have multiple partners to truly be good at sex… or at the very least, appreciate what you have.

— Hell, it wouldn’t shock me if a dude becomes his partner at some point in the future. The only question is how many people are gonna end up wearing Shuichi before this series is over.

— Away from the rest of the group, Yoshioka takes off her helmet to reveal that she has (I assume) dog ears. Essentially, she made a wish to better understand animals, but like with everyone else, the Alien’s evil monkey’s paw instincts kicked in and turned her into a furry.

— The search for the wallet isn’t going too well, because Shuichi tracks things by scent. If the wallet smells like the girl, and the girl is right next to him, then she’s just gonna keep being a false positive. So what’s the solution? Let’s have sex! 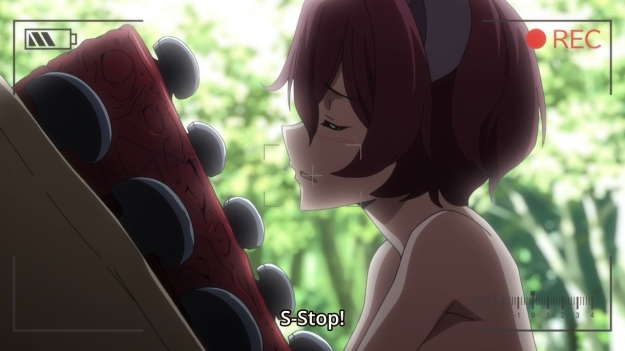 — Naturally, Ikeuchi followed them into the mountains, so he’s getting his dumb bowl cut ass NTR’d. I can assume that Yoshioka knows nothing about his crush on her, so he only has himself to blame for his inaction.

— And now that Shuichi’s partner count has doubled, he gets to compare them. The problem is that anyone wearing him can feel his emotions, so Yoshioka knows right away how he truly feels about Clair. But before she can reveal it to us, he cuts her off. Well, someone’s not being honest.

— For some reason, Yoshioka rides Shuichi completely buck-naked. He tries to be a prude about it, but again, he can’t hide his feelings from anyone inside him. I dunno, it seems kinda unsanitary to have someone’s crotch rub up against your insides.

— Back at the hideout, things are about to get spicier when Clair finally voices her reluctance. And that’s honestly it. Sexy Voorhees stops and performs the actual ritual. You just have to wear a necklace made out of her hair. Once you do, it nastily sinks into your skin. So what exactly was Sexy Voorhees trying to accomplish with all the skinship nonsense? What was this whole rigamarole for? Clearly, she didn’t need to strip down. Clearly, she didn’t need to rub Clair’s crotch.

— Right before the episode ends, some super skinny kid by the name of Subaru picks up Yoshioka’s wallet. Welp, we’re probably gonna get a fight between him and Shuichi.

— We’ll see how they develop over the course of the series, but personally, I don’t find Clair and Shuichi’s new allies all that interesting.