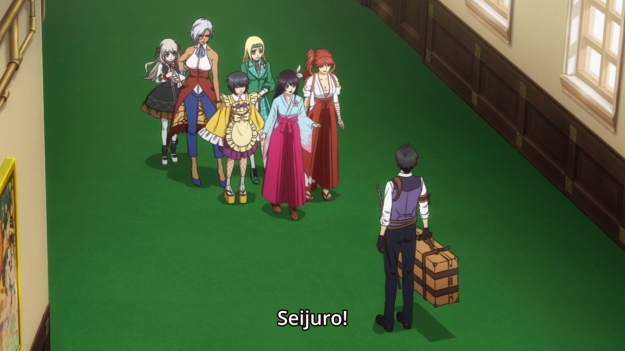 And just like that, Seijuro is gone again, but we’ll get to that in due time.

— I wonder why Seijuro has such a small presence in the anime series. Is his voice actor busy? Or did the writers just want to focus on the girls and their friendships? Either way, Seijuro in the game is just your bog standard harem lead. As the player, you kinda determine his personality through his dialogue choices, but there’s nothing too out of the ordinary. Hell, you’re even given the option to creep on the girls, i.e. stare too intently at their chests, try to peek on them in the bath (which makes you a criminal), so on and so forth. Luckily, all of those actions are completely optional.

— Sumire tells Seijuro that the team still doesn’t know who’s targeting them, so I guess she’s as blind as the rest of the girls. She also tells him that he’ll need to return to Europe. Apparently, some special mecha got stolen. Speaking of special mechas, I’m at the part in the game where Sakura gets an upgrade. Said upgrade, however, is bizarrely missing from the anime series. Not sure what’s up about that. Maybe it gets destroyed before the game ends or something.

— I also don’t understand why WLOF HQ is such a headache. So these Combat Revues are full of awesome people (except Moscow for some reason), but the people in charge of them are evil and shady? How did that happen?

— Seijuro informs Sumire that there are no existing records of Valery joining the Moscow Combat Revue. Again, they receive an obvious clue as to who is after them. C’mon, guys… put two and two together.

— Meanwhile, the girls are busy doing something very important: giving their beloved captain a home-cooked meal. It was initially Sakura’s idea, but while she’s busy fantasizing about playing the “Good wife, wise mother” role with Seijuro and Klara, the rest of her teammates won’t be denied. This is just par for the course, really. Harems are gonna harem even if Sakura is probably the canon love interest. She’s the childhood friend, after all. I’ll probably pick her when I get to that point in the game. Claris is my least favorite, and Azami may as well be as young as Klara.

— Sakura whips up a couple of Japanese dishes for her captain. I’ve never had nikujaga (a homey beef stew), but it doesn’t look too hard to make. The only ingredient I don’t have in my pantry is the konnyaku noodles, which I’m personally fine without.

— Anastasia makes Greek food. I had no idea she was Greek. Honestly, I never even really cared what her ethnicity was. Either way, I’m not a big fan of fish eggs in general, which is the primary ingredient in taramasalata.

— Claris is apparently from Luxembourg. Again, I never really thought about her ethnicity while playing the game.

— Well, Klara is from Russia, so I guess stroganoff makes sense. Like a lot of people, I prefer stroganoff with egg noodles instead of rice.

— Last but not least, there always has to be one girl who can’t cook, and unfortunately, Azami gets that dubious distinction. In the game, she has a short arc where you wonder if she truly is a ninja. It turns out that she is, but I think it would’ve been better if she had just been an ordinary girl who somehow trained so hard that she developed ninja-esque skills anyway.

— Later that night, Klara gets a front row seat to Seijuro and Sakura’s flirting. I don’t know why those two don’t just become a couple already, but I guess harems gotta harem. We can’t pick a girl no matter what (even though plenty of shows have done it like Shuffle!).

— The next morning, Seijuro and Sakura are gonna spend some time together, and Klara is invited to come along with them. Unfortunately, the rest of the team has nothing better to do, so they’re going to pull out all the stops to try and ruin the “date.” Hell, even the lady who runs the confectionery store is here. I guess they just let all sorts of civilians into the operation room, huh?

— Komachi is the only sensible person in the entire group, but she’s probably just counting the dollars she’s not making due to this distraction.

— The “family” trio were about to hit up an amusement park when Hakushu shows up. She then warns Sakura that they’re being followed (even though she’s probably only here because she followed them as well). From here, you can obviously tell that Itsuki is spying on them. But of course, we’ve already established that Sakura is blind so she can’t tell who it is. Ironically, the trio are being followed by the bad guys.

— Speaking of which, as far as I know, Itsuki is just one crazy fan in the game.

— What follows is a wild goose chase through the city. Eventually, the trio escape their pursuers by hopping on a boat. The rest of the girls finally realize that Klara is with Seijuro and Sakura, so they accept that it’s not a date. But how did they only notice Klara now? Again, willfully blind…

— I’ll admit that I enjoyed this bit of slapstick comedy. Anything that embarrasses the Moscow Combat Revue is A+ is my book. 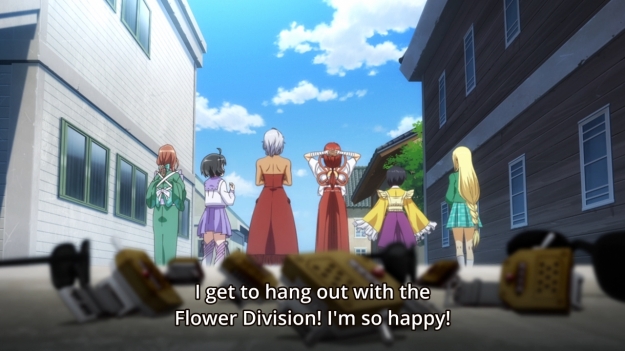 — So uh, you guys are just gonna dump all that special equipment on the ground? These girls are a bunch of litterbugs.

— Even though Valery just embarrassed himself, he still tries to act cool. He also claims that it’s time for them to get serious. Ah, just in time for Seijuro to leave.

— Speaking of Seijuro, he and Sakura have a talk about how they’re like a real family… which is also a prominent theme in the game, so it feels like we’re treading old waters. I mean, if this is a sequel, then why bother? After what they’ve gone through in the game, it should already be given that they’re a family. But if you’re retreading this theme for people who might not have played the game, then why make a sequel?

— Seijuro gives Sakura a bell as a parting gift. I’m not well-versed on Japanese gift-giving customs, so I really don’t know what the bell signifies. Judging by Sakura’s reaction, however, I guess it’s meaningful?

— Last but not least, Sumire gets an invitation to Smash.