Shuichi has changed, but is it for the better?

— The story continues with Elena confronting the Alien. He uses specious reasoning to absolve himself of any responsible. In his mind, he simply gave people power. What they do with it is completely out of his hand. That’s not really true, though. It’s like giving guns to children. Those kids may have pulled the trigger by their own “free will,” but it’s still irresponsible to let them have guns in the first place. And to an highly-evolved species like the Alien, we humans are kinda like children.

— Elena threatens to kill the Alien, but I guess it wouldn’t matter anyways. Something happened in the past that has irreparably altered the course of history, and killing the Alien won’t make a difference, right? On the other hand, if the Alien is no longer around, no one new will gain any powers. That might simplify things for Elena’s group. Well, it doesn’t matter what we think, because Elena ends up not killing him anyways.

— Back in the forest, Shuichi feels conflicted over what he and Clair had just done, which is understandable. He’s not a monster. He’s not soulless. Even if killing Madoka’s group was the only way to defend themselves, few people — especially kids like Shuichi — would ever want to take a life. All Clair can do, however, is offer silent support while Chihiro looks on as a third wheel.

— The group is now divided, because honestly, they’re just kids. I like to think most people would react much like how Sayaka does here. She thought she and her friends could play as heroes, but reality is much more grim. As a result, they want to back out, and that’s totally understandable. Even a lot of adults wouldn’t have resolves strong enough to keep pushing on.

— Clair, however, is different. She has already faced tragedy by losing her family. Until she met Shuichi, she was all alone with her feelings of powerlessness. Now that she finally has a chance to do something — to potentially save her sister — she obviously not going to back out now. But the other kids don’t understand her history, so they see her as a cold, uncaring monster who can kill without any hesitation. She killed for them, though. Who knows what would have happened to them if they had joined Madoka’s group. Even if they fear her, I just think they should be a little grateful.

— Later that night, Shuichi confides in Clair, revealing how he ultimately came to the conclusion that he had to kill the other group. Even though he probably did the right thing — that he needed to fight back — killing a bunch of people is never a decision that one can take lightly. What he did earlier that day will be with him for a long time. In response, All Clair can do is apologize for pulling him into this mess. Maybe she only saw him as a useful pet or tool with no autonomy of his own. She would make all of the decisions, and as a result, she would shoulder all of the moral culpability. He can be her gun, but she thought she would always be the one pulling the trigger. But Shuichi isn’t neither a pet nor a tool despite his monstrous appearances, so Clair is getting more than she bargained for. 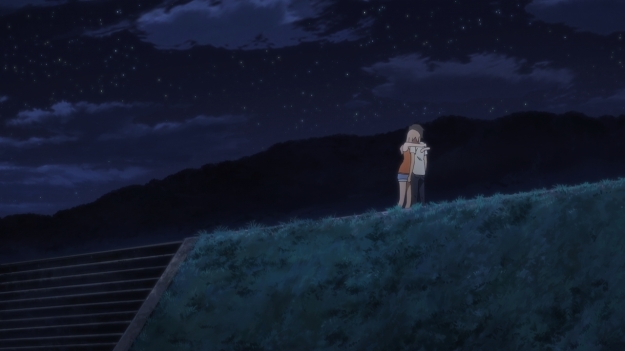 — To be fair, Clair didn’t originally pull him into this mess. It’s more accurate to say that she pulled him back in when Elena had gone to such lengths to spare him. At least, that’s what I assume. I assume that he didn’t want to lose his memories. I assume that he didn’t want to spare himself while the rest of his old friends continue the fight. After all, isn’t this why his urge to keep fighting is slowly resurfacing? We’ll see, though. After all, we still haven’t learned what his old friend group did, and why they’re now trying to clean up their own mess.

— Clair asks if Shuichi will eventually go back to Elena, but with his impaired memory, that’s not a question that he can answer. Nevertheless, he claims that once he discovers that answer, he’ll truly be able to “become one with [Clair] for the first time.” Huh. Why is she so important to him? I know why he’s important to her. He saved her life, and he lends her his power. But why does he care this deeply about her? She forced him to help her. She then forced his hand and killed a person. When did the switch flip? When did she become so important to him? And once he remembers his old friendships — and perhaps his old relationships — will he still feel the same way about Clair?

— In any case, Shuichi has put Clair back into a teasing mood, so that’s something. She’s probably down to mess around too if he wasn’t such a typical innocent anime protagonist.

— Apparently, Chihiro goes to the same school as Shuichi and Clair. But even though she gets to meet him one-on-one, she doesn’t really say what she wants to say. I guess a part of her is still conflicted about what to do next. People like Chihiro aren’t typically decisive.

— Shuichi soon learns that Abukawa has gone missing. After a while, he comes to the realization that the guy might have been a part of Madoka’s group. Basically, everything has a price. He saved Sayaka’s group, but he may have killed a friend in the process. But was Abukawa really a friend, though? After all, he was involved in a gang of murderers. There was a side to him that Shuichi never saw. I don’t think he ever really knew Abukawa. If he did, they probably wouldn’t have become friends.

— Our hero eventually tries to get some answers out of the Alien, but that’s obviously a fruitless endeavor. In fact, the Alien turns things around on Shuichi and offers the kid a way out. He can turn Shuichi back to normal, and he can just walk away from this conflict. Shuichi’s smarter than this, though. Sticking his head in the ground isn’t going to make the conflict go away. It’s going to keep growing, and hell, it has already leaked into his private life when Abukawa died. Eventually, more and more of his innocent friends are gonna get involved. Something like Nana. If Shuichi wants to make sure that classmates like Nana never have to suffer, then he can’t really back out.

— Interestingly enough, had he taken the Alien’s offer, things might have turned out really badly, because Madoka’s right hand man wants revenge. Luckily, he kept his powers, so he has no problems dealing with one pathetic samurai wannabe.

— The guy was really after Clair, ’cause he assumes (rightly) that she is the mastermind behind the poison flowers. Still, Shuichi was with her every step of the way, so he’ll take on the burden of silencing anyone who might come after her. He even gets a call from Clair towards the end of the fight, so she gets to hear him kill someone. For the first time ever, he does it on his own. Again, she got more than she bargained for by pulling Shuichi back into this conflict. She wanted his support in her mission to initially track down her sister, and the price was turning Shuichi into someone like her — someone who can make the decision to take a life. He even tries to reassure her right before pulling the trigger. But like he said, this is the only way they become one.

— Elsewhere, the Alien thinks back to his first encounter with a human. It turns out he never really wanted to find his friends. The idea to grant people’s wishes also wasn’t his. It all came from Honoka, one of the girls in Shuichi’s original friend group. She probably got the idea from a book or manga, and didn’t consider the potentially dire consequences that such an idea could entail. After all, it’s pretty obvious to most of us that there are people out there with some messed up desires. You wouldn’t want them to find a coin.

— So what exactly happened to Honoka? Beats me. But we cut to this guy with the crazy anime hair. He’s protecting the crashed alien ship from coin collectors, and when he calls forth his power, a sad-looking Honoka comes out. Is that her? Or is that just a copy of the original Honoka? Either way, she looks like she wants to be freed from her current state.

— It’s kinda weird to drop such a major revelation in the 11th episode, though. This season is just about over, right? So we’re destined to end on a cliffhanger with no satisfying resolution in sight. Tch. This is why anime adaptations of ongoing manga series can be such a pain.