…whether or not you really want to.

— It’s the new school year, but not much has changed. Arisa hasn’t bumped into Kureno lately, so she takes her anger out on Kyo.

— There’s also the fact that Kyo is now aware of his own feelings for Tohru, but she’s still as oblivious as ever. The only difference now is that Saki now gets to tease him about it.

— This episode is really about Yuki and his new colleagues in the student council. At first glance, they seem kinda annoying, but since he needs to step outside of his comfort zone, he may as well embrace this opportunity. And boy is it hard for him to come out of his shell. At one point in the episode, he’s giving a rather generic speech to his new team. Blah blah blah, I’m gonna work hard, please work with me, and all that jazz. Nevertheless, this is a huge struggle for him. He’s clenching his fists as if he’s doing something truly stressful and strenuous.

— Alright, let’s get to know these student council members. First, we have Kimi. She seems like a rather shameless and childish flirt. She also likes to piss off Yuki’s fan club for her own amusement. Kimi certainly isn’t someone I would want to befriend, but as the student council president, Yuki is just gonna have to suck it up.

— Then we have the overly intense Naohito, who likes to flip out over minor things. Also, he considers himself to be Yuki’s rival for some reason. Rival in what, though? Academics? Love? Last but not least, he’s also a secretary like Kimi. How many secretaries does a student council need.

— We’ve already met Machi, and her issues are still the same. Like before, she almost never talks; actually, I don’t think she utters a single word in this episode. And again, she’s oddly messy for someone who is supposed to keep track of the budget. I probably said this the last time we saw her, but there’s probably a sob story behind her sloppiness.

— Finally, we get to the lazy and easy-going Kakeru. Like Machi, we’ve met him before, but we gain a few extra insights into his character in this week’s episode. Yuki notes that people are naturally drawn to Kakeru, and this makes him jealous. The latter, however, reveals that he actually has issues understanding other people’s feelings. Maybe since he’s always loud and boisterous, he doesn’t give himself enough time to pause and reflect. I don’t really know him, though. It’s all just armchair psychiatry here. 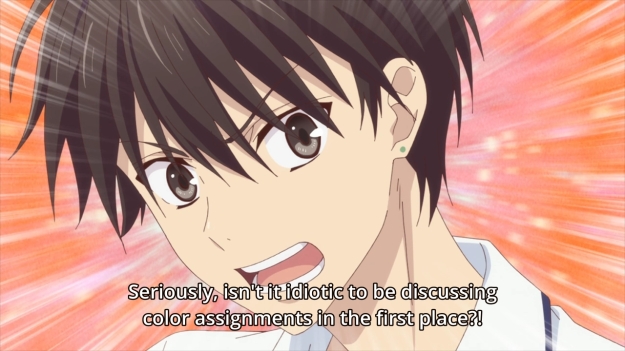 — Does this episode feel meaningless? Yeah, I kinda felt that way as I was watching it. I mean, at one point, the group discusses their color assignment. For example, Kakeru wants to be black because it makes him feel “cool and stoic.” Kimi wants to be pink, because… I dunno, cute and girly? Meh.

— It isn’t until the episode is nearly over when things suddenly take a turn for the serious. Honestly, the drama came on so fast that I almost got whiplash from it.

— Towards the end of the day, Kakeru spots Tohru walking home with Kyo, so what does he do? He decides to prod Yuki about it. In his anger, Yuki berates Kakeru for trying to judge people by their levels of happiness. This in turn pisses Kakeru off, so he goes and kicks a tray of saplings out of Yuki’s arms. Whaa…?

— It’s just like in previous episodes. Remember when Arisa flipped out over Kureno in public? Or Mayuko breaking down and sobbing also in public? Well, we now have Kakeru destroying those poor plants for no good reason. These people need to get help, ’cause that is not a proportional response.

— But both boys’ anger subside just as quickly as it had come on. Yuki admits that he’s jealous of people like Kakeru and Kyo; he also wishes he could stop comparing himself to others. On the other hand, Kakeru wants to be more sensitive to other people’s feelings. Well, kicking some poor plants isn’t gonna solve that problem. But hey, the point is that they’re both secretly jealous of each other. And just like that, those two make up. Bah.