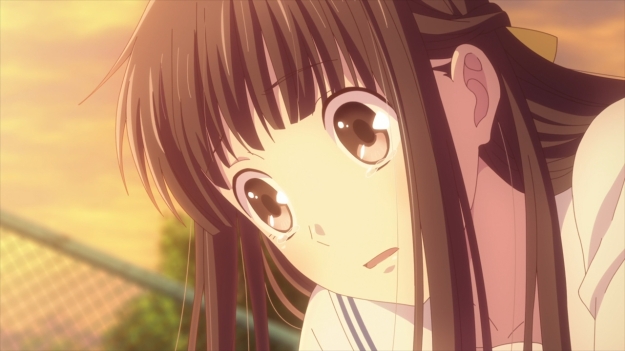 Time for another feels trip, folks. The problem, however, is that everyone is bummed out in this week’s episode. There’s no focal point. Instead, we just jump from one sad child to another. When I hear someone’s story, I try to put myself in their shoes. I try to imagine what it must feel like to be them, what thoughts might run through their head, what solutions they might come up with. It’s a process. Maybe it’s a flawed process. After all, I’m trying to take something so emotionally subjective and break it down logically. I’m not allowing myself to just feel… I can’t feel unless I go through this process of mine. So when Fruits Basket throws one sad child after another at me — all within a 24 minute episode — my process can’t keep up.

Hm, Tohru’s grandfather just strained his back, so now he’s bedridden. I’m sure she’s worried about his health. Not only that, he kinda represents one of the few living connections she has left to her late par–… oh wait, Kyo has apparently been distancing himself from everyone ever since he met up with Kagura. I doubt he has second thoughts about rejecting her, but now that he has no other distractions, his thoughts must be focused solely o–… Hatsuharu is slowly starting to give up on winning Rin back. The longer they stay broken up, the more likely he’ll accept that she truly doesn’t care about him anymo–… Yuki feels as though he has to get his ducks in a row before he can move on, which means going back and confronting his moth–… ah, Kagura is here, and maybe she knows what’s going on with Ky–… nope, gotta deal with Rin before she escapes again!

Ahhhh, this is maddening! I just end up feeling… emotionally numb, I suppose. It’s like I don’t know who I’m supposed to empathize with. All of them, I guess. But I can’t emotionally digest all of their stories in such a short amount of time. It’s like trying to plug a leaky boat. As soon as you solve one problem, another problem comes up.

Towards the end of the episode, a visit with Tohru’s grandfather triggers a sad memory she thought she had long buried away. So I start thinking about the parallels between her late mother and her grandfather. When she was alive, Kyoko once wished she could see her late husband again. Tohru naturally cried when she saw that her mother was sad. Moreover, the only way Kyoko could see her husband again was to abandon her daughter and die. What can a child do but try to hold onto her mother? So what does she hear from her grandfather now? Well, he starts off by fondly reminiscing over Kyoko and Katsura’s relationship. He eventually wishes that he could just see them once more. The old man isn’t suicidal, but we all know what his wish implies. If he wants to see them again, he’ll have to pass on from this mortal coil. He can only see them in the afterlife. And that’s the thing! No one would ever say this out loud, but we obviously think about it. We think about how old he’s become. We think about the years he has left. We just don’t say any of this out loud. Thinking about his late son and daughter-in-law is an indirect way of looking over his life and confronting his mortality. And Tohru surfacing an old memory is an indirect way of realizing that her grandfather may also abandon her one day. 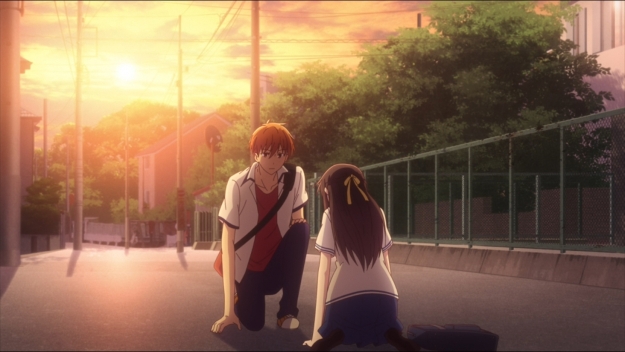 So here I am, stewing on this when Kyo suddenly shows up. For the first time all episode, he’s not wearing a frown on his face. After all, Tohru has collapsed in the middle of the street, so he has to have both the physical and emotional strength in order to pick her up and put her back on her feet. This relates to how Yuki and Rin both feel as though they don’t have the strength to go forward on their own. Obviously, there’s no shame in accepting other people’s help, but the headstrong Rin doesn’t agree. Maybe she feels that she can’t protect Haru if she can’t protect herself. But I digress. Did Kyo work out his issues offscreen? Probably not completely. He’s one of those people who has to accept other people’s help as well. But for the moment, he needs to be there for Tohru, and the fact that he no longer seems to be down in the dumps is enough of a pick-me-up that it distracts Tohru from her worries over her grandfather. But that’s the best I’ve got.

I kinda focused my empathy process on Tohru and Tohru alone this week, because she’s the character I know best. I still haven’t really wrapped my head around Rin and her worries, because it has yet to become the focal point of any singular episode or story arc. Plus, she doesn’t do herself any favors by pushing everyone away. Obviously, she’s putting up barriers, but in doing so, she seems quite unlikable. On the surface, at least. Honestly, I kinda roll my eyes every time she shows up.

The only other thing I want to say is that I rather like the bond between Haru and Yuki. Haru isn’t afraid to open up to Yuki, and likewise, Yuki isn’t afraid to shed tears in front of Haru. Your mileage may vary, but on a lot of message boards, men seem to express this shared belief that they can’t open up to others without having their own worries used against them. They feel as though it’s a trap. Whether it’s true or not, their SOs often feel disgusted if they open up about their thoughts and concerns. This Reddit thread has a lot of examples. Again, I don’t know if it’s true or not. I don’t have any numbers to support any claim. I just think it’s nice that Haru and Yuki can be vulnerable with each other without any restraint.

Last but not least, Yuki’s face during the big smooch was pretty hilarious.