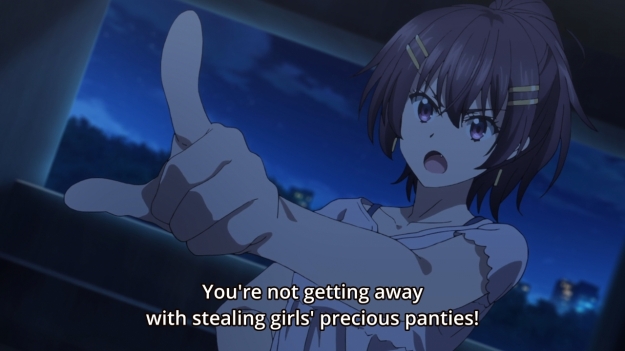 Let’s just get this over with.

— At the start of the episode, the gang is trying to apprehend a couple of panty thieves. Unfortunately, one manages to get away because Kirara still can’t freely use her powers. Hell, she can’t even hurt a bug. By the way, why are all the villains female? I guess that’s a plot point to be revealed later.

— Back at base, Momoka gets on Kirara’s case, because this is apparently the third time she’s failed out in the field. It turns out that our heroes need to store up “H energy” by constantly having dirty thoughts, and Kirara has been neglecting to do so. Momoka has a quick-fix solution, but unfortunately, Kirara is a bit too sex negative to employ it. You have to wonder why she even decided to join the team if she’s this uncomfortable around sex. I mean, it’s kind of a hard requirement for the job.

— Do people really find that fang thing cute? Like if a real life girl actually has a tooth sticking out with her mouth closed, would you actually find her cute? Probably not. This is probably one of those weird moe shit that is exclusive to the realm of 2-D.

— We learn a bit more about Momoka this week, and it turns out that she has an inferiority complex. She’s both a brilliant student and an amazing athlete, but because her sister is a hot model who gets all of the boys, Momoka has a negative opinion about herself. Feelings can be so irrational, huh?

— The girl eventually sees a news program promoting soy milk as a means to getting larger breast. But instead of simply drinking it, she’s instructed to pour it on her breasts and then give herself a massage. Welp, at least soy milk can’t go rancid in a hot bath…

— Where did the whole “rub your breasts to make them bigger” idea even come from anyway? Did some dude trick his gullible girlfriend with it and the belief somehow spread even though it’s patently untrue? Or is it one of those “I know it’s not true, but I want to believe” kinda nonsense?

— Not surprisingly, Momoka ends up passing out in the bath, so Ret has to “save the day” and carry her to safety. And when his “H energy” shoots up as a result — totally not an erection joke! — Momoka’s mood improves considerably. Ah well, harems gotta harem.

— In the second half of the episode, Ret not only manages to stop the panty thief, he even keeps his pants on this time. That’s progress!

— Anyways, Ret and Kirara continue to be boring until someone finally makes a move. Unfortunately, that someone ends up being Sora, who has one again “mistaken” Ret’s room for her own. Uh-huh. I’m sure that’s believable in this harem anime.