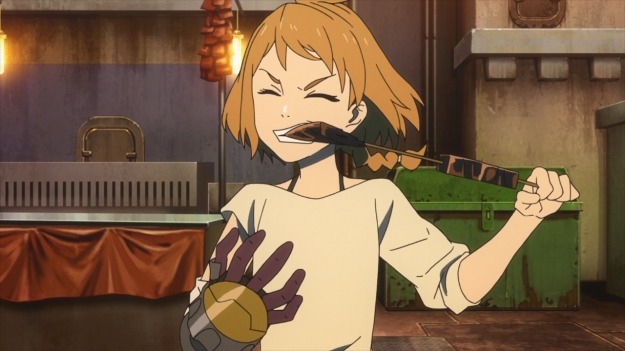 If you’re wondering about Re:Zero, I’ll get back to it a little later in the week. It’s just been hectic lately. Alright, time to start this episode.

— Kaburagi predictably orders Natsume to hang back, because he doesn’t think she’s ready for a real battle, but she’s in that rebellious teen phase. This also establishes a pattern where the girl’s gonna assert herself against her “father’s” wishes.

— At first, the horrors of war sends Natsume into a panic, but Kaburagi did train her well. As a result, the girl eventually collects herself and starts gliding around the battlefield much like her teacher. She even manages to take down this bad boy by herself and thus impress her idol in the process. In fact, had she stayed behind like Kaburagi wanted her to, Pipe would’ve died. I guess all those boring training montages from last week’s episode really helped out!

— Pipe is kinda like a pug… which means he’s butt-ugly. Yeah, that’s right. I don’t l like pugs.

— Some seemingly badass Gadoll shows up and starts wreaking havoc, but its only purpose here is to help Kurenai show off her moves and look cool. Meh.

— Speaking of Kurenai, she immediately invites Natsume to join The Power as soon as the dust settles. I guess she just has the power to do so. It’s not officially sanctioned by the System or anything, but it’s clear that they’re not exactly watching humanity’s every move. I suppose that might be their downfall.

— And apparently, Kurenai has a huge crush on Kaburagi. Ah, if only she knew he was some dorky-looking cyborg… well, she might still like him anyway.

— All of a sudden, we’re told that they’ve located the Gadoll nest. There’s only one? And the Gadoll Nest is all the way up on Mount Everest, so this is gonna be a hard battle. Still, if you can take it out, you’ll win the war and achieve peace for mankind!

— But how can this be?! It’s only the fourth episode! The war can’t be over yet! Well, Kaburagi soon learns that this is a scripted event. Humanity’s gonna lose, and humanity’s gonna lose hard. And in doing so, this will pave the way for “legends” like himself to triumphantly return. This is how you draw the viewers in and drive up those ratings. Unfortunately, profit doesn’t always coincide with preserving human life, but hey, we (especially Americans) already know this sad truth!

— Naturally, Kaburagi is horrified. Not only has he taken Natsume under his wing, she’s kinda like his daughter now. He doesn’t want her to die. Plus, Kaburagi actually lives alongside humans. He doesn’t really take his time to interact with them, and even when he does so, he’s always surly. Nevertheless, a small part of him has to feel bad for humanity, right?

— Having played through the Muv-Luv trilogy in recent weeks, I can’t help but make a few comparisons in my head. I won’t bore you with my extensive thoughts, but I do have a few things to say. Obviously, the main threat here isn’t the Gadolls. The System are truly the ones keeping humanity in bondage. Still, it wouldn’t hurt to have some more world-building, especially with regards to the Gadolls. It would also be nice to set the stage a little. What’s at stake if they don’t wipe this Nest out now? Are they adequately prepared? Should they take more time? Have they developed any countermeasures? These minor details add up in the long run… and, well, they’re completely absent from Deca-Dence. Again, I know that the Gadolls aren’t the main focus, but to just jump from a couple of battles to the Gadoll nest feels so abrupt to me. I don’t really feel invested in the upcoming battle as a viewer. Even though Kaburagi is worried about Natsume, I already have it at the back of my mind that she has thick plot armor strapped to her chest, so she’s gonna be fine. The other schmucks might die, but who cares? I don’t even know them or what they’re fighting for. But hey, I guess if you only have a single cour to tell your story, you’re gonna have to make some narrative sacrifices.

— Natsume is introduced to her new team, but team leader Mindy doesn’t seem too impressed with the new recruit. I wonder what crawled up her ass.

— Unfortunately, that’s not the end of Natsume’s very bad day. When she tries to reach out to her BFF Fei, the latter gives her the cold shoulder. I kinda understand how Fei feels. She’s pushing her friend away so that it won’t hurt as much when tragedy strikes. And hey, she’s seen enough people die on the battlefield. On the flip side of the coin, however, when your best friend is going into a huge battle, it’s pretty snotty to treat them like shit. Fei’s trying to protect herself, but that makes her a pretty bad friend.

— Last but not least, Kaburagi also tells Natsume to pull out and for good reasons… good reasons that he can’t reveal. He tries to dance around it by mentioning how the war has gone on for hundreds and hundreds of years. But unless he’s willing to spill the beans, she’ll never really understand. He comes close at one point, but he cuts himself off. Well, it is only the fourth episode. Anyways, when it’s clear that Natsume won’t be convinced, Kaburagi destroys her combat gear… which is kinda silly. She’s in The Power now, so they can just provide her with a replacement.

— After facing one doubter after another, Natsume goes and seeks advice from her idol Kurenai. Here, we see these two act as extensions of humanity itself. Kurenai fights because hiding within the mobile fortress makes her feel as though she isn’t alive. This then triggers a memory in Natsume. She starts remembering all those times her father told her about the real world. Essentially, they both dreamed of living on the surface one day. In other words, she can’t let her father’s dream die along with him. Finally, Natsume just wants to prove her doubters wrong. So yeah, all of these reasons pretty apply to humanity writ large. Kaburagi doesn’t want Natsume to die, so he tries to tell her that the struggle is futile. The conflict will go on forever, because it’s supposed to. He has already resigned himself to fate. But Natsume is the bug in the System, and part of being human is to struggle against one’s fate at all cost. Even if you achieve nothing, you will at least live the life that you wanted for yourself. So who knows? Maybe Kaburagi now needs to learn from Natsume and rage against the machines. Okay, okay, that was lame.

— Naturally, the episode ends right as the mission is about the begin. Kaburagi spots Natsume on the big screen, so I wonder if he’s gonna jump back into action to make sure that at least she survives. In any case, he should have expected her to go against his orders. She literally did it at the start of the episode.