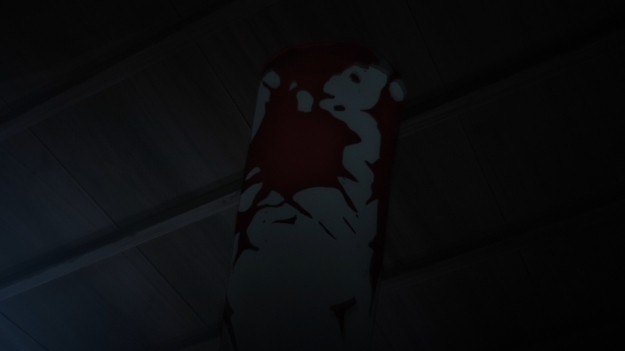 Ah, it’s that infamous cleaver again. Hell, for anime fans, the weapon’s almost iconic, isn’t it? Every time I come across a remake, my first thought is always, “Boy, I don’t remember a damn thing about this show anymore!” I might sound like a broken record, but it’s true. I watched the original anime adaptation over a decade ago, and it’s not like I ever went back for a rewatch. And what I mostly remember is… oh lord, the silly animation. The goddamn goofy-ass animation:

So this is one of the many areas that the remake can certain improve upon, right? Or does it even need to be improved upon? Isn’t the goofy animation part of the original adaptation’s charm? Gosh, I dunno… 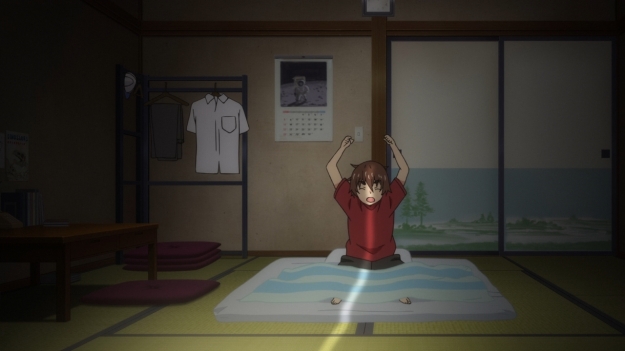 In any case, the animation quality in the remake is not looking too hot at the moment. 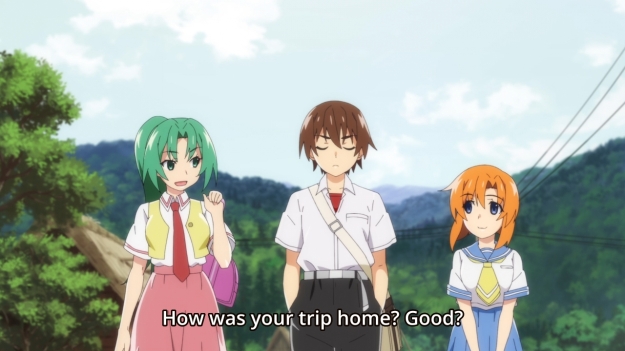 Maybe we can blame the pandemic, but I’m not too impressed with what I’m seeing right now. 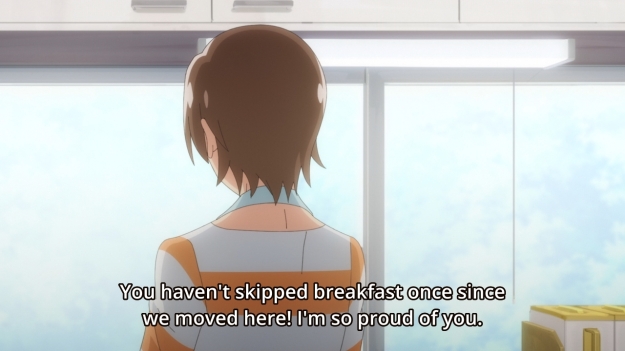 Is eating breakfast everyday something to be proud about? Anyways, maybe the remake can do a better job of telling the same story, but again, I’m not too optimistic. With mysteries like Higurashi, once you know the answer behind the mystery — once the story has been spoiled for you — most of the fun is gone. I don’t remember much from the original series, but I still remember what’s causing everyone to slowly go deranged.

I recently fell down the visual novel rabbit hole… not for too long, but long enough to play some of the big hits like the Muv-Luv series. I won’t recap my all of my visual novel experiences yet, but during my binge, I ended up buying the eight Higurashi chapters that are on Steam. Hey, they were on sale, and I had cash to burn. Unfortunately, I never actually got around to reading them. I certainly tried, though! If I look at my playtime for the first chapter, it currently sits at 86 min. And do you wanna know how far I got in the visual novel? Certainly not as far as this episode… I think. Maybe we’re at the same place. In any case, this is the problem I have with a lot of visual novels: the pacing is turrrrrrrible. 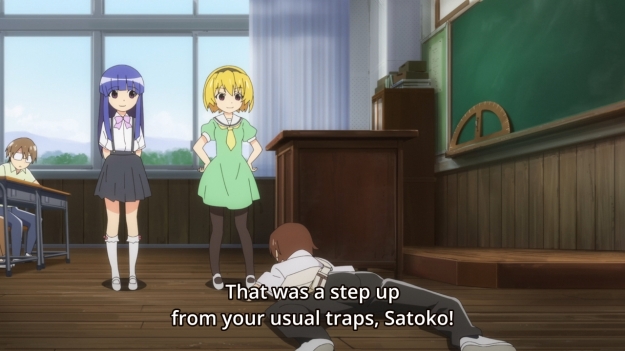 Yep, I recall reading about how Satoko likes to set traps for Keiichi. I also remember reading the part where he gets a tour of the village. 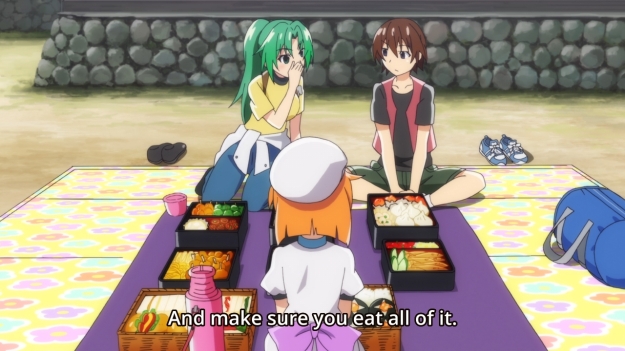 And of course, who could forget reading about their huge feast of a picnic? What anime girl can’t cook a meal for 20 in her spare time? Then afterwards, there’s a card game? I dunno, my memories start to get fuzzy there, but that’s my point. I hit all of those “plot points” and more in just 23 minutes of the anime. Meanwhile, my playtime for the visual novel is (again) 86 minutes. Everything is inflated in the visual novel. Something that takes only a couple of minutes to watch in the anime will take twice or even triple the time just to read in the original story.

People like to say, “Ugh, the adaptation cuts out so much material!” But I’m on the other side of the fence. Having seen the original anime adaptation, I already know what Higurashi is about. I already know that shit’s going to hit the fan… over… and over… and over. Nevertheless, I couldn’t push through the first chapter of the visual novel, because it’s just so slow. And this is the same with almost every visual novel out there! Do you really need to spend eight hours with Muv-Luv Extra in order to appreciate both Unlimited and Alternative? Ardent fans would say yes! And I agree that you need some context about Takeru and Sumika’s original relationship in order to fully take in emotional roller coaster ride that’s waiting for you in Alternative. But you’re never gonna convince me that eight painstaking hours full of slice-of-life is completely needed. And it’s the same way I feel here. There’s gotta be fat to trim. There’s just gotta be! But I suspect visual novel authors don’t really edit themselves that much… 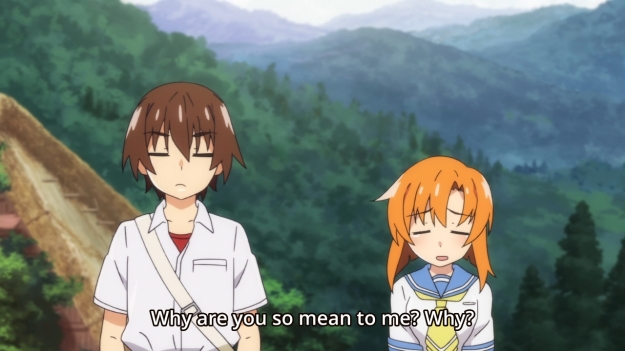 During my visual novel binge, I was also rather annoyed to see most of the male leads treat their friends like shit. Keiichi is just teasing Rena. He’s not as bad as some of his peers… like, say, Takeru in Muv-Luv or Ren in Dies Irae. Those dudes will straight up insult their friends, and I just don’t get the appeal. Nevertheless, we’re still playing off of the same trope in Higurashi, and boy am I tired of it. People write from experience or they just make shit up because they have no clue what real personal relationships are like. Either way, it feels bad, man. 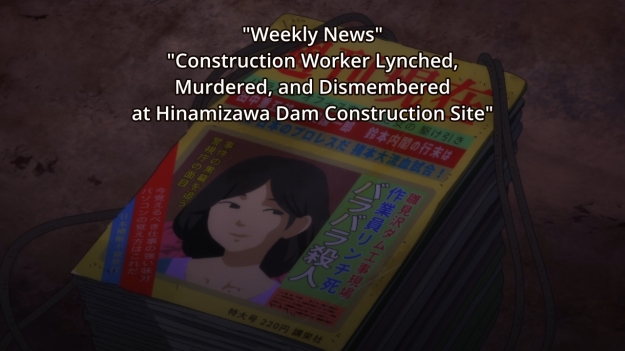 So in 23 minutes, there are only a handful of creepy scenes. Together, they might amount to maybe a minute or two of runtime. Some guy randomly tells Keiichi that something gruesome happened a long time ago. And when our hero tries to ask Rena about it, her entire personality turns dark for just a split second. Hoo boy, now that’s the gap moe to die for! Then right as the episode is about to come to an end, it looks like Rena might have a present for her dear friend. If I pretend for a second that I don’t know anything about what happens later — and to be fair, I’ve largely forgotten a lot of the story — is this enough to draw me in? Ehhhhhhh, probably not. Again, I can’t help but think back to my experience with Muv-Luv. If people hadn’t hyped up Alternative to hell and back — if I hadn’t already known that the series would turn into a battle for life and death against a mysterious alien life-form — I would have NEVER finished Extra. Never.

To be fair, Higurashi doesn’t play it so slow. Right from the first second, you see Keiichi hacking Rena to pieces. Obviously, shit’s gonna go down… but it’s still just a promise. And while you cling to that promise, you gotta watch silly, slapstick hijinks. That bugs me a bit. If you have the patience for it, cool. And in all honesty, I’ll probably keep blogging the series, because that’s what I do on this blog. I watch shows that bore me out of obligation until I get burned out and go on hiatus (coughcough). But if I weren’t blogging anime in general, I would really have to ask myself if the series truly deserves a second chance after this episode. There are just so many forms of entertainment out there to compete with.