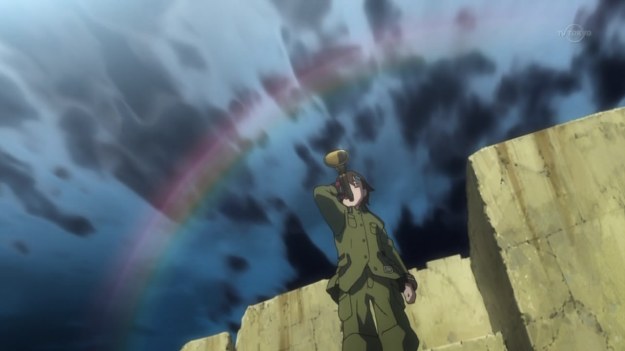 So much potential is being wasted with stupidity. I guess what you see above counts as character development… but it makes no sense.

How did she go from bad to good after just hearing a tiny advice?

What does that even mean? A bugle is a man-made instrument. It sounds like whatever man wants it to sound. Let’s entertain the notion, however. Was Kanata forcing the bugle to play in ways it didn’t want to play? Before this utterly random epiphany, Kanata had bad tone. I’m not a music expert, but I have played trombone and it sounded like Kanata’s bad tone was the result of her embouchure being too small or she’s not directing proper airflow. So somehow allowing the sound to “play itself,” solved all of her mechanical problems? Then what does this have to do with allowing the instrument to “play itself?”

I always thought Kanata’s musical development made no sense either. Most people start out by playing one note and one note perfectly. Then they move on to another note and practice that perfectly. They keep doing this until they have several notes in their reportoire. Finally, they put it all together — maybe even into a song. From the very start, we just see Kanata blaring away on her bugle without any sense to take it step by step, piece by piece. But somehow, allowing the sound to “play itself,” solved everything. Right, right.

I’m not sure the source of the advice made much sense either. The glassmaker claims that young people tend to make a similar mistake. He then starts blowing some glass. For whatever reason, the rest of the room pauses and stares slack-jawed as if they’ve never seen him do this before.

Maybe it’s just that exciting! The world of glassmaking is so damn exciting! Anyhow, he gets the desired shape, but then claims, “I’m not trying to make it this shape.” Uh, I think you did. Let’s hear the man out though: “The glass wants to be this shape.” W-what? It’s one of those things that sound all zen-like, but when you pause to think about it, it’s like… what? If he had wanted it to look different, he might have blown it differently. Somehow, however, he claims you just gotta let the glass do its thing.

I bet the makers of these were just like “Okay glass, I’m gonna blow and you do what you wanna do” and then the glass magically shitted out a klein bottle.

I think you made this dolphin thing, sir. Did you just, I dunno, stick a piece of glass over flame and the glass magically shaped itself into a dolphin? No, you did it. You shaped it. Maybe… maybe the glass wanted to be this shap-… no, no it didn’t and couldn’t have.

Yeah, you could blow on some glass and make a boring jar, but that doesn’t get us anywhere. You have to manipulate it. 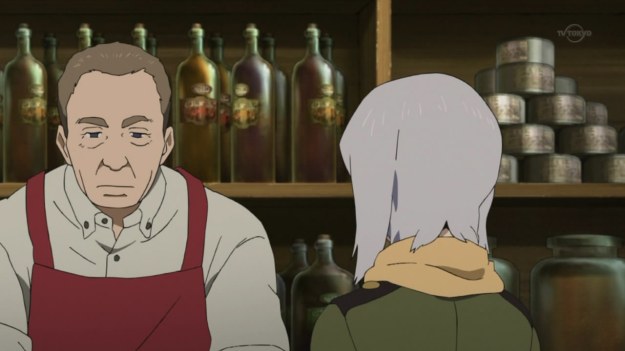 I’m sure you made those glass bottles behind the merchant too and I’m sure the glass didn’t just decide to become perfectly cylindrical bottles. You had to manipulate it.

Skilled workers are capable of shaping almost any vessel forms by rotating the pipe, swinging it and controlling the temperature of the piece while they blow. They can produce a great variety of glass objects, ranging from drinking cups to window glass. — Wikipedia

Hey, would you look at that? It sounds like those “skilled” assholes are not letting the bottles be all that the glass can be! HOORAH!

As for music, you shape the sound to your liking. There’s nothing wrong with forcing the sound to be whatever you’d like it to be as long as you get the sound you want. I know verbs like “force” are scary and mean, but it’s okay. It’s just sound; it doesn’t know any better. Or maybe the world of Sora no Woto are against mutes because they “force” the brass instrument to sound all weird. No trilling, no slurring, none of that stuff — you’re making the sound all weird!

Noel: Do you think a machine that killed a lot of people is scary?
Kanata: Yes. But I guess I’m more afraid of the people who used it than the machine itself. Because this trumpet… when I play it, it’s awful. But when Rio plays it, it’s so pretty. I’m sure a tank is the same kind of thing.

Oh great, the “guns don’t kill people; people kill people” argument. Okay, this should make us pause right here. Kanata just compared a tank to a trumpet. A trumpet can make good or bad music. There’s nothing a tank does that is beautiful.

Kanata: And a while ago, Rio played me a song from inside it. It can make such beautiful music!

Cool. Let me stick some flowers and Mozart on a hydrogen bomb. When it’s falling, it can play classical music! I’m sure it’s a good bomb!

Yui’s dumb, but she’s in high school and she just plays music. Kanata is dumb and she’s in a serious show. Somehow, that just makes it even worse.

This show has an interesting premise (soldiers and a city adapting to a post-war reality) and an interesting theme (redemption), but it fills the cast with utterly retarded people. I feel dumber watching this show. Thanks Sora no Woto.