What has our top misogynist been up to since I went on a short break?

Every episode has to start with a flashback. Every episode also has to have an OP. As a result, it’s about three minutes of crap to get to more crap. Anyway, Sasha starts off every episode by putting woman in their place:

I love how everyone hushes so that Sasha could mutter lame burns under his breath. It’s hilarious. This show is such a wet dream for social rejects. You know that kid that always kept to himself in the back of the classroom and probably smelled like rancid dog food? In his fantasy world, he’s this dude who sucks breasts and controls iron. And to be honest, this is what makes this show so ironically funny. It tries so hard, but it just ends up being so over-the-top. 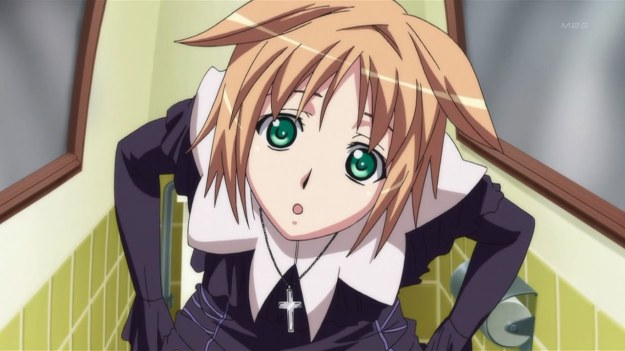 “When humans are excreting, they’re also at their lowest state of defense. You’re not wary enough, Teresa!”

Well, what is she supposed to do? Not shit?

So anyway, another villain shows up and his gimmick is chlorine. Oh I’m sorry, he’s the “Apostle of the Twelve Adepts, Gas Chamber. The Qwaser of Chlorine, Croa the Purifier.” Jesus Christ, man. Sasha can’t help insulting his classmates, but when it comes to his foes, he’s gotta stand there and politely spell out their entire identity. Being a shounen show, the fight between them plays out just the way you’d expect it to: a) Sasha is confident, b) but he can’t win alone, c) he receives unexpected help! d) he wins! e) Teresa strikes a pose?

There’s not much to say in the next episode. We just learn more about Ekaterina and how she’s not really evil… y’know, other than murdering people indiscriminately and making a sex slave out of Hana. Seeing Miyuri sacrifice herself for everyone, Kate screams, “I won’t let my dear sister take the shame all by herself!”

Happy music then plays…? Tomo is squeaking with joy and there are tears in Mafuya’s eyes and she’s all like “Kate….” Seriously? Yeah, uh, you go girl… don’t let your sister disgrace herself alone. Disgrace yourself with her. Whatever.

6 thoughts on “Catching Up: Qwaser”