Sort of a look at two series I just gradually stopped following. I just hope I don’t hop right in into the middle of a filler arc.

Aw, they changed the OP to Letter Bee.  I actually kind of liked the first one. WIth the new OP, you almost don’t get the feeling that this is an action-y shounen.  It’s mostly a syrupy sweet montage of people getting letters and being super happy. 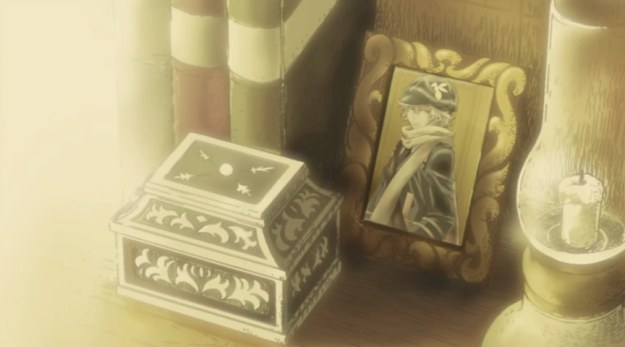 Last time I watched this show, there were questions like “what happened to Gauche” and “why is the world perpetually in twilight?” The anime still seems fixated on Gauche. Lag meets some broad-faced lady, Mana, who remembers Gauche fondly. Speaking of anime cliches, I hate it when a guy drinks or eats something made by a girl, says it’s delicious, and it just completely floors the girl. “Reaaaaally? My tea was good?” You’ve got taste buds, lady — why don’t you tell me if it’s good before using me as a guinea pig?

Anyhow, she somehow started a fire in the middle of the night and despite suffering no burns, she’s now blind? It’s pretty amazing. Her research journal got singed around the edges but stayed completely readable too. Her crazy colleague, Dr. Thunderland Jr. (which means there’s a Thunderland Sr.), decides that the first way to persuade Mana is by barging into her room and begging to dissect her.

If this all sounds really dull, I think I really jumped into a filler episode. Moving on….

The OP to Kimi ni Todoke hasn’t changed one bit and it doesn’t seem like much else has changed. The egregious use of floating stuff is still present.

At the moment, the drama seems fixated on Chizu and Ryu. It’s played for jokes, but Chizu going back to wearing jeans over a mini-skirt as a bad thing rubs me the wrong way. So is Yano and Sawako’s desire to see her sulk and cry as a way of dealing with her problems. There’s nothing wrong with crying, but it came off a bit odd to actually want someone to cry. Y’know, there’s nothing wrong with acting tough either because different people cope with problems in different ways. I guess the real question is… if Chizu was a boy, would they mind the tough act so much?

But I’ll give the show some slack. There’s some real pathos later. Kimi is so mundanely positive sometimes (from the first ten episodes that I did watch), it’s almost weird to see some bitterness and resentment when the characters talk to each other. We all know Ryu and Chizu won’t stay enemies forever, but hey, something other than happy-go-lucky sunshine is refreshing. On a related note, it might be trite, but an overwrought piano solo is almost always effective for these scenes.

Too bad the tone of the anime veers right back to corny quick, 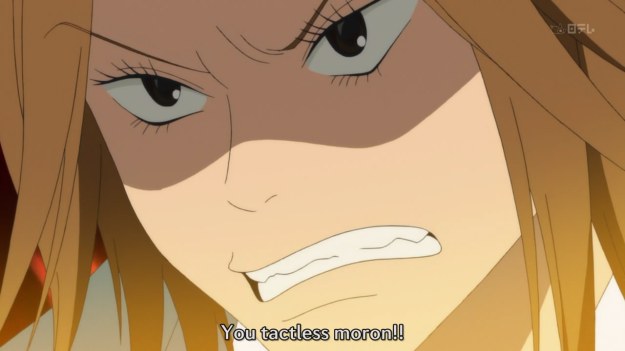 but it’s just the show’s nature.

In the end, Chizu’s friends got what they wanted: Chizu broke down.

Sparkly, floating shit appeared too. I’d be pissed if my friends were happy to see me pout.

8 thoughts on “Where are they now?”