Life is full of distractions. Between the World Cup, the NBA finals, finding a cheap apartment in San Francisco, summer classes and so on, I haven’t really bothered with blogging. To be honest anyway, while there are good shows this season, I’m not dying to watch any of them when things get hectic around me; after eight hours on campus and another hour on the goddamn 405, I just want to sleep. Shrug. Let’s get to the last anime I saw.

Maid-sama! is still rolling along and I think this is a mistake.

I wholly expected this show to have ended around the 12th or the 13th episode, but instead, we get a couple of boring, filler-ish episodes. The gimmick of the anime, i.e. the assertive student council president secretly works at a maid cafe, is just too one-dimensional. You really think things would be moving right along when Usui semi-confessed to Misaki like six or seven episodes ago, but the story chickens out and has Usui essentially say “Just kidding!” As a result, nothing has really changed between the two main characters; nothing has really changed in the world around them after thirteen damn episodes.

I said earlier that the show was a decent time-waster, but I assumed the show would have ended by now. Quite frankly, the freshness of the series has worn off and we’re just going through the motions. 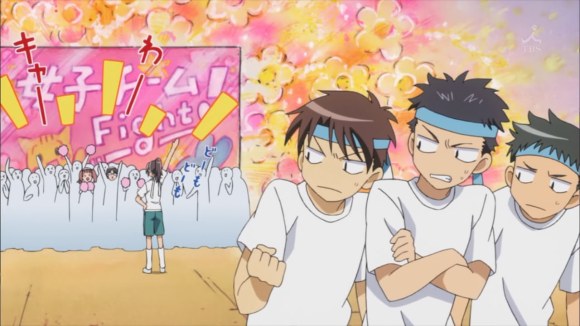 Who cares about some stupid sports festival?

Who cares about some side characters I’ve never found interesting? Don’t we just want to see what happens between Misaki and Usui? Maybe not anymore after the last few dull episodes.

Oh, this is such a waste of time. I’m just gonna go play TF2. The funniest thing all night was one of the worst (serious) attempts at a trap ever in anime:

For all of Maid-sama’s constant meta-references to anime conventions, I just find it amusing was that their trap was so obviously a guy in drag.

Let’s just watch the World Cup. Japan’s still in it and those were some sweet free kicks against Denmark.

I got to episode 8, and was wavering on whether or not to continue just for the sake of finishing it. You may have just spared me that fate, so thanks :)

I thought there already was a trap. -_-
And it was an annoying trap, too.

if that weren’t a trap she’d be cute.

Looks so obviously like a pathetic boy to me.

I laughed at this post when I read this. Japan is no longer in it.

Getting past group play is not too shabby.