Daikichi wonders whether or not he should make career sacrifices in order to raise Rin.

This episode deals somewhat with the double standards facing Japanese women in the workforce. They are expected to sacrifice their personal ambitions in order to properly raise a family, and pregnancy is often a death knell to any woman’s career. Daikichi wonders if he must also do the same for Rin’s sake. What this episode particularly excels at is offering a female perspective on how having a child can affect their lives:

After taking all of these perspectives to heart, Daikichi decides in the end that he will also have to cut back on his career in order to raise Rin properly. A female co-worker of Daikichi. She requested a demotion to spend more time with her young son.

On the one hand, Daikichi represents a progressive attitude that it’s not always a woman who has to make sacrifices when it comes to child rearing. Of course, there isn’t a mother to make sacrifices in the Daikichi+Rin family dynamic, but think about Kawachi’s underling’s reaction: “I don’t get this! …aren’t there nursery schools that’ll keep the kids ’til late at night?!” The cultural expectation here is that Daikichi continues to work hard for the sake of the company, and to compensate, Rin has to make the sacrifices. The burden of raising a child is usually shifted from one female to the next so long as the male can continue to pursue his dreams. Daikichi, by requesting a demotion of sorts (he wants a position with no overtime hours), universalizes the burden of parenting, i.e. it’s no longer gendered. Through his actions, he proclaims that males too can make sacrifices. Daikichi’s mother was deeply affected by her inability to return to work after her second pregnancy.

On the other hand, the episode portrays only passive acceptance from Japanese women. It appears to be a foregone conclusion that anyone who wants to raise a family will also have to accept that they can never make it far in their own career. The anime misses the opportunity to level direct criticism at a flawed system, e.g. the very fact that overtime is expected of any employee serious about his or her career. The anime even implies that it was Daikichi’s mother’s fault for getting too thin during her second pregnancy and that’s why her company no longer wanted her. Shouldn’t we instead enact laws to protect women during maternity leave?

I get that Usagi Drop doesn’t want to get too heavy or political, but how many other shows get the chance to deal with this very issue? I think Usagi Drop’s unique position also implies a greater level of responsibility. Rin remains shy around her relatives, but she no longer feels like an outcast.

• Daikichi’s mother and sister finally come around and accept Rin into the family, more or less. It took an astute comment from Daikichi that children are sensitive to how the adults act around them. The two women then relax and connect with Rin by essentially giving her a make-over. By wearing old clothes, there is no longer an age barrier between Rin and the women in Daikichi’s family. Metaphorically, she becomes one of them by assuming their guise.

African American women at the salon.

• Daikichi’s father, on the other hand, doesn’t seem to have much of a role in the anime. He seems to exhibit no change. Did he even disapprove of Rin in the first place?

• Daikichi is a bit of a Mary Sue (Larry Stu?) character. Aside from last week’s minor mishap (i.e. being late to pick up Rin), Daikichi is proving to be a really great and understanding surrogate father despite being so new at the game. Not only that, he’s apparently a great company man (“Last year, sales went through the roof because of you….”).

Rin follows Daikichi almost everywhere — even to the restroom.

• Again, Rin’s role in the anime strikes me as secondary. She just seems like a really smart pet that can talk. I just feel as though she could get more involved in the story. At the moment, it’s really all about Daikichi and this episode doesn’t seem to be any different. I think a large problem with Rin’s portrayal is that we rarely see her without Daikichi. When she is on her own, she doesn’t have much to say (e.g. the scenes of her in kindergarten).

• We learn this week that Rin’s father had a maid who curiously had the same name as Rin’s mother — I guess Rin never got to know her mother? To compound matters, Rin doesn’t have fond memories of the maid. 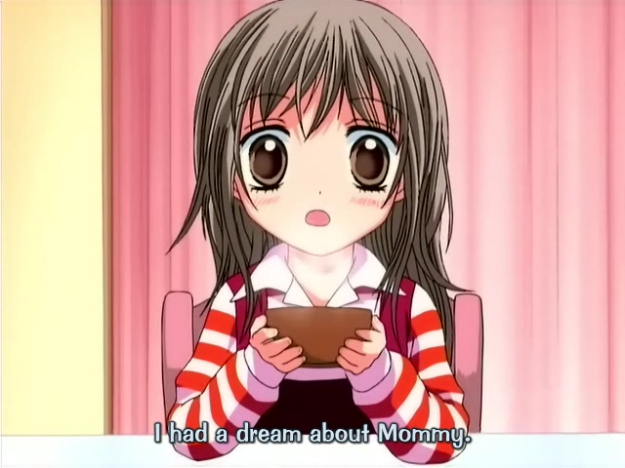 In comparison, Yuzuyu of Aishiteruze Baby has very fond memories of her mother. In fact, she misses her mother terribly at times throughout Aishiteruze Baby. Only time will tell if Rin’s fear of her own mother carries any greater significance.

• Why did Daikichi put on a bandana as he was going through his grandfather’s place?

I was half-expecting someone to walk by and mistake Daikicihi for a burglar.

• They say chronic bed-wetting is one of the recurring themes in a serial killer’s youth. Just food for thought….