Hilarious. Just when it’s beginning to look as though the anime might actually become interesting, IT. ENDS. All those silly side characters from previous episodes finally get to meet each other for the very first time and then the series is over. Well, what a tease.

In reality, Dantalian no Shoka should have started its story here and made OVAs out of the first eleven episodes. Many stories begin in media res anyway, and we hardly needed Dalian’s “origin story.” Besides, what did we really get out of the first eleven episodes? Nearly five hours of nothing but poor animation, rushed storytelling and a tsuntsun character that would make Rie Kugimiya’s characters blush. To balance out Dalian’s completely petulant attitude, the finale has five total minutes of her acting deredere. Before you suggest that there’s a little too much of the former and oh-so-little of the latter, this is just anime’s tried-and-tested golden tsun-to-dere ratio. Anything different would’ve thrown the world into karmic imbalance. Up would be up, down would be down, and imagine… a world where girls acted like normal people and not the infantilized objects of manchildren’s dreams. Pfft, the thought of this just makes me sick.

Out of nowhere… zombies!
So some dastardly villain is attempting to use the power of Phantom Books to turn people into zombies. Apparently, you don’t even have to use a book to get the job done. According to Dalian, any “properly” written text can have the power of a Phantom Book. Well, why not just call it Phantom Text then? In any case, as soon as our heroes realize that everything’s going down in London, the anime immediately cuts to Hugh and Dalian standing in the exact factory where the newspapers are being printed. How did they find the place? How did they get in? Was the door unlocked? Oh, that’s just our lovable Dantalian no Shoka! Always jumping from scene to scene with inadequate internal logic! I’ve even been told that the show’s avant garde and daring.

–
Oh well. Our heroes finally meet up with Raziel, the red biblioprincess with a keyhole in her eye, and some Professor (Moriarty?). If you were hoping for a scintillating showdown between the two pairs of keykeepers and their respective loli libraries, don’t hold your breath. I’m not exactly certain what the villain’s motives are. He wants to stop the Treaty of Versailles? Well, what’s so bad about that? That junk only led to more conflict in Europe anyway. Even more puzzling, the villain just ups and shoots Hugh. Even for Dantalian no Shoka, the anime is moving far too fast.

Escape from the crumbling with the princess!
But the conflict above is just pointless background noise anyway, because the entire series’ real story has always been about Hugh rescuing the girl within Dalian’s library (“Dear Penthouse, this may sound strange but….”). Please, hikikomori princess, don’t lock yourself away forever! I’m just amazed that there are so many anime recently about pretty girls being complete social outcasts. Anyway, Hugh tries to lead her out of some collapsing library dream space (don’t ask me to explain) only for a minotaur to stand in their way. Apparently, it’s the library’s warden, but why does a library even have a warden? So Hugh has to convince shut-in girl to quit being a shut-in, and he enlists the help of Dalian, who, in a brief moment of gratitude, admits that she’s had fun with Hugh. This magically saves Hugh from dying. What? It just does.

But like I’ve said from the very start, why is this even the main focus of Dantalian no Shoka. We have three pairs of biblioprincesses and their keykeepers, all with different goals in mind. We have a potential conflict set against the backdrop of the impending Second World War. Generic tsunderekkos notwithstanding, these all seem like ingredients for an adventurous, thrilling anime series with some sprinkling of political intrigue here or there. Instead, the series kinda… sorta… not really… focused on Hugh and Dalian and only them. Even then, the episodes didn’t develop their relationship all that much. Dalian’s a spoiled brat who likes buns and Hugh treats her fittingly like a child. Fascinating. 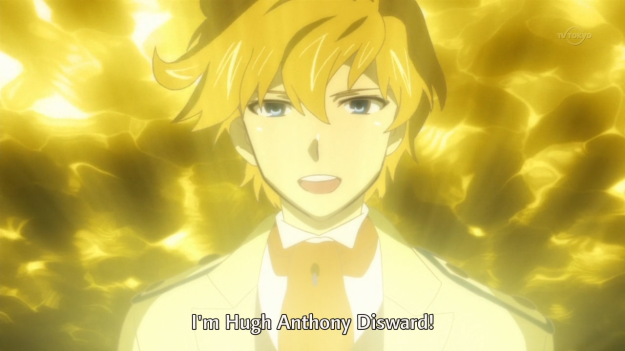 Well, the ending is kinda sad; I can no longer misread the main character’s name as “Huge Dickwad.” Real mature, I know.

Commenters have repeatedly insisted throughout the season that Dantalian no Shoka‘s premise has real potential, but it’s just being squandered by Gainax’s obviously blase attitude toward the adaptation. I don’t know how you guys could have discerned this from the first eleven, mostly-boring-as-all-hell episodes, but I guess there is a shining needle somewhere in this haphazard haystack you call a finale. But that’s just it — it’s the finale and that’s all she wrote. Good night, sweet biblioprincess. May Gainax return to making worthwhile anime again.