Ah, I can already hear it now. All across the blogs and forums, a whole bunch of people will cry over the fact that Sora has disappeared from Shiro’s life. Nah, it’s not because they are actually sad to see him go. Having said that, a lot of anime fans seem to love Sora’s personality for some reason, but I digress. Rather, people are sad because Shiro’s sad. And even though Shiro’s just another blatant wish-fulfillment character for otakus everywhere — a diminutive imouto who will never leave my side and is just as into nerd interests as I am?! — with hardly any personality, anything sad that happens to her is just the worst thing ever. The same sort of thing happened when Steins;Gate‘s Mayuri died over and over. To me, it was just another one-dimensional moe character biting the dust. Good riddance, right? But people pissed and moaned about how utterly tragic it was. Well, Shiro doesn’t even die here. She simply loses her brother. But uguu, it really tears me up that her nii-san is gone!

Still, removing Sora from the ED was… an okay touch on Madhouse’s part. I mean, that’s really all the praise I can give since it was also kind of expected. After all, this isn’t the first time an anime has messed with an ED. It’s been done countless of times before. Hell, the most recent example was in Kill la Kill, so you’ll pardon me if I’m not blown away by Madhouse’s latest trick. I bet people find the tweaked ED creepy and disturbing though. Don’t ask me how, but I bet you they do.That’s just how it is nowadays. Add some random static and voila! Creepypasta! It’s like all those crappy horror stories about video games on 4chan. Have you heard the famous one about a kid playing Majora’s Mask and how the cartridge was supposedly haunted? This guy even created all these boring Youtube videos of him playing his haunted copy, but all it really amounted to was a bunch of cheap hacks to make the gameplay seem a touch off-kilter. But that’s the thing. Nowadays, it seems all you simply have to do to scare anyone is to take something that they cherish — preferably something with nostalgic value — and make it seem “off.” That’s it. Enjoy your creepypasta.

But anyway, I guess should discuss the story. So what happened to Sora anyway? It doesn’t really seem like a big mystery to me. Obviously, the way he was talking to someone right before he disappeared kinda implied that he was already in the middle of some game. I’m 99% sure he hasn’t started a game against the Warbeasts yet. It wouldn’t make sense for any of the other races to randomly challenge him either. The only remaining candidate — and it’s an obvious candidate too since she even shows up in the episode itself — is Kurami. Who else could it be? And please, don’t do the whole “Sora never existed! He was only in Shiro’s head!” bullshit. Every single time a fan comes up with some pathetic theory about their favorite cartoons, it’s either always “It’s just a dream!” or “It’s in his/her head!” This ain’t Fight Club and Sora ain’t Tyler Durden. We’ve already played a game where things can be conjured up or erased at a whim (see: the shiritori episode). I’ve no clue what Sora is playing with this mystery opponent — I still it’s obviously Kurami, by the way — but it’s hardly a stretch of the imagination to suggest that perhaps the characters’ memories are somehow on the line.

No doubt, however, that Shiro will spend a good portion of the next episode shivering and cowering without her brother’s presence. Maybe we’ll even get some “heart-wrenching” flashbacks to explore Shiro’s attachment to her brother. So the next episode will be fun… not really. But she’ll figure it out. Sora’s little speech to her at the end of this week’s episode makes it a little too obvious: “Shiro, we always win a game before we start.” Ergo, she doesn’t even have to know that she’ll be playing a game in next week’s episode. It’s a given that she’ll win. He totally believes in her! Shiro’s just so smart, after all. Not only that, he probably has it all laid out for her to win as well, because Sora is just that many steps ahead of his opponents. It’s not like the siblings can ever lose anyway. People will contend, of course, that this anime isn’t about whether or not the Sora and Shiro will win, but how they win. Sure, I guess, if their solutions were actually clever. But other than the Coulomb’s Law trick — this is after we put aside the whole unsavory business surrounding the whole lithosphere debate — the story has definitely been a miss on this front.

Anyway, the rest of the episode — the parts that dealt with the Warbeasts, that is — was pretty unremarkable. The Eastern Federation apparently has a high enough level of technology to have things like TVs, video games, and elevators. Good for them, I guess. They’re also an island nation with limited resources. Oh yeah, I recall from an earlier episode that they had a lot of tribal conflicts amongst themselves? I might be wrong on the last point, but if I’m not, gosh, this Eastern Federation sure does sound familiar. Regardless, if and when our siblings do finally play a game against a representative of this Eastern Federation, you can rest assured that it will be a cute, little girl. When has Sora ever not battled a cute, little girl? In fact, it’s probably going to be a slew of cute, little girls from here on out until our siblings finally make it to the top to challenge Tet himself. Just to spite me, Tet will sex-change or something, but we will just have to wait and see!

Uh, let’s see… what else to cover…? Oh right, Sora bets a lot of things this week, and this includes Stephanie’s panties because it’s just so funny. Nevertheless, he also ends up putting his kingdom’s Race Piece on the line, and according to Fi, such a thing has never been done! After all, if you lose, you also lose your rights as an Exceed. This means the ten pledges won’t apply to you or something. People are trying to be too clever for their own good, so they try to reason that perhaps this is a good thing for Imanity. But last I checked, Imanity has nothing special going for it in terms of combat prowess. They are not particularly strong, not particularly smart, nor do they have magic at their fingertips. So yeah, without the ten pledges, the other fifteen races would probably just smash Imanity into the ground… if they cared. At the end of the day, however, Imanity is still the 16th ranked race, so it’d be a waste of time and effort any way you slice it. But regardless, this talk is all pointless, because we know the siblings can’t lose. That won’t stop Stephanie from going through her weekly mood swings, though. 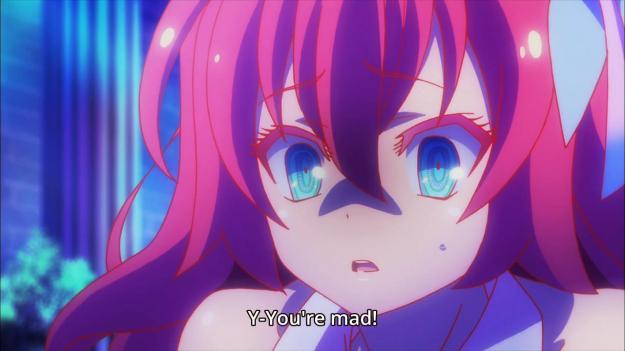 Stephanie: “I knew it! It was wrong to entrust these people with my grandfather’s hopes!”

6 thoughts on “No Game, No Life Ep. 8: Sora disappears like a fart in the wind”