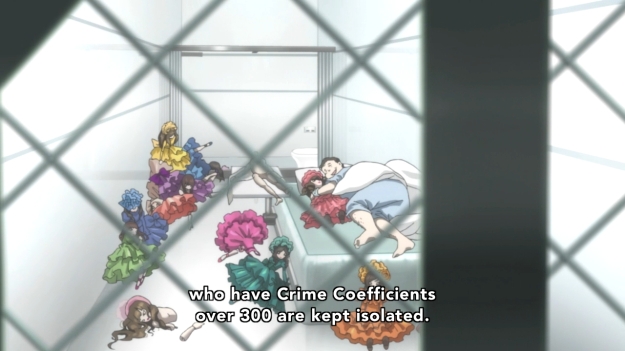 Honestly, I doubt the rankings for the top four shows will ever change. Most of the movement will naturally occur at the bottom of the barrel, because one of the many things a good show gets right is its consistency.

After thinking about it carefully, i.e. less than a minute, I decided I have no reason to care how either of these shows turns out.

Still the worst anime I’m watching this season. The worst part is that the show’s not even a trainwreck. An actual trainwreck can be admired and studied for where it all went wrong. Rokujyoma no Shinryakusha!?, on the other hand, is like the anime equivalent of gruel.

It’s bad, but at least it’s a trainwreck.

For endangering his imouto, Tatsuya takes his rage out on the Chinese gangsters in just about the most boring way possible: vaporizing them and their underlings from a mile away. Michael Bay was hired to add excitement to Mahouka, but he swiftly resigned after spending just an hour on the project: “I just can’t. Every time I try to add explosions and jive-talking robots to the story, my contributions instantly vanish into thin air. It’s inexplicable!” At the moment, researchers are busy investigating Mahouka‘s bizarre ability to repel any sort of excitement that comes near it. 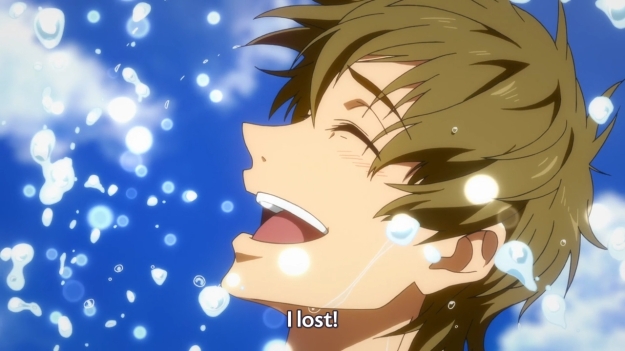 Everyone swims in the qualifiers. Some people make it, some people don’t. All of the main characters qualify, though. As if they wouldn’t. Exciting swimming footage. Exciting “reach your hand out at the last second and touch the wall” footage. Other than that, not much to chew on.

Hey, remember those Ark Faction guys from the first four or five episodes of the series? Well, let’s dig up their dessicated corpses, because we need to buy some time until the grand finale! If you could also spin your wheels and strand yourself in the middle of an Australian desert, that’d be great.

Standard episode where the tsunderekko oscillates between tsuntsun and deredere. Mostly tsuntsun. She also finds herself in various states of undress. Add all of this up, and you have yourself the best train anime ever.

Boring set-up episode. The show finally introduces us to the much hyped-up Esdeath, but she’s just another sadistic, overpowered lunatic. But hey, she’s got big breasts, she wear heels, and people tell me she’ll fall in love with our bland-as-fuck hero. Instant hit character!

Take everything you know about MMOs and online games, then throw all of it out the window. Next, have the cute girl undress herself in front of the guy, then slap him. Bam. Instant anime hit.

Oh my god, there’s actual plot progression for once. I’m so proud of you, M3! You finally decided to move the story forward! I mean, it’s still nonsensical, but at least we’re getting somewhere! 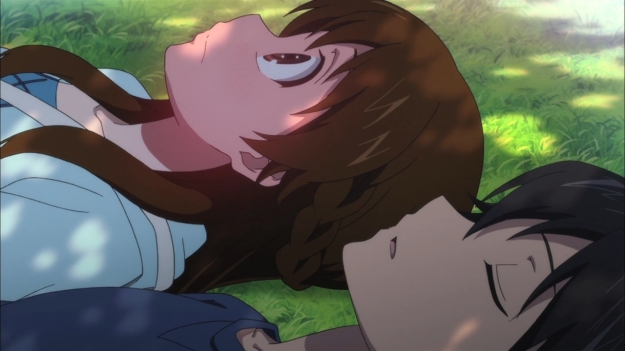 So… so boring. Holy crap, other than the pointless “I can see into the future!” nonsense, which the anime has barely utilized, Glasslip is the literal definition of slice-of-life. And fine, fine, our lives aren’t always interesting and exciting, so bravo, Glasslip. Brav-fucking-vo on imitating just how unexciting and uninteresting our lives really are. You really nailed it! Seriously, though, there isn’t a show out there about my life. There isn’t a show out there about your life either. In fact, we’re sitting here, watching these shows precisely because our lives are relatively mundane compared to the fiction we consume. So why — oh why, why, why — would I want to go and watch someone else’s relatively mundane life? I don’t get it. I just do not get it. I literally just watched a girl go over to a guy’s house, meet his dad, sit down to eat some pasta, then go out to a nice, serene meadow in the woods. She proceeds to lie down next to him until a finger of hers — a damn finger — grazes one of his fingers (GAAAASSSP!), so she blushes and excuses herself. Why did she even come over in the first place? ‘Cause she had something to tell him. But she didn’t. In the end, she runs off before she could tell him anything important. In fact, the only thing she manages to say the entire episode is, “EHHHHHHHHHHHH? EHHHHHHHHHHHHHH? EHHHHHHHHHH?!” 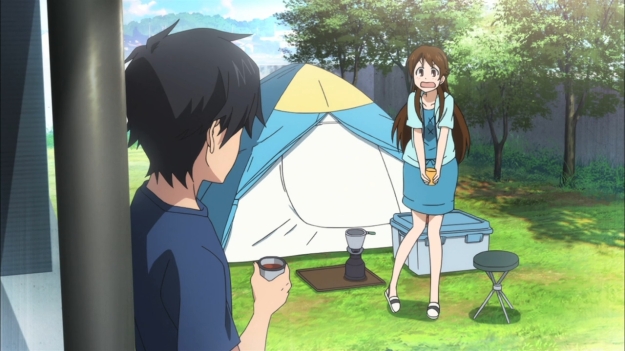 Anyway, Sachi’s going back to the hospital, and Yana finally confesses her feelings to Yuki. I hope a train really runs one of these characters over like it has been foreshadowed.

You dense idiot. Tokimune even asks this question loud enough for the entire base to hear it. Basically, Tokimune’s sister died for unknown reasons. Well, her death was officially ruled an accident, but our hero doesn’t accept it. As a result, he intends to climb through the military ranks until he’s an influential enough figure to demand some answers. Not only that, he hopes to use the fancy Argevollen to aid him in his cause. Jamie thinks this is idiotic, because he’s just recklessly risking his life. So she gets frustrated with him, and neglects to eat a single meal. Everyone loves overreacting in this anime, so a bunch of people tell Tokimune to consider the girl’s feelings. Since Tokimune’s as dense as a rock, he mistakes her feelings of frustration for feelings of actual love. After five episodes, bro? Really? You think the girl is already in love with you? Oh, I’m sure she’ll develop feelings for him later, because we can’t help but shoehorn in a crappy love story into everything, even an anime about war. But I mean, even if she was truly in love with him, why would you ask her that question in front of everyone? Whatever happened to discretion? Other than this, however, the episode was — like every other episode we’ve seen thus far — a complete bore. Still, here’s the best part of the whole episode:

It’s the excitement in his “Arigatou gozaimasu~!” that really gets me. 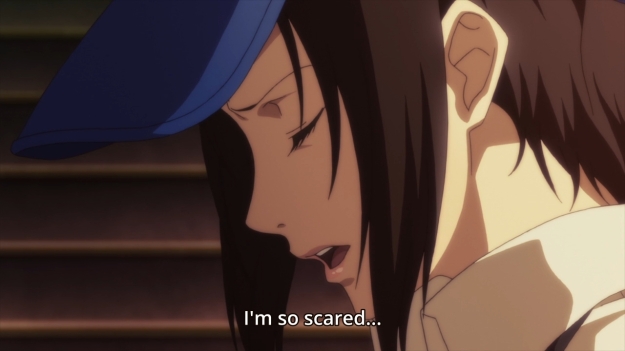 Marie still has her amnesia, but gives up on trying to recover her memories because she finds it painful. The rest of the gang then set up an elaborate quiz show just to show her that memories are super special, yo. Anyway, this may as well be Marie’s Life Story – The Animation. Yeah, I realize her story’s the only major addition to the PS Vita remake, but I just don’t care about her or her amnesia. I mean, let’s face it, none of these characters’ stories are strong enough to carry the entire story by themselves. What makes the Persona games unique is that they’re each a collection of stories that somehow ties into a bigger tale about saving humanity from utter extinction at the hands of these crazy deities. Furthermore, these stories are fine in small doses, i.e. perfect complements to the big picture. On their own, however, they’re really nothing special. Truly, truly nothing special. Marie’s dilemma is no exception. As a part of a long series, sure, I wouldn’t mind seeing a few episodes about her and her issues. When the entire series is all about her, though, just kill me, please.

Got some flak for my post this week, but what can I say? I think it is absolutely nonsensical that anyone can entertain the notion of entering into a relationship with Kou. Dude needs therapy, but in the magical world of anime, the shoujo heroine will ganbatte it up and fix him one episode at a time. Hell, who even needs trained professionals anymore! Just find your “soul mate,” and make her do all the dirty work! In the meantime, he can insult her and her friends, but it’s okay! People, people, he’s willing to stay with her at the train station until her mom arrives to pick her up. He’s willing to put himself out there and watch over the girl in one of the safest metropolitan cities in the world. This totally makes up for everything he’s said and done.

Yes… how dare you make yourself cry? Anyway, the good guys continue to suffer more and more side effects. In fact, it feels like they are really up against it this season. In Hamatora‘s first go-around, everyone had fun solving cases and beating the bad guys up, In the sequel, however, things just keep getting worse and worse for our heroes. Three is roiding out and running away from Honey. Even Nice and Murasaki can’t confront Art like they would want to, allowing Art to escape with the Freenium members. This is just the fifth episode, too. I wonder how much further these guys’ powers will continue to decline as Art builds his army of freedom-seeking Minimum Holders. In the end, Gasquet bites the dust, but… well, to be honest, I thought he died last season when Moral assumed his identity in one of the episodes. Ah well, that just shows you how closely I’m paying attention to this story.

This is the most neutral anime this season has to offer. It’s not good, but it’s not bad. It’s just there. As a result, Tokyo ESP acts as the perfect buffer between the overall good and the overall bad anime of the season. 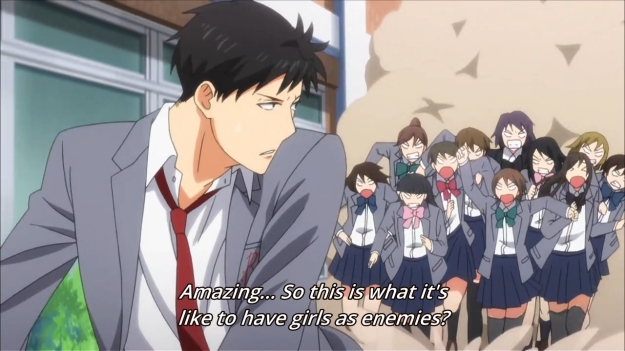 It would be great if the more Chiyo learns of Umetaro’s bizarre personality quirks and oddities, the less she romanticizes him like a stereotypical shoujo. Even better, what if she learns to move on with her life? I doubt any of this will ever happen, though. Too bad.

The anime is starting to disappoint me in its execution. Luckily, the action is still well-choreographed, and the political machinations are still intriguing if hastily developed (the emperor flip-flopped hard). It’s just a pity that after five whole episodes the characters, i.e., the primary drivers of the plot, are still flat and two-dimensional, especially Inaho.

Just for fun, let’s do a quick poll:

27 thoughts on “Everything Else, Summer ’14, Week 5: Making the much-needed cuts”