— So is something finally going to happen in this anime or what? Nah, it’s just a crow familiar stalking our Gary Stu and his equally Mary Sue-ish imouto.

— When some upbeat soundtrack started to play, I really thought we’d be treated to a high-speed chase scene, except, y’know, with a bird. But nah, we don’t even get that. Tatsuya quickly arrives at his laboratory, which is coincidentally being hacked by the the Chinese badmen at the same time.

— By the way, Tatsuya then takes one look towards the sky and vaporizes the crow tracer with his mind. Magic. And all this over a stupid relic.

— Elsewhere, the Chinese badmen intend to send people to eliminate “that little girl.” I assume they’re referring to Chiaki, ’cause we then see a scene where Tatsuya tells Chiaki’s sister that they will sweep all of her crimes under the carpet. Yeah, after what looked like a potentially exciting start, the episode is back to being a giant borefest. 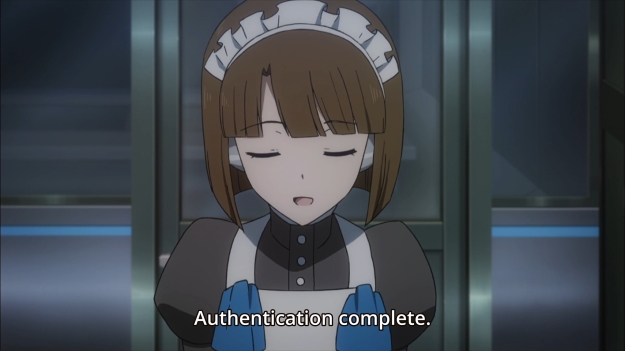 — The next day, Tatsuya goes to debug some stuff at the Robot Research Club. What stuff? It’s a robot maid named Pixie. In a better world, our Gary Stu would find a kindred spirit in this robot maid and fall in love with her. At least this would be funny.

— Tatsuya: “Maybe I pushed myself too hard.” Haha, sure. And sure enough, he only feels tired because the room has been filled with sleeping gas! The robot maid quickly brings him a gas mask, but he tells her he has no need for it! This Gary Stu laughs at sleeping gas! You can pass whatever gas you want, it won’t faze Tatsuya!

— Tatsuya then pretends to be knocked out by the sleeping gas so that the culprit will reveal himself. It is none other than Isao!

— Who’s that, you ask? It’s just some guy we met in last week’s episode, but I don’t think you care because I don’t care. Just think of it as yet another beta male who loses to Tatsuya. Here’s his ugly mug trying to defend himself from Chiyoda.

— Chiyoda: “Calling out your enemy’s name… how pointless.” That’s true. If only the anime was more self-aware, because she then goes on to say, “You try too hard to be cool, Sekimoto.”

— For some reason, the anime cuts to Mari and her boyfriend Shu (short for Naotsugu) at some detention center. The guy simply says that he wanted to be with her. Mari’s response: “You don’t have to come out and say such an embarrassing thing…” Man, everyone in this show is so repressed. You can’t even tell your own girlfriend that you want to be with her. No doubt people will just defend this nonsense as innocence, purity, or some other patronizing nonsense. When being honest with your own damn feelings is looked down upon — except for when it’s between siblings — you’ve really jumped the shark.

— Lu Gonghu, one of the Chinese badmen, has infiltrated the detention center, because he’s on a mission to kill Chiaki. Zhou What’s-his-face sees this, however, so he hits a riot alarm which sends Shu jumping up the stairs like some banshee. When they see each other, they utter each other’s full names and nicknames. Who does this?

— Ooh… ooooh! A fight scene’s about to break out! Holy shit, an actual action scene in Mahouka? You’ve got to be joking me!

— Yeah, it’s a bait-and-switch. While the two men do fight, what we see instead of Shu swinging a short dagger that Lu Gonghu nevertheless feels the need to block like so: 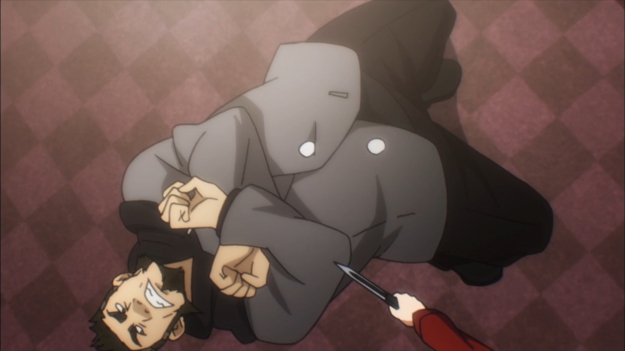 Obviously, there’s magic involved, but if I can’t see said magic, it’s not very impressive, now is it? Eventually, Mari joins the battle, which forces the Chinese badman to retreat. Needless to say, the animation is shit.

— Afterwards, Lu Gonghu receives a new set of orders: forget Chiaki! Go after Isao instead! B-but if you were repelled the first time, what makes you think you will succeed this time? In fact, these Chinese badmen seem pretty goddamn dumb to me. They keep asking hapless high schoolers to do the job, then when said high schoolers naturally fail at being top-notch spies, the Chinese badmen must kill the the high schoolers. And of course, the assassination attempt is yet another risky thing to worry about. It just sounds to me like such a stupid, stupid plan.

— Yo, why don’t you actually send one of your actual spies — y’know, people who have actually been trained to do this sort of espionage bullshit — to do the spying? It’s like you want to fail, because you and your entire Great Asian Alliance have been written by a hack.

— Sure enough, Tatsuya and Mari intend to pay Isao a visit in the near future. Obviously, we can’t just see another character (Shu) be a badass and be done with it. Now we gotta watch the Gary Stu in action. Still, we had some false tension in which Chiyoda initially refuses to allow Tatsuya to see Isao. Why? Cause trouble follows the Gary Stu, and she just won’t have it! Pfft, as if anyone could ever refuse the Gary Stu. All in all, a pointless display of impotent anger on the girl’s part.

— What the hell is wrong with her head? But yeah, Zhou has come to erase the girl’s memories of him.

— We then see Mari use the same “scent-based mind control” technique on Isao in order to interrogate him. There’s nothing too juicy here. He’s just looking for information on the Relic with a capital ‘R.’

— But then the alarm sounds! Lu Gonghu is here!

— Man, this assassin doesn’t even try to be sneaky or anything. He just fucking walks his ass right down the hallway at a slow pace. I like how he looks all burly and shit too, but he’s as dumb as a rock.

— It’s hilarious. The Gary Stu has proven himself to be positively overpowered all season long, but Mari wants him to stay back and guard Mayumi. Oh well, if you’re going to be stubborn about this…

— First, Mayumi pelts the guy with ice shards. Oooh, scary. Then, Mari tries to whip him to death. Lu Gonghu simply pulls himself back, then runs around Mari. Gee gee.

— But now it’s the Gary Stu’s time to shine. The guy literally stands there and stares at Lu Gonghu. That is enough for this… this miasma thing to appear. And just like that, Lu Gonghu is heavily injured. Are you fucking kidding me? Everyone else has to physically exert themselves, but Tatsuya merely stares at someone and defeats them.

— But that’s the thing. Even if you enjoy watching an overpowered character, it’s not even being done in an interesting way. He’s just looking at people. He looks at them and they lose. Overpowered can mean a lot of things. Overpowered can be fun to watch if it’s visually or hell even thematically interesting. But it’s fucking boring as shit when the guy just stares at his enemies and they collapse to the floor. What is this? How can this be enjoyable? Would it kill you to make the Gary Stu break a sweat?

— The two girls then easily take down the now-weakened Lu Gonghu. So essentially, Tatsuya did all the hard work. If looks could kill…

— Afterwards, Tatsuya is informed that the entire mobile espionage unit has been taken into custody. It was that simple. For what it’s worth, Chen Xiangshen did get away for the time being. But this arc has been so shit. Who knew Chinese badmen infiltrating the country would amount to be a bunch of half-assed spying from a bunch of high schoolers, and then a single look defeating the so-called Man-Eating Tiger. This is somehow the worst arc yet.

— In fact, every single arc has been worse than the previous one. I remember how people were like, “We Mahouka fans agree that the first arc is the worst arc. It gets better!” Naw, man, naw… it’s worse than ever. The first arc was at least short and funny in its random conservative bullshit. On the other hand, the second arc dragged on forever and ever as we watched one girl after the other compete in the lamest fucking contests I have ever seen. Mirage Bat? Seriously? Are you fucking kidding me? A bunch of girls leaping up into the air to bat at some pretty lights? Then now, you tell me that evil men from China are here to fuck shit up, and then nothing happens! And shit, the Crimson Prince put up a better fight than Mr. Lu Gonghu. How do I feel right about now?

— You’re still here? You still want to know what happens at the end of this week’s episode? Guys, it’s just Miyuki being a creepy imouto again. Yeah, nobody gives a fuck. Y’all ain’t missing nothing. Go on, get on outta here. There’s a whole world out there! There ain’t nothing left here for you to see!

18 thoughts on “Mahouka Koukou no Rettousei Ep. 22: Wherein a bunch of high schoolers pick on a foreigner”