Well, you guys, it’s been a long time coming. But we’ve finally made it to end. It’s… it’s almost enough to make a grown man cry. What will we ever do without the Gary Stu! As you can see from the picture above, he is a living god. What will we do without his blessing?!

— Yeah, I’d be frightened too if I saw these weirdos approaching me from the sky.

— At first, it seems as though the evil foreigners are winning this small skirmish. But wait, what’s that! Oh, it’s the invincible Gary Stu. False alarm, you guys.

— The Gary Stu then proceeds to bring people back to life. The bad guys keep shooting the good guys down, but Tatsuya is so overpowered, he just keeps bringing his allies back to life just so they can get shot down again. Awesome plan, you guys.

— C’mon, if Tatsuya really wanted to, I’m sure he could kill all of the bad guys with a single fart, then revive his allies. Wouldn’t that make more sense?

Where does the blood on the ground go? Where does the bullet in the person’s body go? Why is this show so unmitigatedly bullshit? This is where some Mahouka apologist proceeds to write a 10-page treatise on how Tatsuya’s powers make perfect sense.

— Someone even utters the name Mahesvara as the camera zooms in close to Tatsuya’s face. Who cares? Who fucking cares? This doesn’t change anything. We already knew Tatsuya was a Gary Stu. Oh, so now he’s a religious Gary Stu? Big deal. It’s still a shit story, and he’s still a shit character.

— I don’t care what Tatsuya is supposed to represent if it’s not done in an interesting way. Even when they made movies about Jesus, the movies were only interesting when Jesus started out as a flawed and nuanced character with human struggles because — gasp! — it’s like we’re humans and shit!

— Even deities had an evil counterpart that gave them trouble. Mahouka can’t even be assed to give us that. We just have these faceless Chinese badmen, and they’re nothing more than ants beneath Tatsuya’s soles. Too bad he ain’t got any soul. 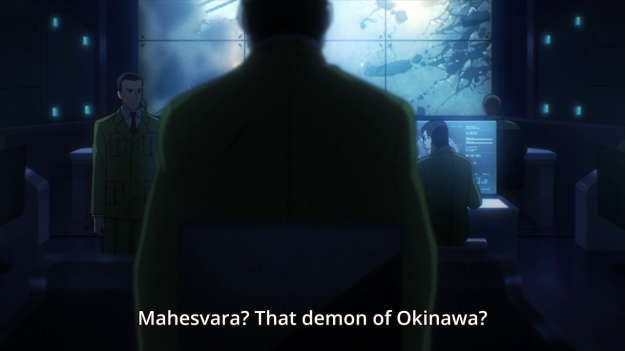 — Even the bad guys are now sucking his dick. How do you identify with this shit? Does your life suck that bad that you need Mahouka to be your form of escapism? Are you that powerless that you need to imagine yourself as walking, talking, flying God?

— What have we come to? This is the final episode of Mahouka, and I don’t even feel as though the good guys are in danger. Hell, they’re not even slightly perturbed. Even Sword Art Online, an amateurish piece of shit in its own right, had enough storytelling chops to put a damsel in distress, thereby creating tension. Kirito still dicked around for an entire arc before saving his e-waifu, but at least he had a real mission that he could fail! Mahouka, on the other hand, is like a five-year-old’s fantasy. There’s no danger whatsoever. There’s no sense of urgency. There’s just this vague feeling of “Well, they’re going to steal secrets from the Magic Association Branch Office, so…”

Good job, Madhouse. We wouldn’t want you to overexert yourself or anything. I’m not even being sarcastic. Don’t even waste your time on this shit. Save your effort for Parasyte or something. God knows both your anime series this season have sucked balls.

— We see Zhou Gongjin surrender some of his allies to the Crimson Prince. Those dastardly foreigners will even betray their own kind!

— Elsewhere, Tatsuya’s friends sit around on an aircraft to discuss… sigh, they’re sitting around to discuss Tatsuya’s awesome reviving match. Even in the final episode of the series, we have to sit around and spew a bunch of bullshit about the “magic” in this universe.

— If you must know, Tatsuya’s special power is called Regrowth.

— Blah blah blah, the Gary Stu can restore anything back to its original state. One thus can’t help but wonder why he doesn’t just become a wandering savior, curing the sick and healing the wounded.

Why is he stuck at some shit school, protecting a mentally-ill sister who wants to jump his bones? Well, Miyuki takes umbrage at the suggestion that Tatsuya should help people with his power, because in order to perform this spell, Tatsuya will have to feel 150 times the pain and suffering of his patients. So y’see, the Gary Stu had to hurt himself just to save his friends! Now bow to your god! BOW TO YOUR GOD! He takes upon himself all your pain and suffering just for your sake! 150 times! How do they even know it’s exactly 150 times? Well, it’s a big enough number to make us feel sorry for the Gary Stu, right? Right? Nope. As always, the self-martyrdom is off the fucking charts. But is the Gary Stu really healing us if he gives us cancer in return?

— Miyuki continues, “Do you really mean to say that he should still use that power for others?” Give me a break. Don’t act so fucking self-righteous. When they suggested that, they didn’t know he felt 150 times the pain and suffering of others. The suggestion made sense then, and it arguably makes sense even now. But of course, Miyuki looks so fucking offended for her brother. She’s basically a Tatsuya Justice Warrior, and she can’t believe you plebes would even dare suggest that her oniichan should feel pain for other people’s sakes. She can’t even! Check your privilege, shitlords!

— Plus, this just makes Tatsuya look even dumber. Remember when I said this?

C’mon, if Tatsuya really wanted to, I’m sure he could kill all of the bad guys with a single fart, then revive his allies. Wouldn’t that make more sense?

Uguu, he feels so much pain! So he’ll just revive people, let them die again, then revive them again! Uh-huh, sure does seem as though he’s feeling 150 times the pain, guys.

— Elsewhere, Mr. Polo Shirt is unfazed by the latest developments. Yo, we’ll just launch Plan B. What’s Plan B? Apparently, part of Plan B involves Lu Gonghu becoming a furry. Yeah, the Gary Stu just had to fart in his direction before, but pretending to be a tiger with boobs will somehow change that.

— Naturally, Tatsuya’s dumbass friends get the bright idea that it’s up to them to stop the furry. Hey, someone’s gotta do the dirty work to get some action up in here. All we’ve seen Tatsuya do all episode is revive people! It’s the last episode and all the hero can seem to do is just play God.

— C’mon, Erika, length doesn’t matter if you can’t even hit the pussy!

— I like how the battle between the tiger furry and Tatsuya’s friends is far more tense than all of the previous battles involving the Gary Stu combined. There’s actually a bit of back-and-forth between the two sides. The tiger furry initially has the upper hand, but Mayumi and crew slowly wear him down with their various powers. Would this have been too hard to do with Tatsuya? Does Tatsuya really need to just fart at people to beat them?

— Despite these high school students’ best efforts, Mr. Polo Shirt has infiltrated the Magic Association Branch Office. He even has to smirk as he does so. Oh no, he’s going to steal all of our donuts! But what should he find? Gasp! The Mary Sue was waiting for him all this time!

Then she explains to Mr. Polo Shirt why his spell didn’t work on her. Good lord. Last episode, my ass. Go out with a bang, my ass.

— Y’see, Miyuki’s like her brother. She’s not like her friends whatsoever. As a result, she just freezes Mr. Polo Shirt to death. Her friends had to go toe-to-toe with the tiger furry, but nuh-uh, you ain’t getting the same from Miyuki. She just talks a bunch of bullshit, then she freezes him. Now that’s what I call a climax!

— We cut back to Tatsuya, who’s owning the Chinese badmen left and right. I mean, what else would he be doing? Breaking a sweat? Please. Pretending as though he feels 150 times your pain and suffering? Sure!

— So the Chinese badmen retreat, but the good guys don’t pursue. If they destroy the Chinese badmen’s ship now, the marine life would take too much of a hit. So we’ll just jump ahead in the day… and just like that, it’s now magically safe to gun down the ship.

— Tatsuya aims this fancy ass rifle and just as he’s about to take the shot, the Chinese badmen have the following exchange:

Chinese Badman A: “Just as we thought, the Japanese military didn’t return fire.”
Chinese Badman B: “Humph… As if those people had that kind of guts. … They’re so caught up in their hypocritical concern for the environment that they’ll meekly allow the enemy to retreat.”

Just as he says that, his shit gets annihilated by a Material Burst, which looks like this:

Ho ho ho, we sure showed you foreigners!! There’s no hard-fought victory or anything. Tatsuya just takes aim, the Chinese badmen humiliate themselves, then one explosive fart wipes them all out. Yay, we’ve crushed the Chinese badmen!

— But with just a few minutes left in the episode, the good guys receive news that more Chinese badmen are gathering elsewhere. Quick! We need to wipe more of the dirty foreigners out!

— At the same time, Miyuki has a boring, pointless conversation with her aunt that doesn’t go anywhere. Just something about how Tatsuya can’t break his vow.

— This is the biggest lie I’ve ever heard.

— But cut the bullshit. This is just another excuse to watch the Gary Stu fart at the Chinese badmen some more. Look, he even takes off his pants this time, so you know the fart is serious business:

Let this image of the Gary Stu’s ass imprint itself into your memories forever, so that you may never forget Tatsuya, our one and only savior. When you’re 60, be sure to tell your kids that you were there to watch Mahouka. That you were there…

— Oh yeah, the Gary Stu is breaking some serious wind: 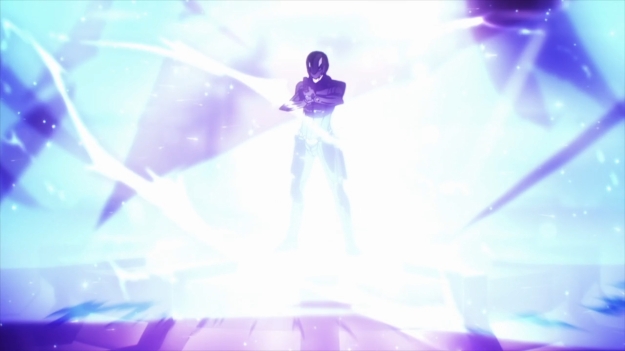 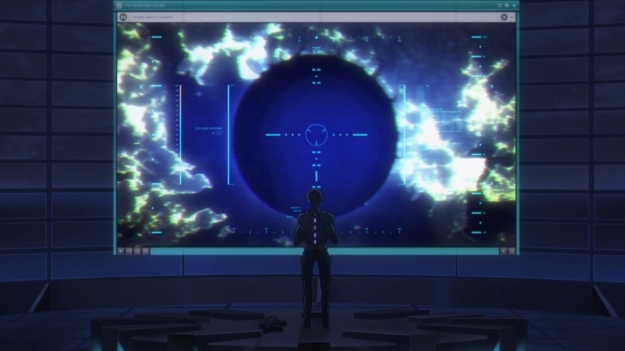 The Gary Stu blows a giant chunk out of the earth with his own hole. By itself, this event is so momentous, future historians refer to this day as “Scorched Halloween.” Yeah, I’m not even shitting you. And then… and then what?

— A monologue from Miyuki is all we get:

We don’t even get an ending. The Gary Stu farts twice, and the show is now over. What was the point of all this? That some new fucking era has begun? Oh wow, what a conclusion. We just killed a bunch of people and ushered in a new era of destructive power, but yo, magic is so great!

— After the credits roll, Miyuki jumps into her returning brother’s arms:

But elsewhere, their aunt says something about inviting the two of them over to her place, and Tatsuya — even though he’s probably miles away from his aunt — suddenly looks like he needs to take a massive dump. Well, I’ve got to take a massive dump. Look, the Gary Stu hears all. Because I just sat through twenty-six godforsaken episodes of this trainwreck. But dear lord, they want to make a sequel, don’t they?

— Is this the worst anime I’ve seen in years? Yes.

49 thoughts on “Mahouka Koukou no Rettousei Ep. 26 (Finale): The least exciting ending ever”