Another shoujo? Sure, why not.

— Especially when it seems like this one will take its protagonists on an adventure. I’m so tired of the high school setting. Sure, there heroine here is still young, and if this was any other anime, she’d be in high school too. But at least I don’t have to deal with all those same cliches. We’ll have other cliches instead!

— In case you’ve forgotten, the titular Yona is in love with her… ahem, cousin, but one day, she finds that he has murdered her dad. Gosh, that’s not cool. Hopefully, that’ll teach the girl to stick to hot bishies that aren’t related to her. But we’re getting ahead of ourselves. Let’s watch the episode proper.

— I don’t hate the OP. There isn’t any crappy singing, and that’s always a plus in my book.

— On the other hand, I’m a bit wary by the fact that Yona seems to be one of the few female characters in the cast. I’m never a big fan when a story has one character surrounded by nothing but members the opposite sex. It feels harem-ish.

— The surrounding mountains look so small.

— They’re having a ceremony to celebrate Yona’s upcoming birthday (she’s about to turn 16), but it isn’t necessary for her to appear before the people?

— Meet Hak, one of Yona’s love interests. He’s not only a childhood friend and a servant of hers, he’s also one of the kingdom’s five generals. Pretty prestigious, actually. When I first heard about the show, I thought maybe our princess would eventually fall in love with a servant. But of course, he has to be a badass general in his own right.

— Like another princess this season, Yona is not very endearing at the start of her story. She is downright spoiled and a bit full of herself too. Let’s hope she doesn’t actually encourage genocide at any point in the episode.

— Meet Soo-won, the cousin that our heroine is initially in love with. Yeah, that was the younger him, so he looks kinda… effeminate. Maybe the princess is just in love with herself. This is what he looks like now, but as you can see for yourself, not much has changed (except for the whole murderous bastard part). By the way, Soo-won sounds like a Korean name.

— Yona grumbles that he treats her like a child. She admitted just earlier that they haven’t seen each other in a while, so his last memories of her are from when she was, well, a child. Plus, she’s technically still fifteen for at least another week, so… a child it is. Even if she was 16 already, she’d still be a child in my eyes, but that’s neither here nor there… 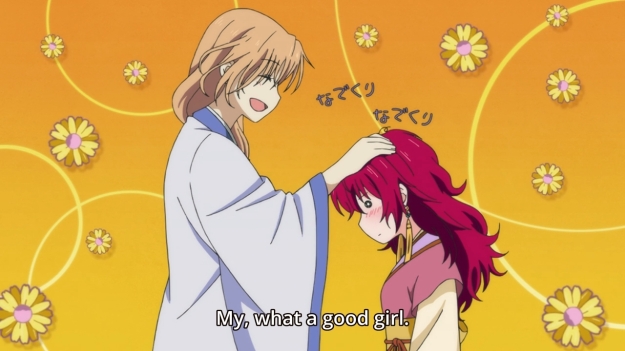 — A-bloo-bloo, she smells of the finest incense and lotions. Give me a break. I’m kind of getting fed up with her already. Hate to say it, but please kill the king already so we can advance the story. I’m not sure how much more I can take of spoiled Princess Yona.

— We get a flashback scene from when Yona and Soo-won were kids. Aaaaaaand she was even more of a brat back then. I guess this was excusable at the time, however, because her mother had just recently passed away. Too bad time hasn’t done the girl any good.

— Soo-won: “I know! I’ll be your mother, Yona!” That’s a tall task. You could start off by being a big sister, bro. I kid, I kiiiiid… Anyway, because he cheered her up during that dark moment in her life, she has been in love with him ever since.

— The next morning, the two bishies play with each other much to Yona’s dismay. Oh, they’re just taking target practice…

— Our jealous princess thus want to participate in the same competition, but her overprotective dad won’t let her be anything but a fine china doll in his castle.

— Oh lawwwwwd. Cousin, please! Well, judging by the surrounding geography, I suppose they are the mountain people…

— Yona: “When he was a child, he was cute like a little girl…” And now he’s pretty like one!

— In an attempt to make Soo-won jealous, Yona claims that have been talks of an engagement between her and Hak. It only blows up in her face, however, when Soo-won congratulates her on said nonexistent engagement. “How could you believe that lie?!” Yona whines. Why don’t you, uh, just tell him how you feel? Naw, I’m just kidding. Obviously, you can’t. What kind of relationship would it be if both parties were open and honest with each other!

— The king is here to rain on Yona’s parade even further: “You can’t have Soo-won!” Uh oh, do you really think putting your foot down now will actually work? It’s okay, princess. He’ll soon be several feet down.

— Yo, he’s always given her whatever she wanted! He then lists off a bunch of superficial stuff like earrings, necklaces, a flower garden…

— Essentially, the man she marries will become king, and he doesn’t want Soo-won to be the king. I’m sure he has his reasons. He’s spoiled his daughter, but I’m not going to assume he’s incompetent at ruling his kingdom. He probably knows something he has never told his fifteen year old daughter. He tells her, however, that marrying Soo-won would only endanger her cousin, but I’m not sure I’d take her father’s words at face value. As expected of an emotional teenager, the princess quickly turns on her own father: “You’re a cowardly king who is too afraid to touch a weapon.” Oh boy…

— And now it begins. While Yona is sulking all by her lonesome, a hooded figure appears out of nowhere to threaten her life. When she runs into a building to hide, Soo-won grabs her and covers her mouth as if to keep her from making a sound. When the girl tells him about the hooded figure, however, he acts as though he wasn’t even aware that she was being chased. So why did he cover her mouth to muffle her screams, then? Gosh, Soo-won… you’re being shady already!

— I bet Soo-won doesn’t want to get close to Yona, however, because he already knows what he wants to do, i.e. kill her dad. The story is setting Soo-won up to be this tragic figure trapped eventually destroyed by an unfortunate set of circumstances. In another universe, he and Yona probably would probably have gotten married and lived happily ever after. But for whatever reason, he’s after the king’s life, and it isn’t just because he wants the throne. After all, if he just wanted the throne, he would just convince the king to let him marry Yona. The way he’s acting here, he has a personal vendetta.

— Min-soo? Lots of Korean sounding names in this anime, in fact. If I didn’t know any better, I’d think this was a Korean drama… oh god, is Yona going to get eye cancer?!

— It’s the day of the big banquet to celebrate Yona’s coming-of-age, but Hak confides in Soo-won that something feels off. He thinks bad people have already infiltrated the castle. Little does he know…

— Meanwhile, all Yona can care about is how much Soo-won loves her hair. So later that night, she goes to see her father to talk about the Soo-won situation some more, but…

— And now, it seems as though she’s about to be executed by those insurgents the king had previously mentioned. That hooded figure chasing her earlier in the episode was probably one of these insurgents too. In any case, Yona cries for Soo-won, but only Hak comes to save her. The episode comes to a close, but I assume he and Yona will soon escape from the castle.

— I don’t know, I was kind of entertained by the first episode. The animation’s not bad, and the characters aren’t completely boring. Sure, I don’t like Yona too much, but it’s the start of the story, so the princess has to come off like a spoiled brat. Now that she’s left the confines of her castle, she has no choice but to grow up. We can then see if Yona’s a character worth caring in the episodes to come.

8 thoughts on “Akatsuki no Yona Ep. 1: That awkward moment when your love interest murders your dad”