No more flashbacks, please. So of course, our fugitives are still on the run. The nearby villages are too unsafe, so there’s only one place left to go: Capital Fuuga. Luckily, this also happens to be Hak’s hometown.

— Needless to say, I can’t help but imagine that Hak is simply courting disaster for the place he calls home.

— Instantly after the OP, Hak and Yona have already arrived at their destination. Boy, that was fast. I guess Fuuga wasn’t that far away after all.

— News don’t travel fast in these times, so the guards out front have no idea why Hak has returned. Hell, they apparently don’t even notice Yona standing beside him. With Yona often hidden away behind the palace walls, however, no one seems to realize who the girl is. Then again, who else would have such a ridiculous hair color?

— Hak refers to Yona as simply a court lady in training. When the curious folks of Fuuga bombard the princess with questions, she simply… uh… passes out.

— All of a sudden, Hak looks really gigantic.

— Long story short, the leaders of the five tribes have been called to the castle to discuss a very important matter. Mun-deok claims he doesn’t know where Hak could be, but the other leaders aren’t too trusting. In fact, rumors are circulating that Hak killed the king and took Yona hostage. That doesn’t make any sense, though. What would Hak achieve by doing this? We don’t have a plausible motive.

— Likewise, Soo-won doesn’t pin the blame on anyone. He also doesn’t want any of the leaders to harm Hak or Yona should those two be found. He simply wants them returned to the castle. Okay then. When you consider the extent of his feelings for Yona, this all seems kind of creepy to me, actually. After all, it’d be easier to silence her with a knife.

— The other leaders readily throw their support behind Soo-won; General Gang is already directly working for the bastard. They also seem rather eager to ready the entire kingdom for war. I can’t help but wonder if the other tribal leaders sense a potential power play in the making. They can back Soo-won for now, but who’s to say that the kid will be a very effective leader? And should he fail, one of the leaders could rise up and seize control of the kingdom. Mun-deok, on the other hand, isn’t interested in such affairs. As such, he can act straight-forwardly. I don’t know… it’s just a thought. Otherwise, you’d have to assume that the leaders aren’t very bright, and as a result, they’ve quickly and conveniently fallen in line behind such a young and unproven king. That’s a less charitable reading of the situation, so I’ll just go with the first interpretation for now.

— Mun-deok won’t throw his support behind Soo-won until he can marry Yona. Maybe that’s why Soo-won wants her returned to the castle unharmed. But how long can Mun-deok keep this up? How long before conspirators decide that he should die next? If you need the blessing of the five leaders to become king, you simply have to replace an obstinate leader with a more receptive individual.

— As an aside, I really do not like the sound mixing in this week’s episode. The background music is way too loud, and it ends up drowning out the voice actors. 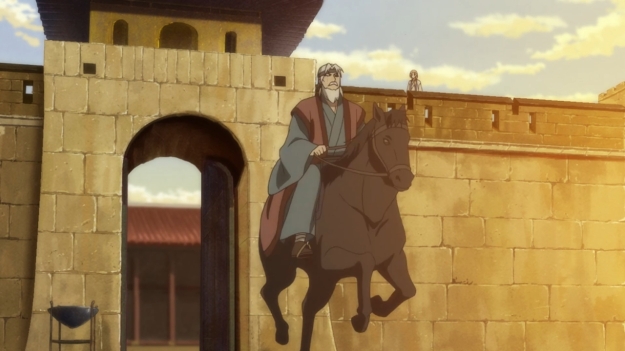 — As Soo-won watches Mun-deok ride off on his horse, the guy can’t help but feel happy to have once been considered a grandson in the old man’s eyes. Not anymore, of course, but still… If Soo-won is still that affected by such sentimentality, I can’t help but wonder if he’ll crumble before all this is over. Someone who cares that much about his friends can’t be a conspirator for long. Eventually, he’s going to crack from all that guilt.

— Yona wakes up to some warm food and new clothes. Man, she was spoiled then and she’s spoiled now.

— Oh god, that’s a brother? Brother, please. As you can probably tell by the kid’s hair, he’s not related to Hak by blood.

— For now, Yona has to disguise herself as Rina. I would like to see the show go even further with this. The princess should really do more to change her appearance. Perhaps cut her hair, do her make-up differently, or take off those cumbersome earrings. Seriously, who sleeps with tassels on them?

— So first things first, I guess the girl has to learn how to do laundry. There’s just one small problem: the river has dried up. Everyone seems so surprised by this too. It’s like it just happened over night or something. That’s a lot of water to go missing in such a short period of time.

— Mun-deok returns and immediately refers to Yona as the princess. C’mon, dude… people are listening! Shhhh! 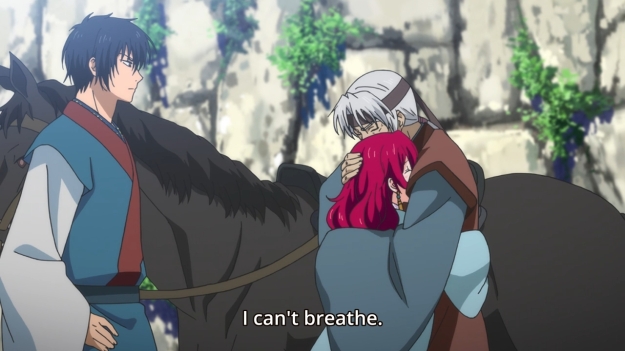 — Ooooookay, you can’t expect me to believe that a dinky little dam like that is enough to stop an entire river. Why would the water just overflow and spill over the top? River dams have significant elevation changes, not just… two meters.

— And man, the Fire Tribe are always assholes, aren’t they?

— Mun-deok doesn’t want to pick a fight, but someone in the background goes, “Why? They stopped the river and killed Heang-dea!” Wait, what?

— Mun-deok seems confident that the Fire Tribe won’t do more than dam up a river. Hmm, I don’t know about that. I know he’s old now, and as a result, he less inclined to fight if he doesn’t have to, but that sort of mentality seems a bit naive to me.

— Right on cue, some dude from the Fire Clan isn’t happy that they haven’t provoked a response from the Wind Clan. As a result, he wants to “crush” a bunch of merchants… geez, how can you guys just hurt people like this at a drop of a hat? Ambitions for the throne or not, it’s silly that the bad guys have absolutely no compassion whatsoever.

— This Tae-jun guy wishes he had gotten his hands on Yona instead. After all, he’d be king by now. It’s sad how the girl is treated as nothing more than a ticket straight to the top. I mean, it makes sense and all, considering the time period that this anime is set in, but it’s still sad. She’s just a piece of property in a lot of people’s eyes.

— One of the anime’s downsides is that the characters will often start whining like little children for no reason. It just detracts from the atmosphere and makes the whole thing feel incredibly immature.

— The little kid suddenly collapses out of nowhere. Holy shit, everyone’s so weak in this anime. Apparently, the kid needs medicine that they often get from those merchants we had spoken of earlier… y’know, the ones that are currently being crushed. Nevertheless, Mun-deok isn’t eager to retaliate. Sounds like the Fire Clan will just escalate things even further if he won’t do anything.

— Quick! To battle, my friends! We need to save this otouto! Imoutos, otoutos… any way you want to slice it, younger siblings are a blight. They drag down every story. Need a tragedy? Hurt a young child! Or a kill a cat.

— Somehow, the formerly dead Heang-dea will fix everything by riding off to the eastern forest to procure medicine. In the meantime, everyone else will just make do with what little water they have left, I suppose.

— Afterwards, Yona’s frustrated that she can’t do anything to help. At first, he jokes that she can try and be a little sexier. But in reality, he tells her to live a carefree life. How boring. Who can exist like that? She may as well be a pet. Everyone else already sees her as object to be manipulated for the throne. It doesn’t help either than the main love interest sees her as nothing more than a victim to be protected and coddled. Let the girl do something, goddamn.

— I also half-expected Yona to protest, but she simply rubs her cheeks and watches Hak walk off. Lame.

— Hak goes to see Mun-deok later that night, then tells the old man to approve Soo-won’s ascendency to the throne. As for Hak, he’ll leave Fuuga. This way, the Wind Clan won’t be troubled by anyone. In the meantime, he expects them to just stash Yona away like some precious artifact. Welp. I don’t know what Hak hopes to accomplish. If he keeps not-resisting, it’ll become harder and harder for them to do anything in the future. Not only that, he should consider how this makes Yona feels. She’s lost everyone close to her, and now, she’s going to lose Hak too. It’s just a poorly-conceived plan.

— But it doesn’t matter. We all know she’ll leave Fuuga with Hak anyway.

2 thoughts on “Akatsuki no Yona Ep. 4: The Fire Clan is at it again”