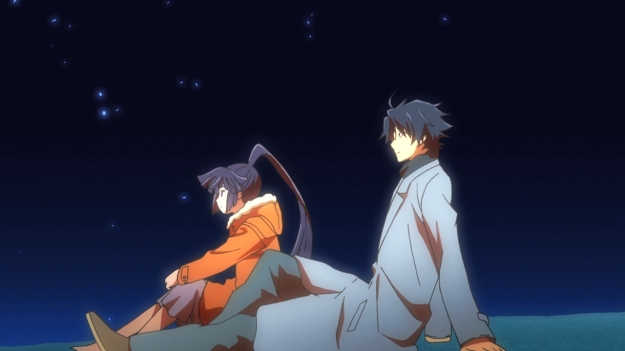 This episode lost me. I watched that scene with Akatsuki and Shiroe on the beach probably like four times. I was trying to see if I could glean anything interesting from their conversation. Nope. Not going to happen. The drama is just straightforward. To top it all off, the emotional breakthrough at the end, i.e. the part where Akatsuki finally managed to ask others for help, fell flat because I’m just that tired of our ninja heroine and her problems. It doesn’t help either that the solution is the age-old “You’re my tomodachi!” feelgood nonsense. I get the gist of Akatsuki’s story. I really do. She’s an antisocial loner who only ever depended on Shiroe. In a video game, this would be fine.

Video games aren’t real. Video games have a singular focus, so you can just concentrate on whatever that focus happens to be, i.e saving the princess, robbing the bank, defeating the overlord, etc. Video games serve as escapism, so you don’t have to take anything seriously. You don’t have to confront your personal hang-ups and flaws. If Elder Tale was simply a video game, Akatsuki’s worth would be measured by her strength and her strength alone. If she’s not strong enough, all she has to do is get stronger. There’s a reason why she chose to become an assassin-type character. She can just skulk in the shadows, be self-dependent, so on and so forth. But Elder Tale is different. It’s slowly becoming more and more like the real world everyday.

Hell, Roderic speculates that the Apocalypse is still an ongoing phenomenon. I don’t know how it’s supposed to work, but apparently, the world is expanding! Long story short, drastic changes are still coming. And in such a world, you can’t just do everything by yourself. You have to trust in others, ask for help, etc. Even Shiroe knows this as he reached out to others in his attempt to keep Akihabara from sinking into a deep finnacial crisis. Nevertheless, he still failed, so what chance does Akatsuki have? They both learn some very painful truths the hard way. And in the end, it is supposed to be an emotional breakthrough when our antisocial nerd girl with no direction in life can suddenly overcome her angst, self-pity, and low self-esteem to reach out to the other girls for help. So again, I get the gist of her arc. And you know what? The drama still fell horribly flat. Why? Because the delivery is all wrong.

Half the time is spent watching Akatsuki sit and eat in Lenessia’s room. The other half is her skulking around, monologuing to herself about how much she misses Shiroe and how weak she is. Her story just is not engaging. And after three episodes of the same thing, it also ceases to be interesting. The harsh truth is that Akatsuki can’t carry her own arc. If we had spent maybe an episode at most to delve into her problems, her story would make for a decent change of pace. A fitting sidenote to accompany and bolster the themes of the larger story. But when you elevate Akatsuki’s arc into the primary story of the last few episodes, you lose me. There’s just not enough depth here to justify the amount of attention that she gets. This is made doubly worse because Shiroe’s raid had been occurring simultaneously with Akatsuki’s angst!

Aside from that one episode that was heavy on narration as Shiroe painstakingly explained to the audience how MMO raids worked, we’ve hardly seen him and his raid group again. So it’s hard for me to watch these last few episodes and not think, “Man, I could be watching Shiroe’s group tackle a raid boss instead.” Character development is fine. But Akatsuki’s story needs judicious editing. She’s just not main character material. Yes, she’s a main character by designation, but again, she can’t carry her own arc. She’s not rich enough as a character to accomplish this. By trying to fit a square peg into a round hole, we ended up with a horribly redundant and repetitive story about the need to make friends.

Anyway, we don’t see enough of Crusty either. Doesn’t it seem like Roundhouse Code has pretty much disappeared off the face of the planet as well? But I digress. What’s more important is flavor text is meaningful now or something. And to demonstrate just how important these flavor text are, Sansa’s scythe was going to fuck her up. Being the noble knight that he is, however, Crusty saves her… and gets himself sent to God knows where. Maybe dead, but we’ll see. But y’know, the whole flavor text thing got me thinking. We know the crazy murderer bought that one sword that Akatsuki wanted so badly. She recognizes the sword herself. So I went back to episode two to read the flavor text on that same weapon and this is what it said:

Well then… maybe they can just hope to disarm the guy, and he’ll come to his senses.