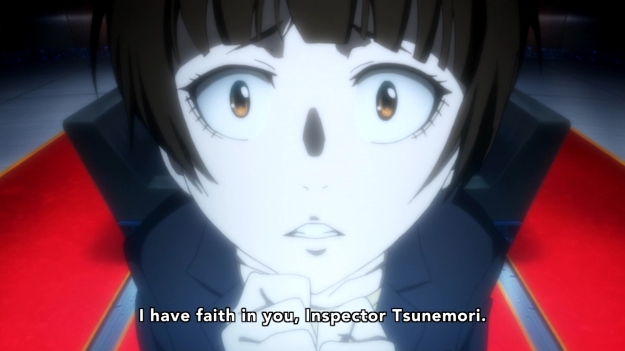 — Oh man, there’s nothing like the sweet smell of exposition to kick off the start of a Psycho-Pass episode! Yes, I can see that Kamui has taken five hundred passengers hostage, but thanks for confirming this fact for me over and over, everybody.

— So much pointless dialogue: “Feel the pain that comes from being the reason someone precious to you died. Paint yourself black, Akane Tsunemori.” So let’s see, the heroine looks troubled, confused, angered, etc.? That’s not enough! Spell it out to the audience! We gotta make sure they know exactly how the girl feels, and what Sakuya wants her to feel. Wait, double-check to make sure the audience also knows that Kamui has taken five hundred people hostage! Do they know that? Do they?! Cut back to Kasei! Have her talk really slowly and smugly about the topic again. Maybe she can offer a new perspective!

— You know the show is cutting corners when instead of seeing Kamui’s underlings shoot their Dominators at the hostages, we instead cut to the outside of the train with bright lights flashing through the windows. 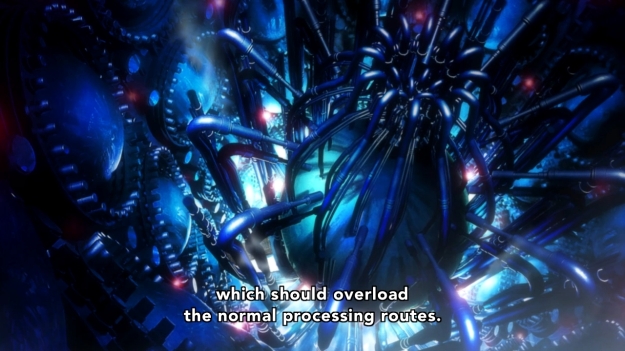 — So the plan is to literally overwhelm the Sibyl System, which would… overload… the normal processing routes? What is this? A literal information traffic jam? Are you serious? I mean, if the Sibyl System gets overwhelmed or something, I imagine that it would slow to a halt, hang, reboot, or whatever. I don’t expect some “bypass” to suddenly fix any of those problems. But whatever. Maybe the technology works in ways I don’t know about!

— And I love how Kasei is just sitting there, talking to Kamui, but she’s really talking to nobody in particular. More accurately, she’s really just filling us in on what is happening, because the story can’t be assed to tell itself in any other way. It’s awkward and stupid writing.

— Kasei informs Akane of her plans to blow up the entire train and its 500 hostages. Naturally, Akane opposes this plan. Kasei’s reasoning? Oh, they’re probably latent criminals by now. Yes, yeeeeeesss! Embrace the dark side! Become the moustache-twirling villain that Tow Ubukata wants you to be! The Sibyl System is no longer this cold bastion of pure logic, using numbers and algorithms to push East Asian values to the limits! It’s now just a maniacal old lady who blows people up because “Meh, fuck them.” Meanwhile, Sakuya is good for nothing but grinning stupidly at no one. 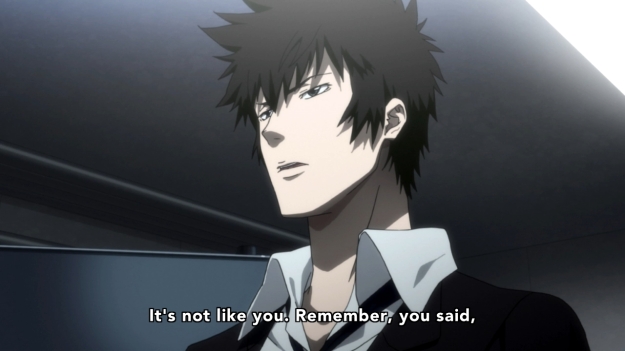 — Unfortunately, it looks as though Akane’s poor grandmother is dead. But don’t worry, because the ghost of bishie past is here! And this time, he doesn’t turn into that weirdo Sakuya. To top it all off, this is all it takes to set Akane on the right path. This is literally all it takes. Akane’s grandmother just died, so you think she might compromise her ethics. You think she might now have to grapple with the ethical struggle within her, and that this is no easy task. But it’s okay! Let’s just talk to a figment of her imagination for a minute! That’ll do the trick!

— It’s a good thing we huffed all that second-hand smoke. No doubt that cocktail of chemicals is what allowed Kogami to magically appear in Akane’s mind and talk some sense into her.

— Kamui is a collection of individuals, so if Sibyl System can judge Kamui, then likewise, the Sibyl System can be judged. And that’s apparently… terrible or something. I don’t really see it, but that’s what the characters tell me. I mean, why should the Sibyl System fear being judged? It’s not evil. Well, up until now, it wasn’t evil. In season one, it certainly did things that we disagreed with. It limited people’s freedoms, and it created the sort of society that we wouldn’t want to live in. But for its purposes, the Sibyl System created a stable society that maximized happiness, and every action it took was born from the cold, hard logic that the collective happiness of everyone was more important than individual trivialities.

Look at it this way. East Asian cultures tend to emphasize the group over that of the individual. East Asian cultures tend to prioritize social harmony and the collective well-being of the community of that of the individual. In that sense, the original Sibyl System simply took these same values to the extreme. The first season of Psycho-Pass is unsettling, because in many ways, it was Urobuchi’s heavy-handed response to the society around him. Again, the original Sibyl System wasn’t evil. It merely prioritized different values, and it took those values to the logical extreme. That’s not evil; that’s provocative. And with that in mind, I don’t see any problems in judging that Sibyl System. You wouldn’t really get a color out of it.

— As for the sequel, however, all bets are off. I mean, The Sibyl System is deliberately corrupting people, involving itself in massive conspiracies to undermine its foes and rivals, so on and so forth. Basically, the new Sibyl System is clearly evil, so I guess that’s why it doesn’t want to be judged.

— I’m not sold, guys. I’m just not sold. Sure, a sequel should be able to stand on its own, but when it opts to make such silly changes to an established formula, then nobody’s going to like it. And the way I see it, the old Sibyl System was intriguing if somewhat frightening. The new Sibyl System, however, is just cartoonish.

Meanwhile, Kamui might be a composite of many different people, but these parts all work together towards one goal. There aren’t conflicts within Kamui’s thought process that we know of. Likewise, the brains within the Sibyl System all work towards one goal. They don’t each have their own individual wills and goals to pursue. All they do is sit there and work as a single individual. Basically, you can’t just compare society to either Kamui or the Sibyl System. The latter two operate as if they’re individuals. They may be a collection of different minds, but they are each nevertheless one. Society, on the other hand, is a loose term to describe a group of people, but you can never call society an individual. So this risk of giving society a collective Psycho-Pass when the individuals themselves are clear… well, I don’t see it. It’s just not valid. There’s no danger here. I think Kasei, and thus the writer, is just overthinking the problem.

— Oh hey, Mika is still useless. What a surprise.

— Akane arrives at the spot where she’s supposed to meet Kamui, but she finds Sakuya there. All of a sudden, she knows everything that he’s up to! Up until last week’s episode, however, she didn’t really suspect a thing. The story’s just too rushed. I don’t even know why they bothered with this second season at all, because nothing develops organicially.

— Kamui then shows up, and takes aim at Sakuya. At the last second, Akane tries to prevent what should have happened a long time ago from happening. Are you serious? Is there any reason on this planet to keep someone as dangerous as Sakuya around? Oh right, she’s just protecting the law, you guys. The funny thing is, the Sibyl System itself thinks that Sakuya is a target for enforcement. Not only that, Sakuya will certainly kill Kamui if Kamui doesn’t kill him first. So with all of that in mind, screw these silly laws.

— Anyway, next week’s episode should be the last, so at least we won’t have to suffer through this much longer.