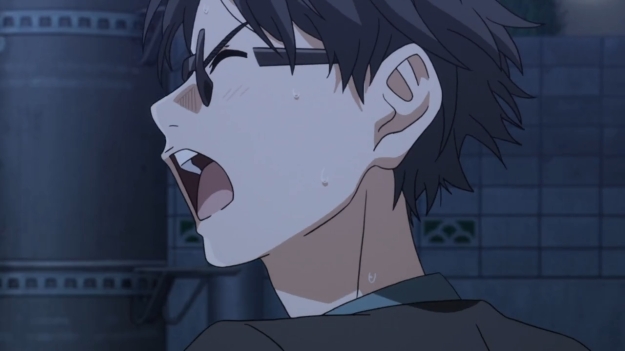 Did we just spend three episodes on three performances? I think we did. In any case, Kousei saw his mom’s ghost smiling at him at the end of last week’s episode, so I expect that subplot to be done and over with, right? Right? Of course, it’s silly for years and years of trauma to be unlocked by a simple, grit-your-teeth performance, but hey, this is anime. And if you’re going to pull that on me, then you may as well shelf the whole trauma completely. But let’s see what this episode has in store for us.

— So Emi is kind of… in love with Kousei? And Takeshi refers to the bespectacled protagonist as his hero? Welp, the story’s as dramatic as always.

— Let’s rank the girls, though. It’s crass, but hey, I think the show is crass. For me right now, it would have be…

Thoughts?! I know people love to have and ask about thoughts!

— Y’know, I feel sorry for anyone who has to sit directly behind Takeshi. Thankfully, it’s not a packed house.

— Haha, this judge is such a fucking jackass — the only type of jackass that you’d expect to find in an anime: “A competition is is a sacred garden of music. Under no circumstances is it a place to find yourself.” Lah-di-fucking-dah, dude. Just disqualify him and move on. I love how he’s got an entourage of people behind him, but he’s merely a judge for a competition involving kids in middle school. Every show needs a villain, apparently.

— We run into this lady who used to know Kousei and his mom. Her name is Hiroko, and she says, “Hey, a woman changes her ‘do every time she finds a man.” What an astute observation!

— Anyway, she just happens to be Japan’s leading pianist! And she’s hot! Wow! What else have you got for me? Can she also cha-cha?!

— Oh no, how dare former family friends hug each other in public! Scandalous!

— Apparently, Hiroko had encouraged Kousei’s mother to get him into piano. She probably feels somewhat guilty about that, but hey man, the only person to blame here is the mother and she’s long gone. She smiled, so she better be gone.

— Even Hiroko could tell that his performance was one big love letter. Well, duh. Kousei was practically rubbing his golden balls in our face. If you don’t see love in that, then there’s something wrong with you. Nevertheless, Kousei’s a little too scared to pursue Kaori’s affections: “She’s the girl who likes my best friend. And I’m Friend A, after all.” Big deal. They’re not even dating yet. Get some of those golden balls back from the audience, and just confess to the girl!

— But considering how it took three episodes to get through three performances, however, it’ll probably take the rest of the series for Kousei to reveal the depth of his feelings to Kaori.

— Takeshi is disappointed to see that his hero has been disqualified. But you can look at it another way. The guy doesn’t know why Kousei disappeared for two years, but the fact that the latter managed to return after two years has to be worth something, right? Sure, it took some serious bullying and emotional manipulation from his two closest female friends, but the hero’s back, baby!

— And besides, heroes crumble all the time. It’s like a thing in comic books. Whenever fans start to bored of a hero, they get their backs broken or killed just to perk everyone’s interest again.

— Still, Takeshi demands to know what Kousei has been doing for the past two years. Just tell him. Just tell him that your mother died and as a result, you were too traumatized to play the piano. Seriously, I just want the protagonist to stand up for himself for once. For fucking once, tell these asshole characters off. Get them off your goddamn backs. You don’t owe them a fucking thing. They’re not even your friends.

— But Kousei does the typical anime thing and just goes, “Welp, this is me now! I’m gonna give it all I’ve got!” Then he spouts platitudes like, “We’re still on a journey!” Grooooooan.

— These middle schoolers proceed to stand there and stare at each other until Kousei eventually walks out of the place… without his friends. Then at some point, I expect him to turn around go, “Yo, where is everybody?”

— But that’s the problem with this anime. It will have the main character walk out the door by himself just for dramatic effect… even though we see him later walking home with his friends. C’mon, man. Just keep it real. Stop trying to pump up every dinky little scene. Keep it real.

— Tsubaki: “You go talk to him! You’re a man, right?” Tsubaki didn’t have any trouble forcing Kousei to play the piano again, but when it comes to consoling the guy, it’s apparently up to a man to do it.

— This entire time, Kaori’s beaming with happiness, because this sort of totally unpredictable behavior fits her “manic pixie dream girl who’s about to die” persona to a tee.

— The very next day… does Hiroko wear the same outfit over and over or what?

— Hiroko gets mad at Kousei for making her worry, but she hasn’t really worried about the guy for the past two years so…

— Oh, the irony… Oops, she had a brown belt on yesterday. How silly of me!

— Anyway, Kaori and Kousei have been invited to play at some gala. As always, Kaori makes all the decisions. Kousei has no say on anything, including their song. This is what she picked out, by the way:

It’s a nice song, but kind of simple.

— Kaori hugs her violin and says something about how she had once dropped it. Maybe she was not appreciative of her talents or something before she got diagnosed with whatever it is that she’s currently sick with. In any case, Kousei’s all, “Man, look at that tiny back.” The more vulnerable-looking these girls are, the more they just tug on our heart strings, huh?

— I hate how much recapping there is in this series. Right now, Kousei’s explaining to Hiroko why he got back into music. But we just spent the last ten weeks watching him get back into piano, so I don’t need to hear his explanation to the lady! 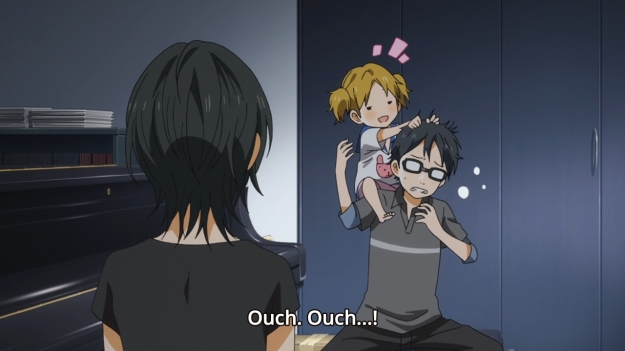 — What will forever remain a constant is that women of all ages will never have any trouble walking all over Kousei. So naturally, Hiroko will become Kousei’s tutor.

— It’s a metaphor, you guys!!! I personally prefer to heed the immortal words of the great Ron Swanson: “I hate metaphors. That’s why my favorite book is Moby Dick. No frou-frou symbolism. Just a good, simple tale about a man who hates an animal.”

— Kaori asks Kousei what he used to lean on for his performance. He says he had her. Not exactly a love confession, but a pretty intimate detail, I guess. As the guy walks off, she thinks ominously to herself that she won’t always be around to help him. Dun dun dun… tearjerky terminal illness subplot… engaged.

5 thoughts on “Shigatsu wa Kimi no Uso Ep. 11: Onto the next big event”