What. A. Terrible. Episode.

— Hey look, here’s a flashback involving Mado. I actually forgot he once existed until the anime reminded me.

— The evil ghouls are just looking more and more ridiculous these days. They now look like some kind of video game boss instead of, well, an actual individual with a personality of his or her own. Think about it, though. Rize looked demure on the surface, which belied her true nature. Shu fancies himself a gourmand, so he’s an over-the-top dandy who likes to insert random foreign phrases into his speech. Jason was sadistic, so he looked the part. I mean, these characters were neither complex nor highly original, but at least you could see some effort put into their creations.

Nowadays? These new villains just look some generic variation of Death. It’s so “I’m 16 years old and I think this is cool” levels of cringeworthiness. It’s like halfway through the story, someone said, “Let’s switch the anime with some shitty fanfiction of it, and see if anybody notices!” I’m afraid that the story might have just jumped the shark.

— And after the OP, we get a strategic meeting with maps and shit. I get it. The bad guys are mounting an army and taking over huge swaths of territory. The CCG is like an army themselves. But why are we telling the story from such an impersonal, birds-eye view of the conflict? In other words, why am I staring at just a colored map to convey the path of destruction that the Aogiri Tree is cutting? Come on.

— Anyway, we finally cut to Anteiku, which is okayish. I mean, at least these are familiar faces that the show has developed. Touka is apparently studying hard to get into the same university that Ken had attended. Too bad it doesn’t look like he’s going back to school anytime soon. As an aside, that hairstyle is ridiculous. Is she trying to mimic Ken in seeing just out of one eye as well?

— It kinda looks like Hinami had a growth spurt… if that matters.

— Aaaaand we’re back to strategic meetings. Mmm, tell me a story in the driest way possible. That’s how I like it, y’know.

— And more conversations between uncharismatic members of the CCG…

— I think this is the second time the anime has given us a close-up of these damn cups. They’re nice-looking cups, but c’mooooooon.

— Ten minutes into the episode, we finally see Ken. You remember Ken, right? He’s the protagonist of the serie–… whoops, the scene with him is over. He also didn’t utter a single word. I guess he’s not the protagonist anymore.

— And more members of the CCG again. As the story has grown in scope, it has also lost sight of what made it initially appealing: a story about individuals caught between two worlds. In fact, a personal story about individuals grappling with their identities. Now, I’m dealing with these goofy CCG fuckers with no interesting backstories whatsoever.

— We cut to Amon, who is currently paying his respects to his former partner. He goes, “The binge eater is still in hiding….” Well, I hate to break it to you, buddy, but…

— So let’s create more of them! Here’s Akira, Mado’s daughter! Even when Tokyo Ghoul was good, Mado was easily the worst character in those arcs. And this is why we’ve decided to continue his legacy by turning his daughter into Amon’s partner. Whee!

— STRATEGIC MEETING NO. 24534583! Oooh, it seems that we have some news. Let’s hear what they have to say: “…the elimination of the Owl and Aogiri is CCG’s top priority.” Really? That’s the big announcement? What else are you going to do? What else could possibly be CCG’s top priority? Jesus fucking Christ.

— I heard you fuckers like charts, so I’ve even printed out a few for you guys! Fuck yeah! No color printing, though. Shit, I ain’t made out of money.

— The sad thing is, these CCG people are actually debating whether or not Rize still exists. They’re even discussing Shu a bit! Wow!

— One of them wonders why Mado’s daughter is referring to the binge eater as a she, so the lady replies, “The victims were limited to young males. I only call her ‘she’ by way of assumption.” That’s pretty heteronormative of you!!! What if the binge eater was a ghoul version of Jeffrey Dahmer!

— Apparently, Akira is rubbing her colleagues the wrong way because she is brusque in dealing with them. Amon asks her to be more polite, especially since he’s technically her senior. She shoots back with how being polite is a waste of precious time. Then she gives us an explanation that sure does feel like a waste of time. Nice.

— Alright, I’ve had enough of the CCG folks. The story returns to Touka and the rest of Anteiku. Everyone’s just trying to move on with their lives, but of course, I’d be a little pissed deep down. They all risked their necks to save Ken, and he pretty much disappeared without much of an explanation.

— For a brief moment, Tokyo Ghoul returns to its roots when Touka stares out the window — mirrors and windows being important motifs in the first season. The big struggle here is that Touka is trying to fit in with what she thinks is the human world this whole time, but even the world itself has an identity problem. What is real anymore? This boring life of hers where she studies for entrance exams and works part time at Anteiku? Or the world where a war is brewing in the other districts, threatening to spill over and consume the rest of the country? All this time, Touka has tried to be less like a ghoul and become more human, but being a human means she has to ignore the fact that Ken is caught up in this war. She has to pretend that the conflict between Aogiri Tree and CCG doesn’t matter to her, because she’s just a high school student trying to get into college. The thing is, she can actually do something about the war. She’s not a weak ghoul by any means. How much longer will she pretend that her human responsibilities are more important than dealing with a war in Tokyo itself?

— Then after twenty minutes, we see Ken again, and he finally utters something: “Mm-hmm.” Nice.

— That Aogiri Tree girl with all the bandages sneaks off to some hide-out, then takes off her bandages only for us to see the bottom half of her face. Why? So I know that she’s just like any other female character, i.e. pretty? 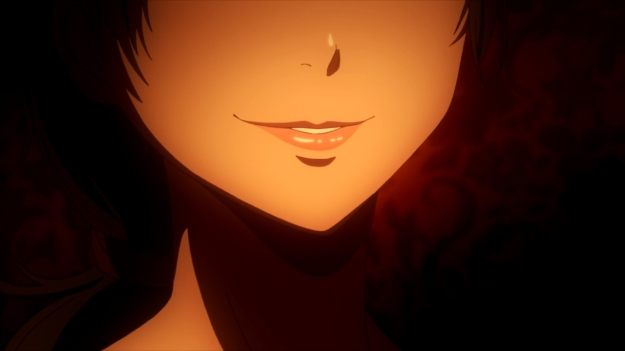