But I’m not actually blue this week. After all, who can be sad after a nice, relaxing three-day weekend? Even though I have work tomorrow, it’s a shortened week, too. It’s the little things in life. And it looks like July 4th will be another three-day weekend. Hopefully, we’ll have some interesting summer shows to watch by then. But if not, that’s fine too. I’ll just work on my other project… 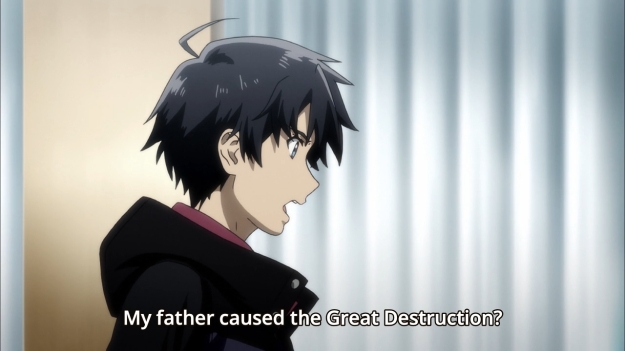 Uh, so who is actually responsible for the Great Destruction? We were initially led to believe that Eiji was responsible, but now everyone’s saying his father is the true culprit. Or rather, his father created the system, i.e. Daisy, that allowed Eiji to cause the Great Destruction, because… because what? Why would you want to destroy the world? What’s the point? I’m asking because apparently Eiji’s father wants to create a second one. A better one. One that will finish the job. As a result, he kidnaps Sena, his own stepdaughter, to lure Eiji out. According to Hiiragi, the only reason they want to dominate the world is to prevent this from happening again. Hoo boy.

This week, we learn a thing or two about Hiiragi, but it’s nothing special. He and Eiji’s father used to work at a lab where they tried to turn people’s thoughts into energy. As you can probably tell, this technology is the precursor to Daisy. Oh yeah, Daisy is actually an acronym… if you cared. Anyway, it turns out Eiji’s memories have been tampered with, so he doesn’t even remember anything about his old man. It wouldn’t even surprise me if his memories of causing the Great Destruction are false as well. Hell, wouldn’t it be hilarious if she’s the one who fucked everything up instead? Actually, no, that would just be stupid. 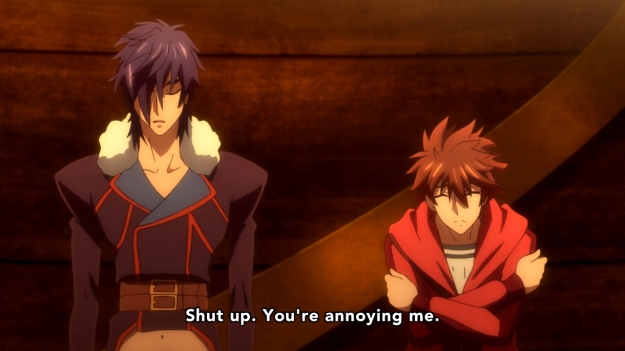 A problem with these two-cour series is that we often have to find ways in order to kill time. Few shows are actually capable of drafting 24 to 26 episodes without resorting to pointless side stories and/or filler episodes. For a forgettable anime like Endride, this means flashbacks, flashbacks, and more flashbacks. Who are we learning about this week! Oh, it’s Alicia. She seems nice enough and everything, but at the same time, isn’t the girl rather superfluous? Why is she even traveling with these guys? She doesn’t seem like a revolutionary, nor does she approve of Emilio’s quest for revenge. It just seems like Alicia’s sticking around because we need to fill some sort of female quotient. I mean, she’s not even a love interest. We all know Shun and Emilio are gonna bang, so… yeah.

Anyway, boo hoo, she has no family. Super sad. During a trek through some snowy mountains, Eljuia falls into a crevice and into some icy cavern. When the rest of the group tries to rescue him. they run into a bunch of scary ice dragons! Oh no, what do we do! All of a sudden, Falarion, Alicia’s cute mini-dragon pet, turns into a fire dragon and protects Alicia. Wait, it gets better! It turns around and starts talking to its owner. Falarion is actually a living Warp Drive! Wait, no, Falarion is actually… DING DING DING, her long lost father! One day, her mother was killed by bandits, so her father ditched her to go on his own sad, pathetic revenge quest. After killing said bandits, he got sucked into his own Warp Drive, which is now some cute dragon thingie. Yeah.

So this entire time, whenever Alicia was petting or playing with Falarion, she was really playing with her dad. But it’s okay! His consciousness only emerges when she’s in actual danger! Totally not awkward at all. And how did he even find his way back to the girl? Maybe this was shown in a previous episode, and I just wasn’t paying attention. Ah well. And I’m amazed how the girl feels no anger or resentment whatsoever. She was left to fend for herself, but it’s cool. All’s well that ends well. 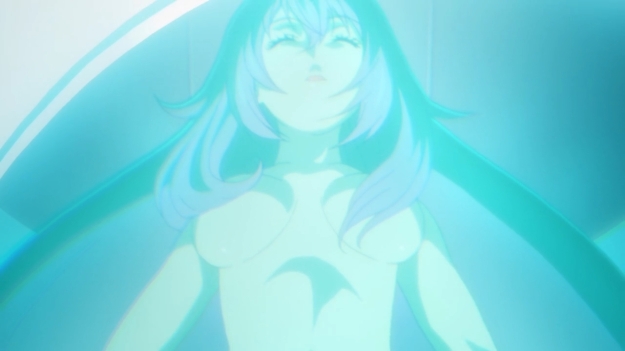 Y’know, I don’t… I don’t even know what to talk about when it comes to this anime anymore. Julis helps Ayato evolve his Ser-veresta, and with it, he defeats the big, giant robot. The end. Wait, no, we still have half an episode left to go. Wait, half? Yep, the second half of this week’s episode is just one boring denouement where nothing really happens. The characters just go around patting cute girls on the head. Shit, I’ve been on this planet for quite some time now, and I’ve never patted a girl on a head. Just my cat’s head. Am I missing out? Is this some sort of transcendent experience? Anyway, the hero’s dumb sister is naked and imprisoned in some creepy dude’s basement… or not a basement. I don’t care. This is the worst show of the bunch. The true nadir of the season (only because I’m not watching the rest of the rejects).

First, we battle the Hunters, but it’s okay. These bad guys aren’t really all that bad. After all, they have a tragic past, so we can go easy on them. Something about being child slaves… y’know, adult slaves are far more productive. Just a tip. Anyway, Hayato goes on a rant about how he wants to create a world where people can smile. Brave. Truly courageous. I’ve never heard an anime hero utter such an audacious wish before.

Out of nowhere, a new type of Savage shows up, and it threatens to kill everyone with its super powerful laser. Man, it’s a good thing anime lasers always take a long time to power up! Otherwise, we’d really be screwed! Unfortunately for our heroes, there’s a convenient barrier protecting the Savage from their attacks. If only there was a way for someone — someone like Claire — power up as well… oh that’s right, you just have to infect people with a virus that is transmitted through bodily fluids! Wait a minute…

So Hayato and Claire make out much to Emilia’s chagrin, and this somehow allows the rest of the group to overcome the Savage’s barrier. I guess you really only need Claire to be powerful. The rest of them can go fuck themselves. With the barrier down, the harem lead then flies in for the finishing blow, but the resulting explosion sends him into the briny deep. Emilia dives in immediately to rescue her boy toy, and hey, fair’s fair. She, too, gets to kiss the bastard if Claire is allowed to. Personally, I’m not one for sloppy seconds, but haremettes kinda have to get used to this sort of thing. And with that, the episode is over. These shows are so exciting, aren’t they? Yep, that’s it. That’s why I’m left speechless after every episode. Still, Hayato gets more action in a single episode than Ayato ever would in two whole seasons. Maybe that’s why he gets an extra letter to his name.

So Nishimura gets his account phished at the worst possible time, and as result, his online waifu ends up having cybersex with some random dude. Nah, the anime would never go there. Instead, the bad guy is too dumb to even fake it. He just outright asks the girl for nudes, so she realizes right away that she isn’t talking to Rusian. Actually, the whole set-up makes no sense. It’s 2016. Why are you guys still typing shit to each other through the in-game chat? What happened to VOIP? Even better, our dorky hero apparently has no other way to message the girl. He has to quickly run to her room, pound on her door, and literally tell her in person that the online Rusian is an imposter. Right.

Anyway, the bad guy deletes all of Nishimura’s characters, and sells his items for good measure. The rest of the episode involves our group of MMO friends working day and night to help the guy get his stuff back. Eventually, the game’s admins will restore Rusian, but apparently, they can’t do the same for his items? Whatever. Nishimura and friends also hatch this incredibly convoluted plan to entrap the bad guy. This involves, again, working day and night in order to create a blog with three years worth of fake posts in order to trick the perpetrator. All just for some shitty online items.

Yeah, yeah, I get it. You have to grind for stuff in an MMO, so you develop a personal attachment. Hey, I’ve been a hardcore MMO gamer before. I can’t say, however, that I would’ve gone this far just to get some digital items back. After all, MMOs come and go. A family heirloom that’s been passed down through multiple generations is one thing. A digital item in a game that might not even be around in a year or two is not worth fighting for. But hey, that’s just me. For Nishimura and his girls, maybe they’ll never stop playing Legendary Age.

In the end, since he lost the ring, Nishimura’s in-game marriage to Ako was also annulled. But that’s okay, because they can just remarry. Woo. 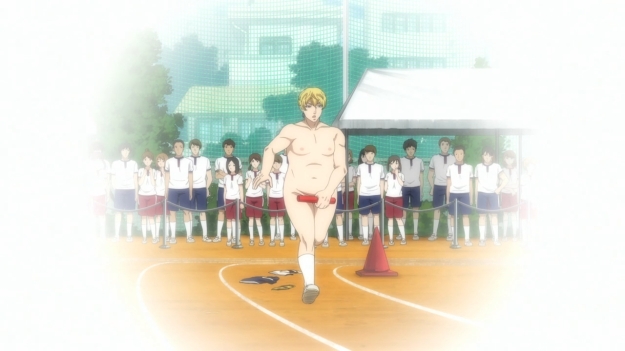 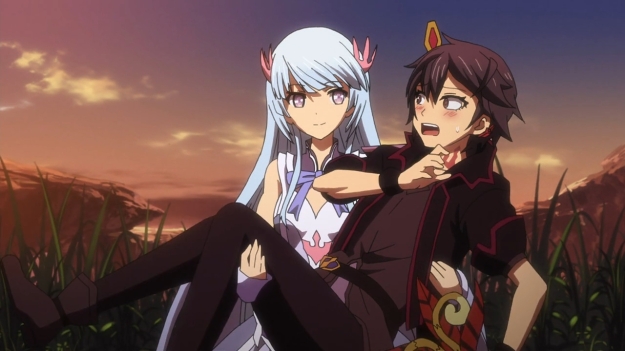 Unfortunately, Giruu isn’t dead. He just needs some really rare and expensive herb in order to heal in his injuries, so it’s time for another generic RPG-ish quest. Hiiro and Soraato go off on their own to fetch this plant. They end up in some strange area where everything, from the grass to the animals, are 100 times bigger than them. In the end, our hero manages to summon his inner Super Mario Bros. 2 and pull the lodged plant out of some giant tortoise’s back. This makes Soraato laugh, which is apparently as equally rare as the plant they’re after. Meanwhile, Erin, Palpa and Tomitte discuss the the looming threat of a continent-wide war thanks to Nambuuko’s arms-dealing shenanigans. In the end, Giruu is all healed up, and the group pay Master Theo a visit. This weird-looking old man not only knows Soraato, but he will supposedly teach Hiiro to be useful. But considering his weak pull-out game, I’m not expecting the kid to learn much.

All in all, it’s an unremarkable episode. I’m starting to wonder how this is all going to wrap itself up. It’s already the ninth episode, and we don’t seem to be anywhere near the finish line. At the same time, however, I don’t recall hearing that this show would carry over to the fall. I mean, who on earth would be dumb enough to greenlight that? It’s a miracle Seisen Cerberus got adapted in the first place.

By the way, Boku no Hero Academia won last week’s poll, so that’s the show I’m gonna cover. You’ll notice, however, its conspicuous absence from this week’s Monday Blues. That’s because I have nine episodes to watch, and I haven’t finished them yet. But don’t worry, I’ll be caught up by next week’s post. Anyway, the summer season is coming up. What are you guys looking forward to? Personally, I haven’t seen anything that I absolutely want to write about.