Alright, here’s the only post of the day. Get out your tissue boxes, people. It’s Kiznaiver time.

— It’s the end of the summer, and Katsuhira’s face is healing up rather nicely. Unfortunately, the same cannot be said for the rest of the group. Only Hisomu has come to visit our emotionless hero, which means Chidori has stopped being the dutiful waifu. Essentially, to avoid their thoughts and feelings ever being shared again, the group has decided to cut contact with each other completely. Well, that’s one way to achieve world peace. If we just keep to ourselves, then there will be no conflicts.

— Class eventually resumes, and Yamada cruelly trips Tenga to show the rest of the Kiznaivers that their pain and feelings are no longer linked. Nevertheless, Maki insists on maintaining her distance from Yuta. Chidori alternates between being pissed off and sad. Man. Man oh man… Personally, I like closure, so I could never tolerate what these kids are doing. If I were in, say, Chidori’s shoes, I would’ve tried to tell Katsuhira how I felt a second time, then let the chips fall where they may. If he accepts my feelings, great! If not, move on. After all, she still hasn’t really told him how she feels. Yeah, everyone knows she likes him, but that’s not enough. She needs to tell him what she wants, and what he can do about it. As you’ll recall, this conversation was cut short during that stormy night, and it doesn’t appear as though they’ve talked about it since then. So she’s just been stewing in her shitty, negative feelings for the rest of the summer. How can anyone live with that? How can anyone choose to mire themselves in such uncertainty? I’d rather rip the bandaid off immediately than go through nights with that sinking feeling in my stomach over and over. Hey, I know what unrequited love is like. It’s not fun.

— Fittingly enough, the three oddest members of the group are the quickest to, well, get over themselves. Nico confesses to Katsuhira and Hisomu that despite everything, she still had a ton of fun over the summer. As a result, she wants them to remain friends. She’s right, of course. Without each other, they’re just a collection of isolated individuals. Yuta’s the only one who can claim to have had friends, but those were just sycophantic girls. For the most part, they all appear to be loners. And the way I see it, they really need to suck it up and stop pitying themselves. I’m sorry, but nothing these kids have gone through is, in my mind, particularly traumatic.

There were some slightly painful moments, and things got a little awkward, but nothing major enough to act the way they’ve been acting. Really, they’re acting like a bunch of spoiled, entitled kids. After ten weeks, the only incident that has made me think, “Well, that really sucks,” was sorta/kinda/maybe Maki’s story with her terminal friend. That’s the only one that should leave major psychological scars on a person’s heart. So what are these kids getting so worked up about? You’re not gonna talk to your friends, ’cause you’re afraid to feel pain? How selfish is that? They’re not being abused. They’re not being exploited. These is just anime friendships gone wrong. Boo fucking hoo.

— I’m guessing Nico went to these two first, because she knew they’d be receptive. The other three may seem to be the most normal on the surface, but maybe that’s the problem.

— It’s funny how Hisomu was first introduced to the story as a hot guy, but he looks particularly ghoulish nowadays.

— Elsewhere, Noriko meets with the mayor, and the latter tells her that they have to shut down the lab in order to avoid arousing suspicion from the government. We’ll find out later in this episode why this scene is particularly problematic for Noriko. In any case, she goes to the roof and acts as though she’s going to jump from a ledge. All of a sudden, Katsuhira collapses to the ground, because he and Noriko are still connected. He quickly rushes to the secret underground tunnel to see if the girl is okay.

— Hisomu and Nico are along for the ride, ’cause why not? What else are they gonna do? Katsuhira bumps into Urushi, and she assures our hero that Noriko’s fine. She merely fell unconscious on that ledge, and she’s currently sleeping somewhere within the lab. More importantly, it’s now exposition time. Time for the story to spill the beans.

— Okay, okay, we already know the basics. A bunch of young kids were gathered for the Kizna experiment. The original idea was to split sensations equally between nineteen children, so no one would be overwhelmed if something particularly traumatic happened to them. Naturally, the experiment went wrong. In two ways, even! First, instead of feelings and sensations being divided up equally among the nineteen children, they all went to Noriko. Whoops! She regularly takes shots in order to, I imagine, deaden her senses, ’cause even to this day, she’s still feeling the other kids’ sensations. Eh, I guess that’s one way to explain the Rei-type characters. Secondly, the other kids’ feelings and sensations weren’t just being lessened. Some of them lost their sensations completely! Double whoops! Some kids still managed to retain some human characteristics, so they were released back to the wild. Like Katsuhira. But what about the kids who lost their feelings and sensations completely? Well…

— In the middle of all of this, there’s a short interlude involving Chidori and Tenga. The latter wants the former to reject him officially. Kinda echoing what I suggested above. In response, Chidori ups the drama even more, and uggggggh… just get me back to the Kizna experiment. Forget these two. I don’t care about them.

— Katsuhira rushes out to the old playground that the nineteen kids used to share. There, he finds five former friends. They appear on the surface to be humans with human flesh, human hair, so on and so forth. But they have no thoughts, no expressions, no emotions. no anything. They’re like human-looking machines. It’s really the first surreal moment of the entire anime since the very first episode when Katsuhira was being rolled through a hospital on a gurney by the Gomorins. Seeing the tragedy of the Kizna experiment right before him, Katsuhira breaks out in tears. I rather like this scene. And with that, the episode comes to an end.

— But man, is this a companion piece to Mayoiga or what? What is with Mari Okada this season? She seems rather fixated on this idea of people losing their feelings and thus losing, in Mayoiga’s words, “their sense of self.” In fact, do you guys remember that M3 the Dark Metal anime? I’ve forgotten much about the story, but the final conflict in the anime revolved around whether or not humanity should be united as one in order for people to understand each other. Okada is double-dipping on us. 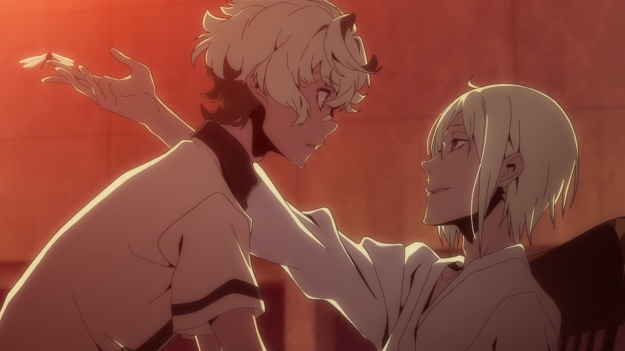 — So what is the Kizna experiment really up to nowadays? I’m guessing (or hoping) that Noriko is still trying to save these five broken kids. That if our seven friends can share their feelings and sensations with each other, then maybe Noriko can give her five former friends (and Katsuhira as well) their humanity back. But of course, the mayor and his city is still trying to protect itself. After all, imagine the outcry if this ever got leaked to the rest of the world. Not only that, weren’t there talks of investors? So there are still people out there interested in the results of this irresponsible, immoral research.

— Not everything can be done in the name of science. Even in our own mundane, non-anime world, there are a slew of untouched experiments that would yield a bounty of useful data. They remain untouched, because you can’t just do whatever you want just for the sake of science. I remember reading about World War II POWs. The Japanese army committed atrocious war crimes in the name of science. Rather than have me butcher the information, you can read all about it here. So yeah, before anyone suggests that the Kizna experiment was worth trying despite what happened, I’m just gonna have to shut that idea down.

— At the same time, what they’re doing with our seven Kiznaivers is also unethical. Even if the results of these experiments can save those five kids, is it the right thing to do?

— So in the end, it was kinda slimy for the mayor to claim that they all think of Noriko as their daughter, wasn’t it? Oh, he won’t ever abandon Noriko, won’t he? Isn’t that a nice sentiment after you’ve practically killed five kids, and mentally tortured one for the majority of her waking life?

— So was this a good episode? Eh. I don’t like the storytelling structure. I don’t like episodes where we just sit down and learn “the truth of it all” in one big chunk. I think there are better, more organic ways Okada could’ve approached this. She did the same thing in Mayoiga, too.