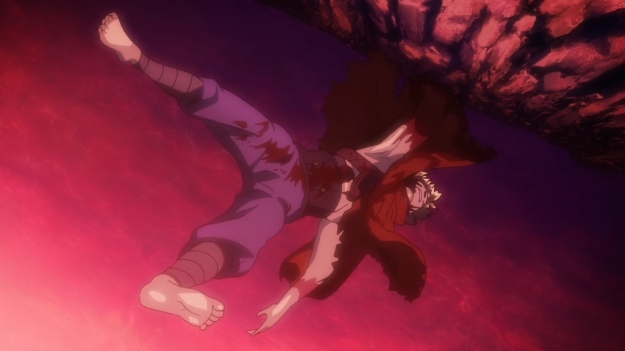 I can’t find any particular topic worth expanding upon, so I’ll just do quick thoughts and impressions this week. Of course, Kabaneri of the Iron Fortress isn’t without its flaws. It has plenty of flaws, in fact. By itself, the plot is really quite silly. The scene where everyone tried to prevent the train from flipping is a perfect example of what I’m talking about. At first glance, it looks like a cool scene, but it’s really quite stupid if you even have the most basic understanding of physics. It’s something you might find out of a brainless action movie. Nevertheless, I enjoy the show for its character drama. Yes, there is character drama. Personally, I find these characters interesting, and I like taking a closer look at their inner psyche. As a result, the silly zombie shenanigans don’t really bother me as much as it seems to bother everyone else. But this leads me to my next point: this episode is particularly low on character drama in my opinion, so there isn’t much for me to analyze. Mostly, it’s just moving the plot along, and well, this isn’t really the anime’s strong suit.

Alright, here are the notes I took as I watched the episode:

— What’s with the trippy sky?

— Biba and his army has taken everyone on the Koutetsujyo prisoner, because he needs their blood. After all, he’s hauling around a buttload of Kabane, and those Kabane need sustenance, I guess. That makes sense on one level, but that raises another question: what happens if the Kabane manage to wipe out humanity? Can they survive off of anything besides human blood? We humans are quite adaptable. We’re omnivores, but if we could no longer eat meat, we’d still survive. What’s to become of this world if humanity doesn’t succeed in fending off their zombie attackers?

— Sukari appears to be working for the other side, but he seems so disappointed by Yukina’s look of disgust. I can’t help but imagine he’s still working for his friends in secret.

— Some poor guy offers up more of his blood as long as they don’t draw any from his wife. As a result, one of Biba’s men simply lops off the poor guy’s left arm. Well, that’s just dumb. Now the blood is all over the floor.

— Elsewhere, Biba reveals his motivations to Ayame. Ten years ago, a 12-year-old Biba — yes, he was twelve — led hundreds of thousands of men against the Kabane. The campaign was initially successful, but eventually, supplies stopped reaching the front lines, and Biba could do nothing but watch his men die. A burning hatred for his father has been growing in his heart ever since, and he’s hellbent on getting his revenge. Okay, that’s fine and dandy, but why is this guy only 22? Why does anime insist on keeping its characters so young? I can sorta understand it when the protagonists are kids, because hey, you want the audience to identify with and relate to the heroes. But there’s no strong, compelling reason for Biba to be this young. For example, he could’ve been 32 instead! That’d make him a 22-year-old commander, and no one would raise an eyebrow. Plus, no 12-year-old looks like this. C’mon.

— Speaking of Kurusu, if he’s still alive, he’s gotta way, way behind everyone by now, right? They’ve been riding this train for how long now? Even if Kurusu followed them, he can’t move anywhere near as fast as a train. I still get the feeling, however, that he’ll have a role to play in the episodes to come, so it’ll be interesting to see how the anime explains his reappearance. 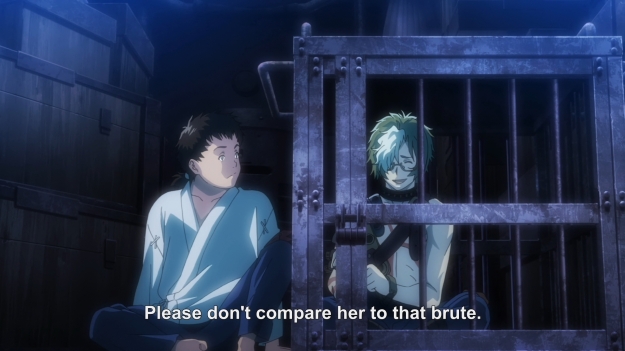 — I’d prefer it if Ikoma could just convince Mumei to come to their side instead of this whole “I’m bringing her back whether she wants to come or not.” Dude, chill. It’s not like she’s your sister or anything, and even then… Also, this whole scene is kinda basic. Takumi asks if Mumei resembles Hatsune, Ikoma’s sister. This is a connection we’ve already established weeks ago. Ikoma tries to deny any similarity, but his friend only gives him a skeptical look. Our hero then says that a voice is telling him to save Mumei, but he has no clue where that voice is coming from! Is it… is it God? Takumi simply goes, “Uh, dude, it’s you. You’re telling yourself that.” So Ikoma replies, “Oh lol yeah it’s me.” Yeah, I rolled my eyes at this scene. It has no subtlety whatsoever.

— Mumei is still trying to come to grips with the fact that her onii-sama is just a straight up oni. He reaches out to the girl with one hand, but she cowers from his touch. She nevertheless believes him when he claims that he won’t harm anyone on the Koutetsujyo as long as they remain peaceful. I mean, you can call the girl dumb, but we’ve been over this before. She’s an emotionally manipulated orphan, so what do you expect from her? As she leaves the room, Biba even mentions that the girl needs “very serious repairs.” In other words, she’s akin to a robot in his eyes, and she’s malfunctioning. They’re going to have to “reprogram” the girl to get her to be obedient again.

— Look at all these people gathered ’round Ikoma’s cage. I’m surprised that the guards even allow anyone to go near Ikoma.

— So the good guys hatch a plan to try and take over the train. Steam, you guys… steam is the answer to all our problems. And still shots. Don’t forget them.

— Ikoma goes after one particular guard for his set of keys. Um, the keys all look the same to me.

— Oh, there you go… Sukari never betrayed anyone after all.

— According to that same asshole soldier from earlier, a male Kabaneri is rare. Why? So far, I’ve only been operating under the assumption that Biba preferred to target young girls. Why? Maybe they’re easier for him to manipulate or something. Nevertheless, there seems to be a “scientific” reason why male Kabaneri are rare. Ikoma never underwent any sort of operation, though. He simply stopped the virus from reaching his brain during the initial infection, and supposedly, that did the trick. Maybe male Kabaneri can only be created au naturale.

— I know Ikoma told everyone that he’d take this guy on by himself, but that doesn’t mean they should just stand there and listen to him. I mean, what a waste of time. You can’t sit here and watch two people duel.

— Ikoma just knows the exact key to use for each car.

— Word of the uprising reaches Biba, and he tries to manipulate Mumei once more into doing his bidding. This time, however, the girl refuses, because her ties to the Koutetsujyo are too strong. Way to go, Ikoma. Way to get the girl’s hopes up.

— Man, check out that look of disdain and hate on Biba’s face.

— Mumei tries to fight her way free, but it seems as though Biba had limited her blood dosage. As a result, she collapses to the ground even though she hasn’t even been fighting for more than a minute. I’m just wondering why the girl didn’t notice that her blood dosage had been lowered. I guess you can only chalk it up to her being too trusting again. 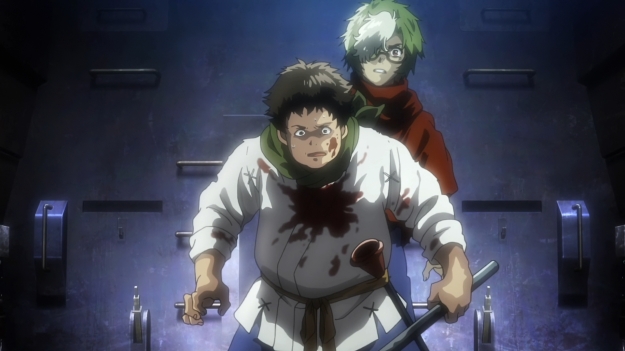 — Eventually, Ikoma and Takuma reach the end of the line, or rather, the keys stop working. Biba then shows up with his men, and he reveals that in typical villain fashion he had seen this coming. Yes, he predicted it all! Not only did he know Ikoma would lead a revolt, it would happen on this exact day! That’s why he had one of keys swapped out! Man, what a genius! But if he knew the revolt was coming, why not just… prevent the revolt from happening in the first place? Like, I dunno, prevent Ikoma from communicating with his friends and allies? Give Ikoma a low enough blood dosage that he can barely fight even if he is still alive? I mean, if Biba’s such a genius, he could’ve just prevented this whole mess from happening in the first place.

— Biba takes aim, then fires a shot. Bam, Takumi somehow shimmied in front of Ikoma despite Ikoma’s superior Kabaneri reflexes. Our best bro is down for the count.

— Actually, let me first cry and get some words in before I really die.

— This entire time, Biba and his men are watching this tragic moment unfold, because apparently, our villain is gauging Ikoma’s reaction. If Ikoma had said the right words or whatever, Biba might have recruited him. But alas, Ikoma is a goody-two-shoes.

— In his blind rage, Ikoma charges wildly at Biba, and loses his right arm in the process. Yeah, there’s no getting that back…

— Even better, a now brainwashed Mumei stabs Ikoma right through the gut. It looks as though she missed his heart, however, so tsk tsk… she’s not a very good assassin.

— Plus, the train car is conveniently open for Ikoma’s “lifeless” body to tumble out. Again, Biba is super smart, and he even commands Mumei to kill our hero, but even so, making sure Ikoma is truly, truly dead isn’t, well, something a genius is capable of, I guess.

— With his last remaining ounce of energy, a dying Takumi reaches out and picks up that precious stone that fallen from Ikoma’s possession. So what’s to become of our best bro? Is he going to die? If so, what’s the point of him picking up the stone? Either he survives somehow, or they stupidly keep his body somewhere safe, and Ikoma can thus return and retrieve that precious stone. Either option seems silly to me. Or Takumi’s body can be dumped off the side of the train, and we never see the stone again, but I doubt that’s going to happen…

Anyways, that’s that. We moved the plot along, but without the strong character drama to prop it up, the show’s flaws are too difficult to ignore. This is probably Kabaneri of the Iron Fortress’s weakest episode yet.

10 thoughts on “Kabaneri of the Iron Fortress Ep. 10: Do the locomotion”