They say a 7-game series doesn’t really kick-off until a team loses a home game. The same sort of logic applies here: an Re:Zero arc never fully starts unless Subaru dies. And until then, I’m just horribly, horribly bored. But enough chit-chat. Let’s get started.

— The episode starts off with Subaru and Emilia’s supposed “date.” Despite the guy droning on and on about how much he adores Emilia, when push comes to shove, nothing remotely romantic ever happens. It figures. This is anime, after all. He only knows how to chase, and the girl only knows how to act coy. The bland lead wouldn’t know what to do with himself if he ever did get the girl.

— This guy has only one outfit to wear, huh?

— I like how Subaru is recapping the events from the previous arc as if the audience has already forgotten what happened.

— When they return to the castle after their short-lived “date,” there’s a carriage out front. An emissary has arrived from the capital, and Emilia has some very important matters to discuss. On the other hand, we get to watch Subaru share fancy tea with the carriage driver. Riveting. 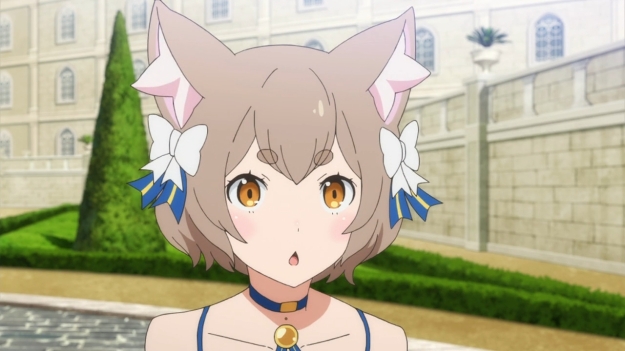 — Oh hey, it’s a new character. His name is Felix, by the way. Yes, it’s a he. What? Because of his outfit? Just because the character is wearing a choker, a ridiculous bow on the back, spaghetti straps, and a dress, you think it’s a she?! Ugh. You people are such bigots!

— I really dislike how these scenes are composed. They’re so flat and boring. Then to top it all off, Subaru is an idiot even with complete strangers.

— Emilia needs to head to the capital for some official royal selection business. She wants to keep Subaru uninvolved for a couple reasons. First, it doesn’t really concern him. They haven’t really known each other all that long. Secondly, he apparently hasn’t fully healed up from the mabeast attacks yet. Nevertheless, Subaru convinces the girl to let him accompany her to the castle so he can see some old faces. She’s so naive that she buys it.

— Rem has gone full deredere. I was never really a fan of her character, but she’s completely lost any spunk she used to have. That is why relationships rarely come to fruition in anime. The girl just loses all personality when she falls in love. These writers just don’t know what to do with these girls.

— Elsewhere, Felix is surprised that carriage driver dude even bothered to talk to Subaru. According to the latter, however, Subaru has “the eyes of one who has experienced death several times.” Um… sure…

— When Emilia and Subaru get to the capital, our hero wants the girl to stop holding his hand. She doesn’t want him to get in trouble, but she also makes another good point: he wanted to hold her hand on the date, so what’s the problem now? Subaru replies that he’s not currently physically and mentally prepared for them to hold hands. Good lord.

— Oh good, we meet the produce vendor. I totally wanted to catch up with him.

— Subaru and Emilia stop by a guard station where some purple-haired knight greets the girl with a kiss on her hand. Naturally, this sends Subaru into a rage. He’s not mentally prepared to hold her hand, but he gets worked up about this.

— Nevertheless, Emilia commands him to stand outside like the servant that he is. In the distance, he spots a pretty girl walking into a dark alleyway. Well gosh, isn’t that just the most inviting thing ever to our hero? 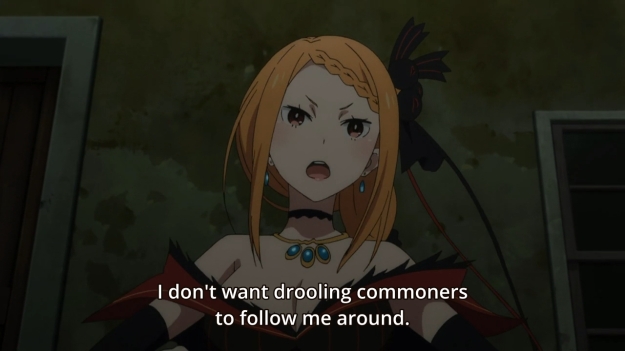 — So we get to catch up with these dorks again… and finally, Old Man Rom. See, we’re setting up the story for the new arc, so it’s okay if you’re bored. It’s okay if we trot out old, familiar faces just for the sake of it.

— But hey, new girl! Her name is Priscilla, and for now, she’s got a bit of an attitude. Either she keeps it and dies later on in the story, or falls in love with Subaru and becomes another pathetic puddle of deredere mess. In any case, it’s a new arc, so we get new cute characters to drool over! After all, we’re done with Rem. She’s been conquered. It’s time to move on. Emilia is not exactly thrilled to see the girl. It’s obvious that this girl is also contending for the throne.

— Eventually, Emilia finds our hero, and she’s followed by a guy who looks like he just stepped out of a high-level Dark Souls run. Again, Subaru is possessive, and it’s odd how she never reacts to any of this. Emilia isn’t much of a fleshed out character. She’s blissfully mute or dumb during these moments. It’s like she’s not even there.

— There’s some weird exchange about the apples in Subaru’s possession. For some reason, the new girl thinks they’re not apples, so Subaru gives her one. Great…

— When they’re finally alone again, Emilia asks Subaru how he managed to meet the new girl. Normally, when you care about someone, you’re also able to read that person’s body language. Emilia not only sounds concerned, she looks concerned. She looks stressed and worried. This is clearly a very important topic for her. Nevertheless, Subaru cracks dumb fucking jokes about how she’s possibly jealous that he’s with another woman. It must be frustrating to talk to someone who has to make light of everything. But again, Emilia isn’t actually a real girl or anything. Otherwise, she’d tell him to cut his shit out. Since she’s nothing more than a haremette, however, she drops the issue entirely when he goes, “H-huh?” Emilia-tan, why the serious face?” Yeah, man, why are you so serious? You’re only here on very important business, and there are people threatening to kill. So can you just chillax and stop PMSing?!

— Later, Emilia tells Subaru that she has to leave for the castle, but she doesn’t want Subaru to come along for the same reasons as before. He initially promises that he’ll behave, but once she leaves, he confesses to Rem that he wants to be with Emilia “when important things are going on.” Dude, why wouldn’t you just say this to the girl? Why do you wait till she’s gone to actually be serious? Fucking anime leads, man.

— So Subaru has to find his way into the castle. Luckily for him, Priscilla’s carriage just happens to be driving by, and she’s more than willing to give him a lift. Oh, she’s only just met him, and he looks like nothing more than a simpleton, but she’s confident his presence will make things very interesting at the castle.

— When our hero gets to the castle, Emilia is predictably shocked to see him. After all, he made a promise to her. In response, Subaru does and says nothing. Uh, did he even think this through? Did he not consider what he was gonna say when he saw her?

— Priscilla amuses herself even further by referring to Subaru as her manservant. Subaru tells her not to give Emilia the wrong idea, but I think he’s the one who gave her the wrong idea…

— Emilia even asks him directly why he came. He can only give her a slack-jawed stare. He barely knows her, he’s afraid to hold her hand in public, he can’t read her body language, he breaks his promise with her, so on and so forth. What a man.

— By the way, the contenders for the throne are all girls. That’s because a stupid slab has been engraved with prophecies, and it states that one of these girls will become the dragon’s priestess. How neat.

— We also catch up with Reinhardt and Felix. Ho-hum.

— Oh yeah, there’s supposed to be five contenders to the throne. Reinhardt steps forward and announces that he’s completed his mission in locating the fifth girl! All of a sudden, in walks Felt!

— And that is that. The episode is over, and nobody died. Yawn. Wake me up when Subaru is in tears and bleeding his guts out.