Well, this is an intriguing show. So much about the story is still shrouded in mystery, so I’ll just jot down some loose thoughts instead:

— So the previous world (Earth?) was ravaged by six meteors, and life retreated to the sea. Even then, the origin story resembles an egg being fertilized. You even have life emerging from the water.

— It barely looks as though there’s much land left. All we get to see is this tiny island surrounded by an infinite expanse of ocean. There must have been humans at some point, though. More on that in a bit.

— At some point, gemstones appeared, and not only that, they have sapience. By the way, sapience is the word you actually want to use. Lots of living things have sentience, since it only denotes the ability to feel. Therefore, my damn cat has sentience. 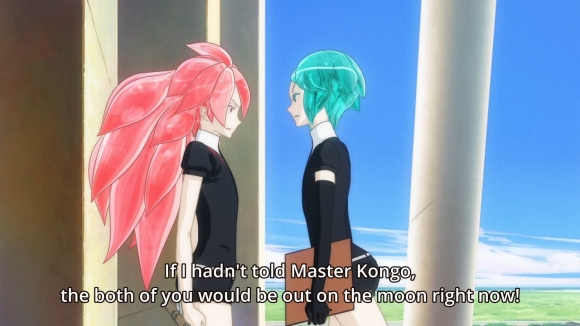 — Since the gemstones appear to be sexless, androgynous lifeforms, I’m going to refer to them with the gender-unspecific pronouns. Sorry for the confusion.

— These sapient gemstones seem to spend the majority of their lives fending off the Lunarians, bad guys who appear to just want the gemstones for nothing more than decoration. Is that really true? It’s too early to tell. I guess we’ll just have to take Master Kongo word for it.

— Speaking of Master Kongo, he appears to be the leader of the gemstones. Yeah, he. Kongo is the only character who isn’t androgynous. Is he a gemstone himself? He lacks their beautiful gem-like hair, but his face might be powdered like everyone else’s. In any case, Kongo spends most of his time meditating. I’m inclined not to trust a bald guy in stories, since they tend to be evil. But who knows? This show borrows a lot from Buddhist imagery, so his baldness probably doesn’t speak to his moral character.

— The Lunarians are all white in appearance. They descend from the sky through “sunspots,” but those just look like Rorschach tests to me. They announce their arrival with flutes and drums before raining arrows down on the gemstones.

— So when the gemstones aren’t on the lookout for the Lunarians, what do they do in their spare time? Learn about the world around them? On the surface, there doesn’t seem to be much to learn. I’m also curious about their culture. They must’ve borrowed it from somewhere. Humans have must have existed at some point. It’s also possible that the 28 gemstones came up with everything — their clothes, their school, etc — all by themselves, but that seems unlikely. 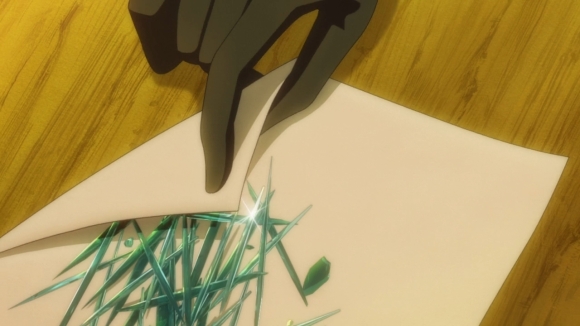 — The gemstones are concerned for their lives, I suppose, but not as concern as you or I would be. If we were constantly besieged by weird moon people who want to harvest our bodies for decoration, we’d be scared shitless. But some of the gemstones almost treat it like a chore. Diamond puts herself and Phos in danger just to test out a new fighting ability. Life and death doesn’t mean much to the gemstones. Actually, it doesn’t seem like the gemstones can die. If you break them, they can just put themselves back together. They speak of Heliodor, a gemstone they had lost to the Lunarians. They don’t seem too bummed out about them, however, because if they recover all of Heliodor’s parts, they can put them back together. The gemstones are essentially immortal then, right?

— Chipping off a part of their body will diminish their memories, which does sound like a scary prospect. Even if our bodies can exist forever, our memories seem innately tied to our personal identity. Wouldn’t that be scary? If you bump into a sharp corner, and lose a small piece of yourself, that could be a small precious memory that is gone forever. That sucks, man. 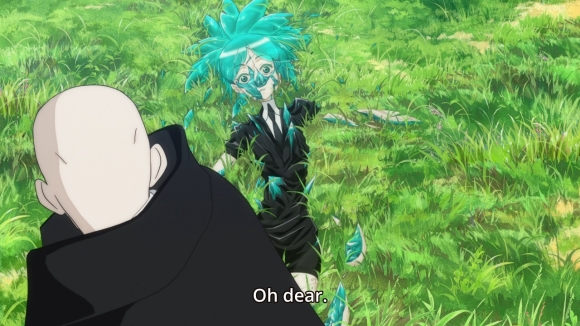 — There are moments that would be considered body horror if the gemstones were made out of flesh. Moments like the good doctor waving dead limbs around, or shattered gemstones in body bags. Or, again, their bodies being broken apart and used as decoration. Or seeing former allies’ bodies used as weapons. Or when Phos is swallowed by a giant snail and finds themself slowly digested. This would be incredibly disturbing to see if not for the fact that these characters are gemstones. Maybe body horror is only horror if we are mortal, because the gemstones seem hardly bothered.

— Oh yeah, let’s not forget the pulsating insides of the snail. It’s worth noting because this is the only instance of any sort of fleshy matter that we’ve seen so far. Again, this would be body horror in any other story…

— The Lunarians don’t appear to want Kongo at all. Well, he’s not very pretty, so he’d make for shitty decoration. But again, it makes me wonder if he’s trustworthy. The gemstones trust him, but they’re all childlike. He is the only adult character I’ve seen so far. The doctor appears adult-like, but they look like the rest. One can be a child and simply put on an act of maturity. The way the doctor toyed with Jade didn’t seem very mature to me anyway.

— There’s interpersonal drama between the gemstones. For instance, Cinnabar is isolated from the rest, because of their poison (read: mercury). As a result, they want to be taken away by the Lunarians, because they feel useless on the surface. In the second episode, we learn that despite Diamond’s radiance and beauty, they feel useless next to Bort (which is apparently a type of imperfect diamond that can’t be used as a gem). But honestly, the character relationships are by far the least interesting thing about this show, which is a bit sad because the drama is the thing that gives these gemstones any sort of humanity. Nevertheless, their issues are unoriginal and trite. Maybe we humans are just walking cliches.

Anyways, that’s all the notes I have on this show. It’s probably the most interesting fall series that I’ve seen thus far? Keep in mind, however, that I still haven’t gotten around to Children of the Whales yet. I’m going to cover that on Tuesday. But back to Houseki no Kuni, I don’t know how a story like this can resolve itself in a satisfying way. Anything can be intriguing at the start when you withhold crucial information from the audience, and force them to speculate. Once they start filling in the holes, however, I find that what we were enamored by was never anything of substance, but just the mystique itself.

This anime has indeed become one of the favorite anime for this season. Unfortunately, I don’t think that this anime is my cup of tea. I want to like it. I really do, but it’s just not working for some reasons.

I already read the manga a few years ago, but I found myself bored reading it. The characters are dull and boring to me and the mere fact that all of them, excluding Kongo and probably the Lunarians I guess, are genderless alone is just not enough to excite me unlike a lot of its fans.

The mysterious world is also not enough to reel me in. I guess if you find the main characters and even the side characters dull and boring, it’s hard to care about the world. The world also doesn’t seem to be that interesting, and it doesn’t help in that matter. I also don’t find the world to be visually appealing. All I can remember about the world from the manga that I read are empty plains and black skies.

I watched the anime, though. The world that I see in the anime is a bit more visually appealing than the one that I read in the manga, but still not enough to reel me in. I guess I’ll skip this anime. However, I’ll still read your posts about it. Who knows? It might get better and more interesting later. Back to Stellaris I guess.

The mystery is really the only thing sustaining this show. The characters are unremarkable. The visuals are bland. Even the combat doesn’t amount to much more than the girls waving their katanas and brushing away swarms of arrows. But sadly, having some mystery is a godsend in a sea of mediocrity.

Seeing people calling this show mediocre just makes me more eager to see the point when they turn their opinion around. I just hope people stay for long enough.

The majority of the characters will remain unremarkable since they’re basically children. The major focuses in the story are on a handful of main characters, Phos in particular who becomes very unlike the other gems.

So you read the manga “a few years ago” as in long before it ever got into the real meat of the plot and Phos’ massive changes as a character?

Yup, the manga that I read a few years ago is dull and boring. The characters and the world are dull and boring. It also doesn’t fare much better in the visual department, the design for all the characters except Kongo are too similar with each other. The fact that all of them also wear the same clothes make it worse. The world is also the same. I only remember empty plains and black skies whenever I try to remember the world the story take place. One of the things that the anime improves on is giving all characters different hair color, making each character easier to stand out from each other (not much, though).

I don’t give a shit about the real meat of the story if the story can’t interest me to read until it picks up. This story asks me to have faith in it without giving me any reason to have faith in it. If it does get better later, then I’ll read it later. If it’s not, then I just read other stories that are able to do both the beginning and the rest right. No harm done.

“The Lunarians don’t appear to want Kongo at all. Well, he’s not very pretty, so he’d make for shitty decoration.”

Ha ha ha ha, that made me laugh my lad, keep em coming!

Anyway I like this show, even the CG looks good, 3D animation fits very well in this setting unlike Berserk =/, I’m eager to know more about this anime and even if it ends up being mediocre at least I’ll know more about gem hardness and properties