I always try to leave the office as soon as I hit the 8-hour mark. Since I’m salaried, it’s not like I’ll even get extra money for sticking around. Sometimes, I cheat and leave a little earlier. Shhh. I thus can’t even begin to fathom the idea of being in the office till midnight. That’s insane. I know some jobs are just that cutthroat. I know Japan has a professional culture where the work-life balance for most corporate employees are extremely lopsided. Still, you gotta draw the line somewhere. I know doctors have to carry pagers, but that’s different. They have lives to save. For the rest of us, our job are never worth such ridiculous hours. As a result, Morioka had a good reason to quit; it’s just that her alternative isn’t much better.

The show still hasn’t really bothered to address how our heroine intends to support herself long-term. I’ve harped on it since the first episode, and well, can you blame me? Every adult has bills to pay. Plus, the show’s called recovery of an MMO Addict. The story absolutely knows poopsocking all day isn’t a good thing. Otherwise, what are we even bothering to recover from? Even if she’s more relaxed now — even if she’s finally forming fulfilling interpersonal relationships — Morioka’s current lifestyle isn’t sustainable. Still, it’s important to see that not all NEETs or hikikomoris are immature rejects who can’t do anything. Morioka was damn good at her job. She just didn’t want to keep living that soul-draining routine. 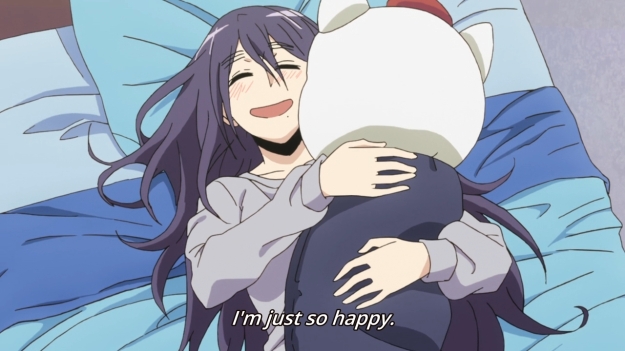 Still, we’re slowly entering dangerous waters. What’s the solution to Morioka’s problems? Win the lottery and keep living the NEET life? I’d love to be able to do that too, but that’s not going to happen. Meet Prince Charming, who will then patiently support her through thick and thin? That’s… probably where we’re headed, but then where does that leave the rest of us? How many of us will be so lucky? I’m not saying it’s impossible to find true love, but to bump into them the moment you log into an MMO is nothing more than a pipe dream. Even if you find someone, they won’t stick around if you have serious issues to work through. For the vast majority of us, the dutiful support remains ever elusive. It’s not a coincidence that healers are so difficult to find in MMOs.

I’ve said it before but Recovery of an MMO Addict is fun for me simply because I can relate to it. It’s a bit nostalgic. But at the moment, the show’s just fluff. It’s a relaxing, feelgood show, but there’s very little meat to dig into. The most glaring issue is that there are no serious negatives to Morioka’s life. There’s no real struggle to any of it. She wakes up and gets to play a game full of friendly, loving guildmates. When she’s hungry, there’s a nearby combini where she can spend her seemingly bottomless source of cash. She even has an admirer in Yuta. I didn’t expect him to have fallen for her so quickly, but the guy is tripping over himself blushing every time he thinks about her. Even better, the clerk at the combii looks like he has a crush on Morioka too! This is not the typical MMO player’s life! 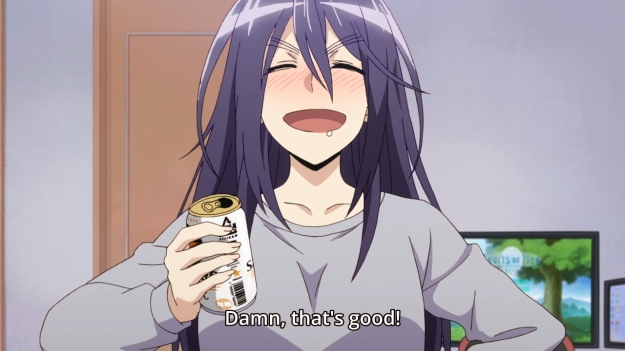 You get up in afternoon and stare at yourself in the mirror. Yeesh, you’re not in great shape. Your hair is getting a bit too long and messy. You check your phone. No messages. You wonder how much longer you can put off doing the laundry. What are you eating tonight? Something easy that won’t take too long to prepare. It’s not healthy, but eh. You put on a TV show you’ve seen a thousand times before, but the noise and banter will fill the dead and empty apartment. You think about filling out another round of applications, but none of the jobs appeal to you. Too many customer support positions. You don’t want to talk to those people. Too many cover letters to bullshit through. You log into the game, but don’t do anything. You’ve done all the quests you care about. The rest is just pointless grinding for cosmetic items. You wonder when your best online friend will log on.

Yeah, Morioka’s life is pretty ideal by comparison. If she has the same issues, we don’t get to see them. Instead, it would appear as though she rolled the NEET dice and somehow landed on a 20. It almost makes you wanna go back and try your luck at being a deadbeat too! Maybe I’ll find my own Lily! But we all know better (I hope). I still honestly hope she gets her Prince Charming. I hope things work out for her and Yuta/Lily. The anime reminds me of better times, after all. But I can’t lie to myself and say that it’s a great show. It’s just a bit too one-dimensional right now. It’s not the end of the world if you become a NEET. That’s important to keep in mind. But it’s also not sunshine and rainbows either. 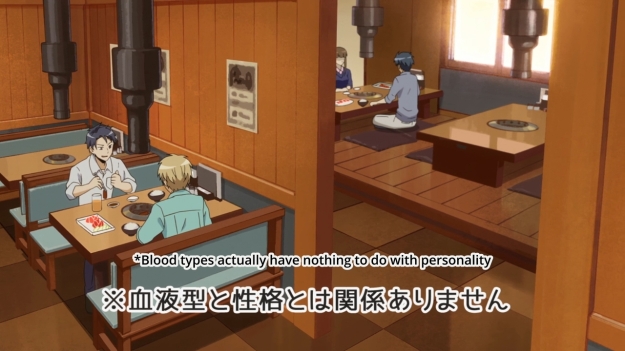 — Seeing Yuta and his friend eat, I really want to get KBBQ, but that costs an arm and a leg around here.

— I didn’t really see a point to the chopsticks scene. I kept thinking it was going to build to some salient point or epiphany about Yuta’s love life, but nope.

— Morioka ends up rejecting Yuta’s offer of dinner, and I’m not surprised. I think it’s a bit too sudden to just invite someone out just because you accidentally knocked them over. Still, it wouldn’t hurt him to keep the channels of communication open. Why not just start off by being a friend?

— Well, at least the girl can down a can of beer.

— We’ve touched on how Morioka is comfortable getting close to a female avatar, but hey, Yuta is really pushing hard to make things official with a male avatar. From a gamer’s perspective, there’s a pretty decent chance that a female avatar is controlled by a guy.

What about a girl controlling a male avatar, though? I bet it’s not quite as high. Yuta either doesn’t really mind because this is all fantasy, or the online relationship is not really as serious to him as it might seem. But this is such a light-hearted anime, so I have a hard time imagining the latter.

— Hayashi balks at Lily’s gift, because he can’t afford to get her something equally expensive in return. That’s why you make something from the heart to win her over. If she’s materialistic and rejects your gift, then you’ll at least know her true colors. Think, man, think!

— It’s interesting to see how Yuta’s coping with his rejection. He put himself out on a limb and offered his company to Morioka only to be shot down. So he now turns to the fantasy world where all your dreams come true. In order to feel fulfilled — to not have his company rejected — he has Lily propose to Hayashi so that they can become MMO official. Would he have done this if Morioka hadn’t rejected him in real life? I think that’s the big question. We’ve all done the same thing. We’ve all given gifts partly because we want to be loved. We want to be praised for the act of giving, which honestly spoils the selflessness of the act.

— I still love Morioka’s idiosyncrasies. Every time she needs to de-stress, she turns to her trusty lint roller. She doesn’t even have a cat.

— People accusing female players of getting too close to the guildmaster sadly happens all too often in MMOs. Guild drama is pretty pathetic, especially when people start being passive aggressive, forming their own cliques, then ultimately disbanding the guild and running off with all the money.

— I don’t know what Morioka is talking about. You can still have crushes at 30.

— I like how they capped off the romantic moment in-game by cutting to Morioka chugging a beer. That’s pretty much how the MMO poopsocking life. No matter how cool you think you look in-game, you’re dressed like a slob and surrounded by junk food.

3 thoughts on “Recovery of an MMO Addict Ep. 3: Semi-charmed life”