So when we last left off, the majority of Falaina’s special forces walked right into an obvious trap and was gunned down by the enemy. Lykos managed to put herself in hiding just in the nick of time, but shortly after watching her newfound friends die en masse, she decides to confront the enemy commander anyway. I don’t understand what she intends to do here. Does she really think she stands a chance against an entire battalion of soldiers all aiming their guns at her? Or does she just want to die? Maybe she can beat them by herself! Because out of nowhere, Ouni appears behind the enemy commander and takes him hostage. H-how? Like I said, they’re literally surrounded on all sides. All sides. Where on earth did he come from? How did nobody manage to stop him? Are these just about the worst soldiers on earth? Ouni then tells Chakuro to take Lykos and complete the mission. But even then, they’re all still surrounded. Someone could simply shoot Ouni in the back without him knowing. Maybe I’m wrong, though. Maybe his special powers allow him to detect any incoming surprise attack or something. As a result, Chakuro and Lykos runs off to face the nous. But hold up, we’re not ready to move forward with the storyline yet. First, an apparition of some pink alien girl will fly at our hero, then it’s time to stall!

We get to see Neri/Ema sing again. It’s the same song, too. Maybe she’s been singing and dancing this entire time. Or maybe no time has passed at all since we last saw her. Nevertheless, we now get to see weird, glowy hands emerge from Falaina and reach out to its inhabitants. Everyone’s nonplussed about it, though. Even the kids are like, “Wow, these hands are so warm!” Bruh, if I saw ghost arms coming out of the walls, I’d be questioning my sanity. I’m not exactly sure what Falaina is trying to do either. Maybe it’s trying to comfort the remaining survivors? On the other hand, Neri/Ema appears to Suou and shows the chieftain a glimpse into the crazy kid’s heart. Oh yeah, crazy kid’s got a name: Liodari. Unlike his peers, the nous couldn’t eat his emotions. Instead, he got backflow. Does that mean he got force-fed regurgitated, partially digested human emotions? In any case, he got the ability to see into people’s hearts afterwards, and in them, he would see fields of flowers. But at the same time, Liodari was ostracized by everyone for being different. He even tried to kill himself by defenestration. Okay, so the kid’s obviously deranged… how did he end up in the military anyway? I thought emotions are prohibited in that society. How come he wasn’t locked away somewhere instead? Or are we doing that thing where we make up rules then come up with exceptions to them on the fly? Maybe the rules were never true in the place. 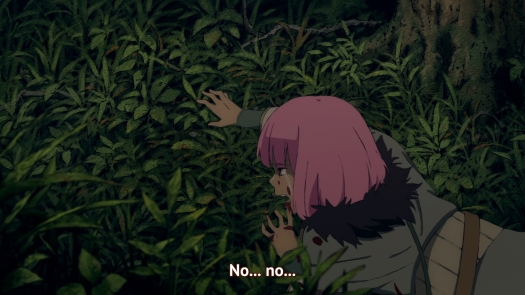 Suou, ever the consummate softie, tackles Liodari from behind and offers him a place on Falaina. ‘Cause, y’know, it’s anime. If you’re an attractive character in anime, you are always, always redeemable in the hero’s eyes. It doesn’t matter how many people Liodari has killed in cold blood. Hell, he’s butchered Suou’s own people, but it’s okay! Luckily, Eyepatch-kun will have none of this. He proceeds to beat the tar out of the crazy kid, because… well shit, man, he’s a murderer. You can’t just say a few nice words and expect the guy to completely change his nature. I wouldn’t kill Liodari, but I’d at least lock him up. Anyway, Eyepatch-kun picks up a sword and gashes the kid’s stomach. Naturally, Liodari is a coward and now afraid to die. He begins to crawl away from the fight pathetically. Eyepatch-kun moves to finish him off for good, but Suou gets in the way: “He can’t do anything now.” H-how can you be so sure?! There are still kids running about on this island! After making his escape, Liodari even swears that he’ll kill everyone on the island. Eventually, Liodari does eventually run into some kids, but they are armed. When he scares them they stick him with arrows, and Liodari is put down for good. Hopefully. I never really liked his character. In fact, I’m not exactly sure what the show is attempting to accomplish here. Am I supposed to feel bad for the guy? I know I’ve been saying how I wanted Children of the Whales to flesh out its villains, but this isn’t the way to do it. They took the most unimaginative, cliched approach possible: crazy kid who had a bad childhood decides to make others suffer. ‘Cause, I dunno, the world and its people are farces or something. It’s about as uninspired as you can get, and even worse, parts of his backstory doesn’t even make sense. Again, if he was so crazy and so broken, why was he even allowed to participate in the military? How was he ever Lykos’s friend?

Can we get back to Chakuro and company yet? No. We instead get a scene with Kicha and the rest of Ouni’s gang. Shikon and Shikoku show up to complain that their leader has abandoned them. In fact, they think he’s just playing lapdog to the Unmarked, and they don’t appreciate that one bit. They think Suou dragged everyone into a war, and they never agreed to fight for the Unmarked. Bro. Bro. What other choice do you have?! Whether they choose to fight or not, the enemy was going to come and slaughter them all anyway. There was literally no other alternative. Literally none. They may as well defend themselves. This whole argument is a waste of time. This whole scene is just an attempt to stall for time, because we’re not ready to return to Skylos. 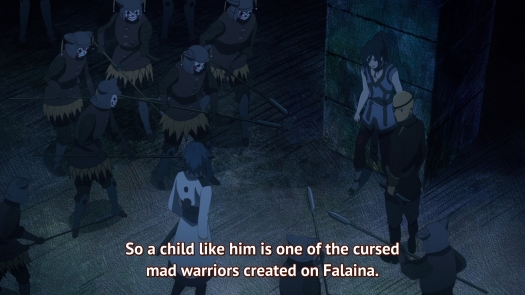 Lo and behold, when the episode is just minutes away from coming to a close, we snap back to Ouni. Remember how I speculated at the start of this post that maybe Ouni has special powers that prevented all those soldiers around him from just shooting him in the back? Like maybe he could see incoming surprise attacks or something. Well, I was wrong. Some guy simply shows up and shoots Ouni in the leg. N…nobody else could’ve done this? But the new intruder has a plot bomb to drop: Ouni is a daimon created on Falaina. By who? Falaina itself? Anyway, I guess that’s why the kid just appeared out of nowhere one day. In fact, Falaina’s inhabitants aren’t sinners because of what their ancestors did. Rather, they’re sinners because of something they have…? How does that make you a sinner? If you just look at the word grammatically, you can make the reasonable deduction that you can only be a sinner if you sin. A driver is a person who drives. A sinner is a person who sins. Makes sense, right? You have to do something sinful in order to be a sinner. You can’t just be a sinner because you have something. I don’t care about the whole “we are born in sin” bullshit. I never bought that logic, and I never will. But fine, I’ll still hear the show out. Go ahead. Tell me why they’re sinners–… ah fuck, the episode just ended. Great. Just great.

7 Replies to “Children of the Whales Ep. 8: I’m exasperated”