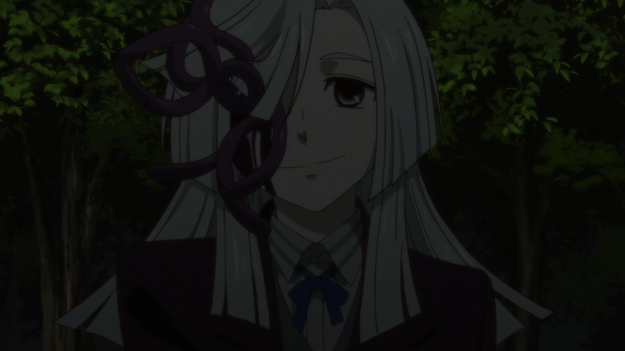 Joseph is apparently also known as Cartaphilus, a.k.a. the Wandering Jew. The legend itself is pretty basic: on the way to his crucifixion, Jesus was taunted by a Jew. So how did the former react? He “cursed [Cartaphilus] so that he can never die.” The Son of God is merciful, isn’t he? Like father, like son. Unlike the others, I’m going to keep calling him Joseph, because it’s important to be respectful. If people want you to call them by a certain name or pronoun, we really should be sensitive to their feelings even if they’re a deranged sorcerer with no conscience. But I digress. I guess we now know why Joseph has been around for such a long time. He literally cannot die. At the same time, however, his body will continue to decompose: “I’m sick of rotting away until an end that I don’t even know will come.” Immortality doesn’t preclude pain, and maybe Joseph’s body suffers much more acutely. And so he wanders and wanders, hoping to one day find a cure to his condition. But everlasting pain has probably short-circuited his brain. At times, the child-like sorcerer seems to forget where he is or what he’s doing. I’d go nuts too if I was hurting everyday. Now imagine living with the fact that it will never go away. Suicide isn’t even an option. The Son of God sure is cruel. In all seriousness, however, we don’t know why this Joseph is cursed with immortality. It could be due to Jesus, but this is also a universe with magic and fairies, so I’m not going to assume the myth that Renfred mentions is automatically true. It’d be kind of weird, anyway.

I must confess, however, that I don’t exactly love the rest of the episode. It’s all over the place. I don’t like doing straightforward recaps, but this is probably the best way to illustrate my issues with the episode. First, Elias goes mad and destroys that preying mantis-looking chimera. No fanciful magical powers here. He appears to rely on nothing but his brute strength. Meanwhile, Dog-kun plants his forehead on the unconscious Chise, which allows the girl to peer into his memories. She sees his former “imouto” and how she was teased for being a redhead. Then she was chased into the streets and ran over by a carriage. Dog-kun stayed by her grave, hoping that she would one day come back to life, but alas… Back in the real world, Dog-kun’s tears falls on Chise and she somehow comes to. How? Why? She feels bad for him, so this… this revives her? We’re going to be here forever if I don’t speed this up, so let’s go. Renfred shows up and plants a bullet through Joseph’s brain. Chise convinces Elias to return to normal. Joseph can’t die, however, so he comes back to life and calls forth another chimera, but this time, the chimera has Dog-kun’s imouto’s upper torso. I don’t like this. Too coincidental. Or did Joseph somehow know about Dog-kun’s past and specifically dug up Isabelle’s body just to be an asshole? Meh. 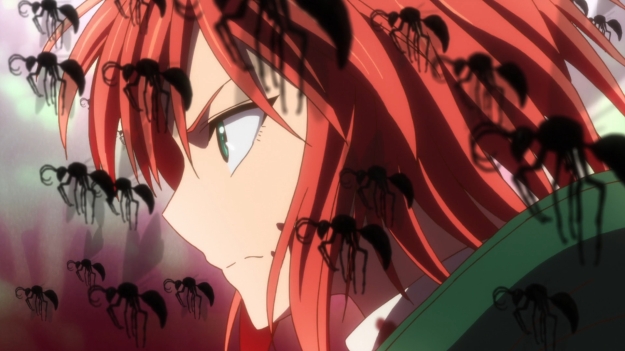 Chise suddenly realizes that Joseph is responsible for the whole cat subplot, so she goes out of control. Somehow, she summons forth a bunch of wasps. This is bad because… something about twisting the rules of nature or whatever. Nothing is really properly explained. Even Elias can’t stop her, because she eats a part of him? Again, nothing is really properly explained. Then out of nowhere, a fairy whisks them all away to safety: “That wretch won’t come looking for us here.” Oh, how nice. While they’re safe, the fairy convinces Dog-kun that he’s, well, a dog. So now, he suddenly wants to become Chise’s familiar. How does he know he can do this, by the way? I guess he just does. But becoming someone’s familiar is oddly very, very intimate. You share everything with them: “Your senses, your emotions, even your time.” Also, if Chise dies, then Dog-kun would die too. Dude, we just met. Isn’t this a little too soon? I simply find it funny that this new character that we barely know is suddenly closer to Chise than Elias. But whatever. Then of course, Joseph tracks them down because… uh, something about strings to Dog-kun. And yes, I know Dog-kun has a name, but he’s about to get another one, so I’m gonna stick to Dog-kun unless he requests otherwise. Speaking of which, he begs Chise to go through with the pact, because he doesn’t want Joseph to take him away. So we get an insert song and everything, because this is such a wonderful, magical moment of when a young girl gains a giant black dog that can turn into a hot dude whenever. It’s like something out of fucking Twilight. Last but not least, Chise gives Dog-kun a new name: Ruth.

So Ruth destroys the chimera easily now. I don’t even know why. He nonchalantly leaps into the air and tears the Isabelle part off. The chimera doesn’t move a single muscle to defend itself. After all, in an attempt to squeeze everything into one episode, we don’t have time for a drawn out fight. Even Joseph doesn’t do anything to fight back. He just stands there. Maybe Ruth is now infused with Chise’s magic, but this is poorly conveyed outside of maybe some fuchsia-looking hue around the dog. And Joseph doesn’t do anything, because he’s missing an arm? I’d like to thing the show’s big bad villain is a little more capable than that, but maybe not. Honestly, the whole thing is really super anti-climactic unless you’re already in tears due to the whole pact bullshit. Fans of the show wax on and on about its ability to establish atmosphere, but I disagree. I don’t think some pretty animation and an insert song suffices. Most of all, I don’t think the anime does a great job developing the characters’ emotions. Even Chise’s disposition feels more like lethargy than actual depression. After the chimera has been subdued, Joseph simply gives up for now, because undoing a pact is hard or something. He then casts Escape. He literally just disappears into thin air, and nobody even bats an eye. And that’s it. Renfred and Elias share a few words. They straight up acknowledge that the big bad villain of the series doesn’t even have a motive. He simply does whatever he feels like doing. 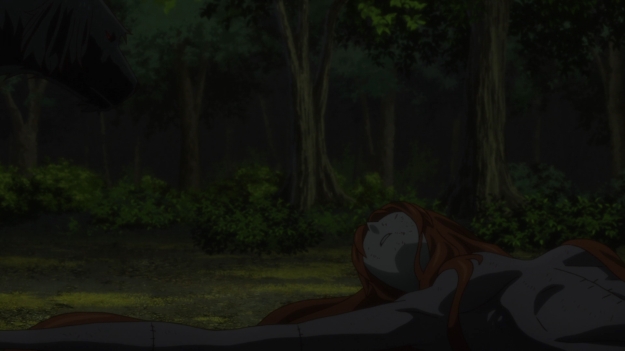 So let’s sum this up. We got Ruth’s backstory, a bit about Joseph’s backstory, Elias going nuts, Chise going nuts, a pact, the sudden revival and death of Isabelle, blah blah blah. All of this crammed into one 24-minute episode. None of these elements are done very well, though. Worst of all, I am never emotionally invested as a viewer. Like I said earlier, the characters’ emotional states are underdeveloped. When Chise gets angry at Joseph, I don’t feel angry with her. When Ruth is desperate to see his master wake up, I don’t feel that same sense of desperation. Even though Elias supposedly goes berserk due to Chise’s injuries, the whole thing is oddly subdued. It still feels like he is in total control, which is not what I expect when your love interest almost gets killed. And without strong emotions to drive the narrative, all I really have left is a bunch of exposition. The show looks very nice overall, but that’s not enough. It’s like that episode with the fairy king and queen. It all looked very, very nice. But what do you want me to feel? This episode tries to pull me in different directions, but in the end, I am just emotionally detached.

4 thoughts on “Mahoutsukai no Yome Ep. 8: Getting biblical”