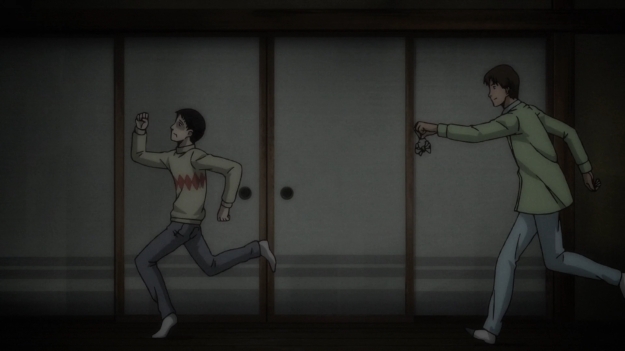 Souichi’s a weird boy who apparently has the ability to curse others. Or maybe they’re just coincidences. It’s hard to tell sometimes. If you nail a doll to a tree, and a kid elsewhere suddenly has stomach pains, can you really take credit for that? But later in the episode, Souichi buries a doll in the woods, and the victim is later found buried up to his neck in those same woods. Welp, can’t explain that. Nevertheless, Souichi assures us that he has a kind heart. And to prove it, he digs up a hibernating toad, takes it home, uses it to scare his dear sister, then sticks the poor animal in some tin box. By the end of the episode, the toad will have died and rotted away. And well, that’s about it. There’s really not much else to discuss about Souichi and his life. He’s just a weird kid who might actually have Voodoo powers.

I didn’t particularly enjoy this episode, but at the same time, I wouldn’t call it a bad adaptation. If you’ve ever read “Souichi’s Convenient Curse,” it’s pretty much as silly and non-scary as the anime. Moreover, the hammy voice acting actually helps to heighten the story’s ridiculousness. I couldn’t help but laugh at that kid’s “cries” of terror in the bathroom stall. Even Souichi’s Slenderman-esque antics kinda put a smile on my face. But overall, I will still say I didn’t enjoy the episode because the rest of it bored me. It doesn’t really go anywhere, and Souichi almost seems harmless. He’s really not, but he’s so goofy, you just want to write him off. As a result, there’s nothing particularly interesting to grasp here. Why they chose to adapt this manga, well, your guess is as good as mine. In any case, Souichi’s story isn’t over yet, but I sure hope this is the last we see of him in anime form.

When it comes right down to it, we hyped ourselves up because we see Ito Junji’s name and we think scary, creepy, grotesque! We think “The Enigma of Amigara Fault,” not some kid going “KEKEKEKEKE” over and over while sucking on some iron nails. But Ito Junji’s been around for decades, so he’s bound to have some “light-hearted” works here and there. If this is a celebration of the man’s career, it’s only fitting that they cover everything he’s done and not just pigeon-hole him as manga’s answer to Lovecraft. Of course, I still hope to see the more disturbing stuff come to life. Don’t get me wrong, I’m definitely not here for dorks like Souichi. I’m not happy with the first episode, but I’m also not too worked up about it. The season is full of shows, so even if this one sucks, oh well. Basically, the jury’s still out for me.

Plus, the incredibly short story that caps off the end of the episode is hopefully a small taste of what’s possible. It’s not great, but at least it’s not Souichi. What is it about? A couple despairs over the fact that their daughter has turned into a doll. Apparently, there’s a strange affliction going around; girls are turning into wooden dolls for some inexplicable reason. Most parents will immediately put their sick daughters to rest, but this couple refuses. What’s wrong with keeping a doll around? It can’t hurt, right? The manga is just as short as what we see here, but it’s cool nonetheless. Go ahead and read it for yourself. I wish they could’ve expanded on the story. Like… what is this doll affliction? And what exactly is the daughter turning into? But honestly, answers would just ruin the mystique.

2 thoughts on “Ito Junji Collection Ep. 1: One weird boi and his toad”