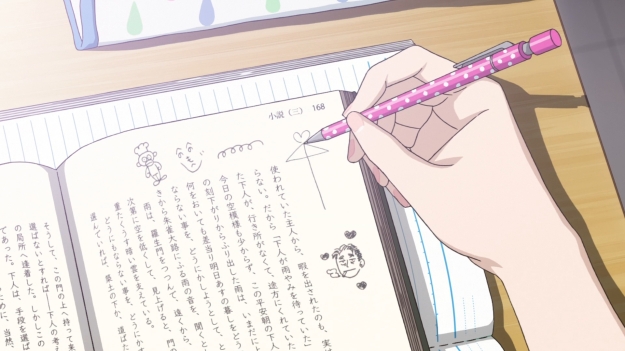 Akira’s teacher drones on and on about Rashomon as the lovestruck girl distractedly doodles on the margins of her textbook. We’ll soon see how important those doodles are. This week, there’s a heavy focus on Kase, one of the chefs. He appears to have an opportunity to tutor a high school student to earn some extra money. He balks, however, at the fact that his prospective student will be a boy and not a girl. All of a sudden, the story is setting him up to be the villain. Kase even begins to fantasize about Akira in a rather sexual manner, and this uncomfortable moment is capped off by him squeezing out some cream onto her plate. He obviously doesn’t care much about her as a person. She’s just a conquest to him.

Afterwards, he asks to borrow her textbook just out of curiosity. Y’know, the same textbook she had been doodling in earlier. I love the following scene. I love how we just watch her standing there, staring at nothing, and slowly but surely, the cogwheels are turning in her head. She eventually comes to the realization that Kase might stumble onto her secret. It’s a well-executed scene. And ultimately, this is what conflicts me the most about Koi wa Ameagari no You ni. It’s such a beautifully-animated show. It’s so well directed, too. But man, I hate its subject matter. It’s like reading Lolita. Vladimir Nabokov was a genius with prose, but that didn’t change the fact that the novel was difficult to get through solely due to its subject matter.

And just when I want to believe that no one here is a predator like Humbert Humbert, Kase blackmails Akira into going on a date with him. Welp, this bananas-and-cream little sleezeball just had to go there. Just look at his smug grin. And this might sound cynical, but I hate the juxtaposition that results from Kase suddenly emerging as the show’s antagonist (I don’t even know why it needs one). Kondo looks like a saint next to this guy, doesn’t he? Gosh, between the harmless Kondo and this asshole, wouldn’t we rather have Akira get into a relationship with the former? I feel as though we’re being manipulated into thinking this, but there are obviously more than two options available. There have always been more than two options for Akira to choose from. 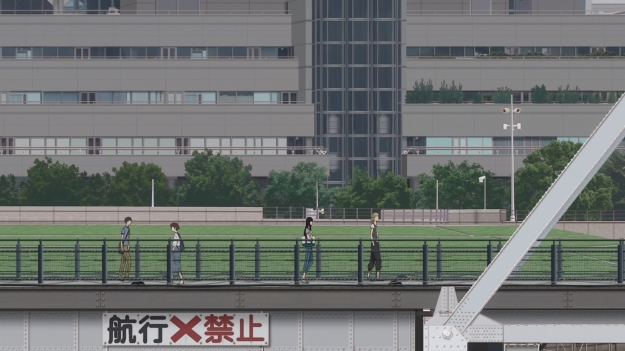 In the end, the girl is forced to go on a date with Kase. Again, I commend the show’s direction. We are positioned far away from Akira and Kase, because mentally, she couldn’t be any further from him if she tried. She’s already putting up walls between them. This is essentially survival mode for the girl; her first priority is the protect herself. We don’t hear anything Kase tries to say to her, because Akira can’t hear him either. She doesn’t care what he has to say. This date was forced on her, and she just wants it to be over. All we can hear is the overpowering soundtrack. This is good storytelling through both the visuals and the music.

A little later in the episode, even though Akira wants to go home immediately after the movie, he drags her to a cafe to drink tea with him. The resulting conversation between them couldn’t be more forced. The girl claims that she used to be depressed about her injury, but she’s over it now. I don’t believe her. Would it be harsh to say I don’t believe her because I think she’s using her love for Kondo as a way to cope with her depression? Even Kase seems to come to the same conclusion. This predictably angers Akira and she storms out of the cafe.

In the middle of her trying to get away from Kase, Kondo suddenly calls Akira up and asks her where she’d like to go on their date. This is what I’m talking about. Kondo and Kase are placed side-by-side for us to compare and contrast. We are meant to decide between the two of them. Next to a pile of dog food, even a bologna sandwich can look appetizing. Nevertheless, I refuse to see a potential relationship between Kondo and Akira in a better light just because Kase is such an asshole. 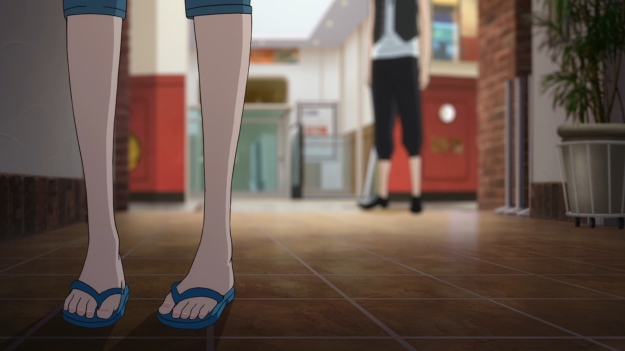 Akira is thrilled that the date between her and her manager is coming to fruition. It would be cute to see Akira jump and giggle in place if it weren’t for the fact that she will be going out with a man old enough to be her father. So instead, I’m just sitting here with a frown on my face. And of course, Kase sees and hears everything, so he has more ammo to work with. Just to make the audience hate him even more, he kisses the girl on the cheek even though she obviously despises him. Not only is this creepy, it still won’t make me root for Kondo. At this point, I feel as though this story is just going to get much tougher and tougher to get through. This is all a game to Kase. He’s stalking his prey, and he intends to win. He doesn’t see Akira as an end in herself, but rather a means to his own gratification, sexual or otherwise.

Eventually, Akira goes on her date with Kondo. Curiously enough, they end up watching the same movie, and afterwards, they go to the same cafe. Everything’s flipped on this second date. This time, she likes the movie. This time, she wants to go to the cafe. Sure, I can admit that it feels as though Kondo is trying to turn Akira off from him. First, he mentions how he can’t normally watch scary movies with his kid. Reminder: he has a kid. Second, he wipes his face with a towel (or napkin) like a slob. He doesn’t act like a charming boyfriend; rather, he gives off that goofy dad vibe. But of course, compared to Kase, Kondo must look like a complete gentleman. It’s just too bad both men are too old for a high school student. But again, if you want to be charitable to Kondo, you can read his actions as an earnest attempt to deter the girl from pursuing a relationship between them. Nevertheless, I still don’t think it’s very difficult for an adult to draw a line in the sand. He’s a manager, too! He should be used to having difficult conversations and putting his foot down.

As the 45-year-old man takes a sip of his coffee, however, he begins to reminisce about his first date. I know he hasn’t lived the best life. I get it. I still think this is silly, though. I reminisce all the time too. I don’t date a minor while doing it. I understand how others might sympathize or even empathize with him, but I can’t get over the mental hurdle. I just can’t. In my mind, when there’s a super important problem to tackle — like making sure Akira understands how inappropriate this is — there’s no time to pause and reflect. There’s no time to get nostalgic. Instead, I just feel as though I need to fix the problem before I even think of doing anything else. 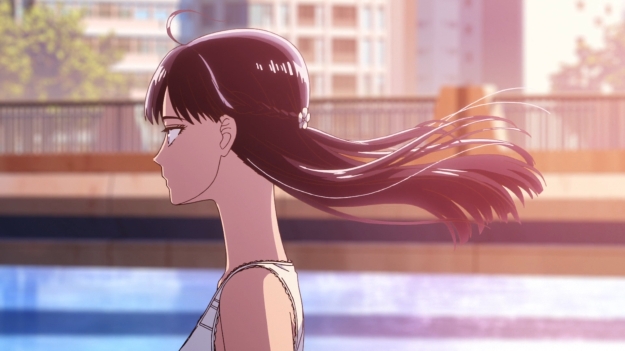 Kondo looks around the cafe and realizes that it’s full of couples. It’s also full of age-appropriate couples. This snaps him back to reality, and he immediately rushes to end the date. I can’t help but feel as though it never should’ve gotten this far in the first place. And like Akira did on her date with Kase, Kondo gets a phone call; he’s being called into the restaurant on his day off. But as he turns to relay the news to Akira, seeing the girl with the wind blowing through her hair takes his breath away. Unlike Kase, he doesn’t see her as a sexual object. She’s just a beautiful girl. He then thinks to himself, “I constantly feel sad inside, because of her youthfulness and her innocence. And because I can’t stand the fact that I’m not young anymore.” Innocence is supposed to have a positive connotation here, but I have obvious qualms about it. And I know that Kondo knows that any resulting relationship between the two of them is wrong. That has never been my issue. My issue is that he is unable to reject her, because he’s too concerned with relative trivialities. He’s such a pushover that Akira can completely roll over him. So in the end, what difference does it make? Your morals don’t mean anything if you don’t have the guts to stand by them.

Our feelings matter. Of course they do. His sadness matters. Her depression and subsequent infatuation with him matters. I don’t deny any of that. But there comes a point when you just have to put your foot down regardless of the emotions at hand. You have to be responsible. Afterwards, once any possibility of them being a couple has been thoroughly squashed, he can fantasize all he wants. But until then… c’mon, be the adult and have that difficult conversation. Stop apologizing and stop being scared.

I really don’t see what’s so difficult about turning Akira down. I’m sorry, but I really don’t. There’s really no need to spare her feelings, because she’ll get over it. How do I know? Because it doesn’t matter who she loves — whether it’s Kondo or some other boy or girl — she can always get over it. We’ve all had our hearts broken before, and we’ve all survived. It’s not — nor will it ever be — the end of the world. He really only needs to say something like, “I’m sorry, but it would be inappropriate for us to have anything that goes beyond a business relationship. Not only am I nearly 30 years older than you, I am your manager. There will be no further discussion about this.” Bam. End of story. Is that so hard? You have to rip the band-aid right away. The longer Kondo puts this off, the harder it’ll be for both of them. I also don’t care how lonely he’s been, or how much he misses those halcyon days of youth. At some point, you have to be the adult that you are. You have to face reality.

Kondo and Akira begin to separate at the train station. If the dates are truly mirrored, then she will kiss him… 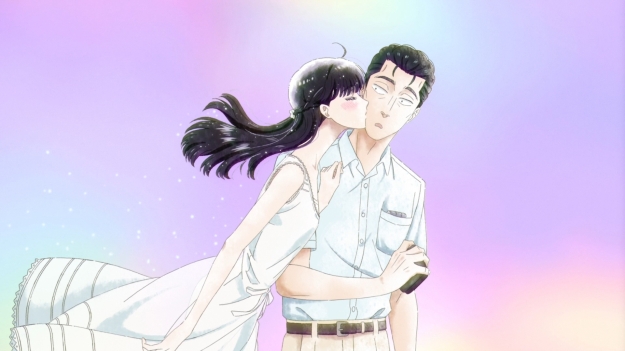 …but apparently, it only happens in her mind. Later that night, Akira only wants to keep the booklet that she got with Kondo. Again, she thinks she only has two choices, but that’s just not true. This is nothing more than a false dichotomy. I wonder if she’ll ever come to that realization.

Oh yeah, we just saw the same date from two different persectives. Kinda like Rashomon, wouldn’t you say? But if Akutagawa’s short story is about the subjectivity of truth, what light does this shed on Koi wa Ameagari no You ni (if any)?

— There’s always a ton of wrist-grabbing in anime. I can’t even remember the last time I grabbed anyone’s wrist.

— What the hell? Why is that angry salaryman watching it again as well?

— That waitress almost remembers Akira. Man, I want her to say something like, “It’s nice to see a father spend time with his daughter!”

— I think the sugar cube scene is supposed to be funny, but it feels tonally out of place with the rest of the anime in my opinion. I didn’t like it.

— Yeah, I’ve never learned to love black coffee. Smells great. Looks great. Tastes acrid. For a week straight, I forced myself to gulp down shots of espresso, and it just didn’t work.