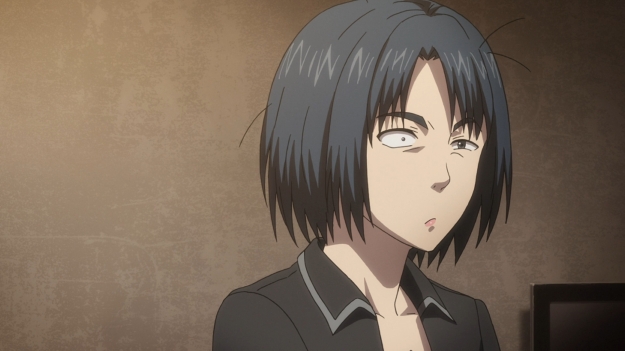 It’s really hard to take this show seriously when it seems intent to shoot itself in the foot with its sudden tonal shifts. Majima just got done telling us a sad story about her entire family turning into those Heralds, and all this guy wants to do is sleep with her. All these goons ever think about is sex, apparently. If they’re not busy trying to rape Juri or molesting some woman in a supermarket, then they’re trying to negotiate sex from Majima in exchange for helping her. Sigh. Are these guys all really that desperate for sex? At least Juri quickly puts that guy out of his misery. No more sex for him. Good riddance.

So what does Majima want anyway? Well, if Juri can expel the jellyfish from people, can she also expel them from the Heralds? On that fateful night, Majima’s family got stuck in Stasis. For some reason, they also have a magical stone, and this is why they were able to move freely in the time-stopped world. Unfortunately, if you succumb to despair, then you turn into one of the Heralds. As much as I initially wanted to hear Majima’s backstory, it actually kinda sucks. It just doesn’t make sense to me that her family would give into despair so easily. It’s like a switch had been flipped in her father, and he instantly became despondent. Shortly afterwards, her mother and brother followed suit. She would’ve joined them too if it hadn’t been for Juri. So I get why Majima is here. She wants to at least collect her family’s bones and give them a proper burial. But the execution is poor; it feels rushed to hell and back. If we had seen her family slowly fall into despair over the course of a couple weeks, then it would’ve been a lot more believable and thus a lot more tragic.

The rest of the episode is pretty predictable. Juri and her grandpa try to save Takafumi, but the pathetic wannabe patriarch starts fighting with his own family right outside the enemy’s headquarters. I mean, I pretty much knew he would pull this stupid, macho nonsense. If I have to give this show credit for anything, they did a good job at making Takafumi easy to hate. What a pathetic existence of a man. He takes blame for nothing; rather, he puts this all on the grandpa.

We also see Sagawa test out some more Herald theories, and now that he’s seen three conspicuously familiar Heralds show up, he’s onto Majima. Elsewhere, Tsubasa and Makoto return home just to stumble right into a trap. The former gets stabbed, and the episode ends on yet another cliffhanger. The next episode preview almost seems to suggest that he might become one of the Herald himself. Or maybe not. I’m not too concerned either way. After five weeks, I still haven’t really warmed up to any of the characters. I want to hear the full explanation for Stasis and everything related to it, but otherwise, I have almost no emotional investment in the series. I just don’t feel anything when I watch this show. No excitement, no sadness, no despair, no nothing. Even Majima’s backstory feels clinical and rote. Worst of all, I still don’t really know what Sagawa is really after.

Anyways, here’s another absolutely terrible Majima face to wrap this week up.