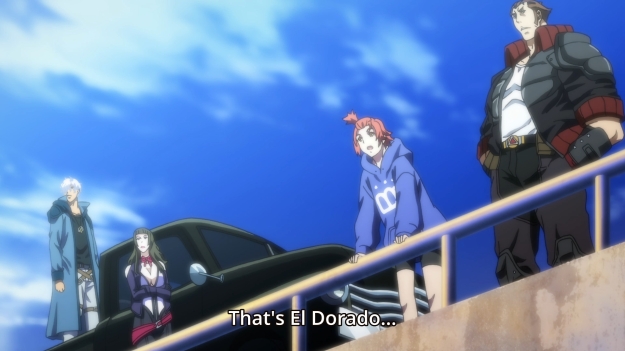 Our party finally reaches El Dorado, but unfortunately, Gina has to take a temporarily leave of absence. Apparently, she’s run out of weapons, so back to the Land of Guidance she goes. Everyone else continues on. I should be happy that we’ve finally made it after all this time, but… I dunno, it kinda feels like we still aren’t quite there yet. I know that sounds odd, but I’ll try to explain what I mean. Thanks to Luke’s magical rain powers, our heroes can calmly walk into the city without issues. They then proceed to establish a base of operations somehow. The episode is unfortunately low on details. This is both Sword and Luke’s first time in the city, so it’s not like they know the ins and outs of the place. Also, they don’t exactly have connections here. How did they just stumble upon such a convenient safe house? How are they even sure it’s safe? It’s even kinda furnished and everything!

Afterwards, there’s a tiny bit of sightseeing going on as the group wanders around the city and marvels over its technological superiority. Of course, it’s all about big boobs with Sword. Wait, check that; it’s 50% big boobs for Sword. The other 50% is reserved for food, and as such, we see our heroes drop by a chicken shack for some grub. As they sit at the counter, one of them casually muses, “It’s weird that Bishop and the others haven’t made a move yet.” And that’s precisely the problem. The episode lacks any sort of tension or excitement; there’s no sense of urgency. We’ve finally made it to the fabled city, and yet I feel disengaged and bored by everything that’s happening on screen. If we hadn’t already seen El Dorado like three weeks ago, then maybe I’d be a little more interested in seeing the city along with our heroes. But I already have, so this just feels like a bit like a retread.

Anyways, Sophie tries to gather information by connecting her phone to El Dorado’s own network, which is aptly named ELDO NET. Somehow, the system can jack into your brain and feed you sensory information. As a result, Sophie can not only feel the cold of the internet water, but she can even feel pain when she bumps into an internet planet. Of course, everything’s rendered in an oddly cutesy cartoonish fashion, so ELDO NET is not exactly a great simulacrum of reality. What’s the point of all of this? Who knows? Maybe this advanced version of the internet will play a bigger role as we inch our way towards King’s true goals. We learn that although the city around them is referred to as El Dorado, King is still pursuing a true El Dorado. Maybe the true one exists online and King wants to rule people via the internet. After all, he did gather a bunch of talented programmers here for a reason, and that apparently includes Sophie’s brother Martin. And being able to live entirely on the internet would make certain people really happy.

Sophie eventually catches the attention of some mysterious guy on ELDO NET, and he tells her to come to a secret location. There, they find a former employee of GarEden. He stumbled upon a great big secret about the company and the city around it, so he’s been hiding out ever since. How long has he been here, though? How does he eat? How does he shower? How come this empty building has all the power he needs and requires? Again, I just feel disengaged from the episode because the world-building feels lacking. Even the revelation that a mysterious individual not only helped him, but knows about Sword isn’t really doing much to draw me in. Then magically, he’s been found out, so a bunch of Horrors dressed in riot gear shows up to crash the party. At first, it seems like our heroes are outnumbered, but then Sophie suddenly gets a vision of a girl with Horror-like eyes… and she now has the ability to control the cameras and lights of the building on her phone? Eh… 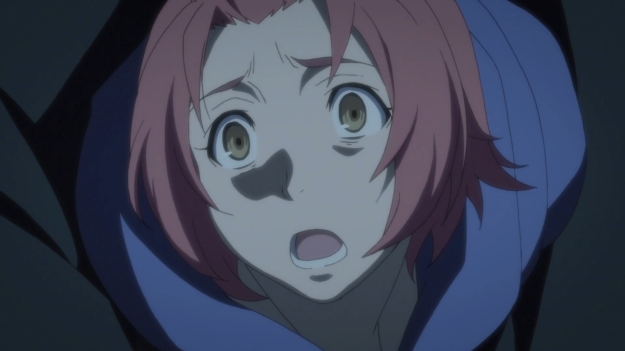 I dunno… maybe this episode is low energy, because it seems like everything is going to go down next week instead. Maybe. It’s titled “Farewell,” so maybe someone important will die.