Well, I’ll be damned. The kid is still alive somehow. Welcome back to Kokkoku, you guys. Maybe now the anime will finally get interesting.

— Luckily for the kid and Majima, his jellyfish immediately leaves his body, so he gets to be in stasis. This also means he’s protected… I think. I’m assuming there are still other Heralds out there to protect the Stalled. I could be wrong, though. Also, i’s going to be awkward to explain everything to him back in the real world… like why Majima is now an adult woman and he’s still a kid.

— Grandpa tells Juri not to feel guilty about Majima’s family, but it’s never that simple. You can’t tell people not to feel bad, then all of a sudden, their guilt goes away. Plus, Juri is right: just by being in this family, she bears responsibility. We don’t like to think that our ancestors’ sins and obligations are passed down to us, but someone has to step up to the plate and right the wrongs. She may have never wanted to have anything to do with this world, but it’s too late to stand idly by now.

— Somehow, I feel like this guy will die anyway. In any case, Sako wants to join the Yukawa family, and to do so, he’s going to have to give them information. Sadly, he still can’t tell us what Sagawa is up to: “He’s really interested in Stasis. I don’t know what he’s up to…” C’mon, man.

— Is… is this it? Is this all that Sagawa wants?

That can’t be it, right? Do you really need to become the leader of a religious cult, kidnap people, and hire goons to murder just for this? Unfortunately for him, his adherents manage to overhear his true intentions, so they now feel as though they’ve been betrayed. Yeesh, for a cult leader, Sagawa sure is careless. 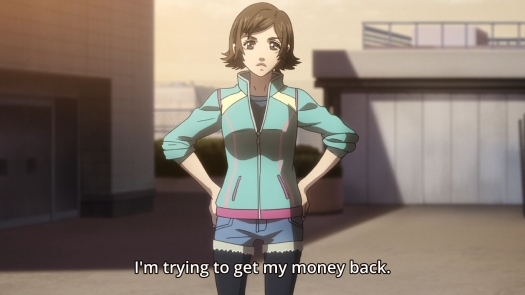 — Juri gets a garish new outfit; I preferred the old one. Her plan is to kick the bad guys out of this world, then when she returns to her world, she’ll smash the Master Stone to bits. I guess no sensible person will disagree with her, and it’d be hard to. What exactly is the Stasis World good for anyway?

— Meanwhile, Takafumi continues being a complete idiot. If I were Juri, I’d just dispel his jellyfish right here and now so he doesn’t get in the way later on in the story. But knowing anime, he’ll probably stick around for some redemption moment near the end of the series.

— More exposition… sigh… Majima tells us that the cult has been around for centuries. Then we are told that there might not be another Herald to protect the Stalled. Whoops. We can’t be sure, though. We can’t be sure until someone tries to summon one.

— Juri can’t help but wonder if there’s a connection between her family and Sagawa in the past. I think this story isn’t quite sure what it wants to be. I think it could’ve been a whole lot darker, because there are a lot of twisted things you can do in Stasis. Nevertheless, the story has been pulling its punches all series long, so all we get are a bunch of tasteless rape jokes and some smushed heads. And now, the drama is all about some rather mundane family affair. When I first read the show’s premise, I thought that the Heralds would serve as a sort of enigmatic, out-of-this-world threat. Unfortunately, they were quickly figured out, and they might not even show up again for the rest of the series. There’s really nothing threatening left in this story, so the tension is equally nonexistent.

— They’re gonna get screwed by Grandpa’s inaccuracy at some point. For now, Juri’s only punishment is a kick to the face. Still, one down, six more to go.

— Well, well, well… look who wants to fuck things up. Again, my issue with the anime is that our antagonists are personality-less cult leaders and bumbling, annoying fuck-ups like Takafumi. If you like that, hey, that’s your prerogative. I just don’t find any of this particularly compelling. 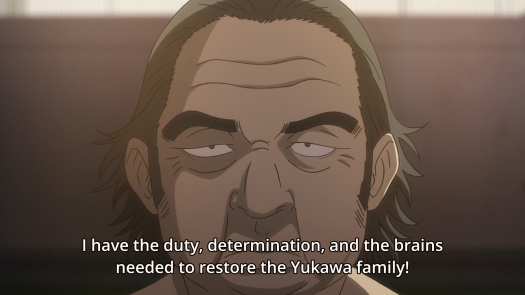 — So why are you jobless, my dude? This is basically the Dunning-Kruger effect in action.

— Jesus Christ, some guy manages to find the Master Stone just like that.

— So more exposition… the guy who found the cult lived for 500 years. He might have stumbled upon something big, and Sagawa wants to find out what that is.

— The problem with being a cult leader is that your followers will actually believe your nonsense. So even though Sagawa has other designs in mind, he has to get past this stupid his followers. Luckily for him, he apparently has a secret power he’s been keeping under wraps until now. But do we get to see it this week? Nope! 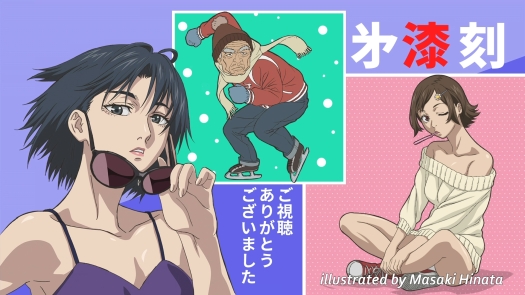