So this is officially the seventh episode of the season, huh? And I assume we’ll get another recap episode at some point. That seems like a waste of time to me, but who knows? Maybe some people out there need multiple recaps. In any case, we get a setup episode this week, so there’s a lot of background information and new faces to introduce. Arato and Lacia even take a backseat to help facilitate this. I can’t say if this is a good thing or not, because I’m not a big fan of Shiori. I know there are cultural reasons for why she’s in her current situation, but I can never find myself empathizing with someone who even entertains the idea of political marriages. But enough about that. Let’s dive into the show already.

— This is all surprisingly low-tech for a universe like Beatless. Who’s this? Is she an hIE? Is she human?

— It’s sad that Arato’s sister thinks he’s too dumb to watch the news. I know it’s supposed to be a joke, but a lot of kids are apathetic to current events. It shouldn’t take a tragedy — like, say, a school shooting — to jolt our youths back to life. In any case, it’s his fault that his sister is this way. She’s completely spoiled by him and Lacia.

— Speaking of Lacia, she just made a plate of donuts without any frostings.

— 9500 kcal? That’s nuts. I barely consume more than that in a week (to be fair, I’m on a diet). What’s the point of making donuts though if you’re just going to shame the girl into not eating?

— Arato feels bad that someone possibly died in that attack on the conference. But y’know, multiple hIEs went down that day in an attempt to protect humans. Those hIEs may not have been advanced or pretty as Lacia, but they still lost their lives for no good reason. I suppose Arato hasn’t gotten to that point where he starts caring for every living thing… even though the first episode established the fact that he supposedly does.

— To make a long story short, the only way to bring back the three renegade Lacia-class hIEs, they’ll need to send a Lacia-class hIE after them. PMCs can’t handle these advanced androids. More importantly, some skeezy-looking scientist speculates that Kouka and Snowdrop attacked the conference because their only directive in life is to protect the data that they carry. Okay, let’s assume that these super smart hIEs can’t give themselves a purpose. How does attacking some political experiment help protect their data? A pathetic-looking scientist wants to blame the incident all on the hIEs’ owners, but as we’ve already seen, Kengo was influenced by Kouka, not the other way around. She wanted him to take responsibilities for her actions, but they were her actions nonetheless.

— I still don’t get all this talk about how they require an owner to survive in the outside world. What protection can a bunch of high school students offer to these hIEs that can apparently take down entire PMC squads?

— Oooh, the hIEs broke free due to an inside job.

— Then there’s something about Ryo’s sister entering into a political marriage to strengthen her company. After Kengo, I guess Ryo is the focus now. She starts feeding us exposition about how he’s lost his spark of life after a certain incident. More importantly, there’s some creepy incestuous vibes between her and Ryo. Why do we always gotta go there?

— Methode looks a lot like Lacia, but then there’s the fact that they’re all Lacia-class hIEs. Lacia, Lacia, Lacia. In any case, Methode is going to go after Kouka and Snowdrop. I’m going to be disappointed if the latter two end up coming to Arato for help and protection from Methode. Another lame possibility is that his two buddies become their owners. Something about a bunch of high school boys owning perfectly capable living things just skeeves me out.

— After all that plot, we boomerang right back to Yuka being a giant airhead. She’s the worst character on this show. Her phone even beeps when her brother is nearby. It’s pathetic. Shiori’s acting oddly in this scene, but I don’t care about this show enough to find out why. I’m sure the anime will spell it out later anyway.

— Great disguise. Surely nobody can spot her now.

— Oh no, Ryo is getting himself involved with these scientists. He and the creepy scientist suddenly engage in a pretentious discussion about determining the humanity of a thing. I guess the most important thing to learn is that Ryo is selling his buddy out.

— For a fancy event, the food looks pretty weak. What is that in the middle? Just penne with some tomato-based sauce? Possibly spaghetti sauce? C’mon.

— She’s still just a child, dipshit. Oh lord, his moustache looks like it is glued on.

— Methode reveals to Shiori (of all people) that she was behind the incident at the Tokyo Research Center. She also apparently claims she has no clue what her owner is up to. Methode’s gimmick? She can have more than one owner, and she wants Shiori to be her owner as well. It sounds like she wants the freedom to refuse Watarai’s orders. The only way to do that is to have it run into conflict with another owner’s order. This is ridiculous. If these hIEs are so damn smart, why can’t they just do whatever they want? Why place this limiter on their actions? What is this convoluted owner-responsibility setup supposed to reveal to us about both humans and androids?

— It’s possible I’m missing something very crucial about the plot. After all, I’m not following this as closely as I could. I don’t love Beatless as much as I’d like to. 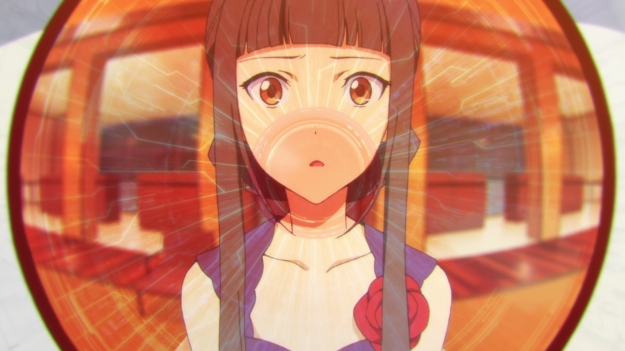 — In any case, the possibility of having a powerful hIE on her side is all too tempting to a caged bird like Shiori. But it’s doubtful she’ll be in a much better position with an hIE like Methode. The latter just wants to do whatever she wants, and Shiori will have to bind herself to that. It just sounds like going from one prison to the next.

— Something serious went down in the post-credits scene.