Ugh, I’m actually kinda glad to see Killing Bites. Is it because I enjoy it? Oh no, no, no… Y’see, I just got done with writing up Beatless. That show certainly has its flaws, but it is also incredibly wordy. As a result, it’s just nice to change things up every once in a while. It’s nice to be able to dive into something so mind-numbingly stupid like Killing Bites. Alright, let’s get started.

— Oh great, backstory for Yuya. ‘Cause he’s important. Yep. He sure is. He tells us how he’s been drifting through life, just doing whatever people told him to do. He’s so weak and ineffectual that a bunch of gang rapists felt they could rely on him to be an accomplice. That’s how pathetic he is. And sadly, he’s pretty much drifting through this Destroyal as well. He’s so useless that Hitomi mostly calls the shot. Oh sure, he cares about his pieces, so he’ll move them to try and protect them. Yep, this is anime, so the main character’s strength will always be his dumb heart.

— Everyone is shocked (still not as annoying as Krillin and Master Roshi) to see that Hitomi is still standing, but enough about that. As I’m watching this scene, I can’t help but wonder why we almost never see duplicates. The one time we had duplicates, it was because they were lesbian twins or some nonsense like that. I’m just saying… if Taiga Aisaka is so damn strong, why haven’t they made more of him? 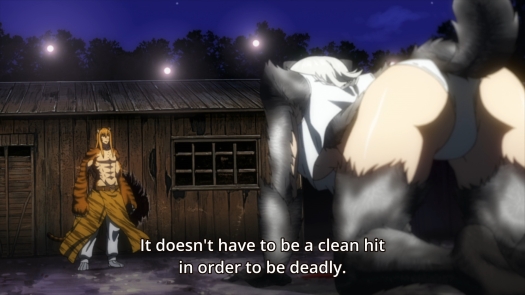 — Taiga’s deadly move tries to trick opponents into a bad move so he can counter-attack them. Ah, but if you don’t move, then he can’t counter-attack! Genius! I recently read that the hide of a honey badger is strong enough to withstand spears and machete blows. I don’t know how true that is, though. I’m not exactly going to go attack an innocent animal just to see if my weeb shows are accurate.

— Everyone thinks Taiga will kill Hitomi so Yuya just goes along with it. He just thinks the girl is doomed, blah blah blah. He even allows Yoko to taunt him relentlessly. Eh, it’s not like running away loses you the game. It’s not like Hitomi can’t just regroup elsewhere and fight Taiga again later. The anime makes it seem like it’s a great big shame if Yuya orders her away from this square, but I really don’t see it. He should also be paying attention to what Bunny Girl is saying, but I guess everyone just ignores her.

— Man, I don’t give two shits about Yuya’s sudden crisis of confidence. Just get back to Hitomi.

— This dork starts telling us how much fun it has been to hang out with Hitomi… like the time she abused him because he didn’t understand what she was signaling to him. So much fun.

— The BGM here is pretentiously overwrought.

— In the end, Yuya remembers that he’s supposed to believe in Hitomi. Great, we repeated this bit of character development all over again. It’s also a foolish move in my opinion. Yes, I have the benefit of knowing that Kido will soon crash the party, but it’s not like Yuya can’t know that as well. He simply remains a useless character through and through.

— More importantly, he’s still leaving his life in the hands of others. He simply chose to put it in Hitomi’s hands this time. He’s still a spineless loser through and through. That lady can go on and on about how it takes fortitude to let others dictate your life, but that’s pure sophistry. Alright, we wasted enough time with the boring humans. Go back to the brutes already.

— Taiga finally attacks, but Hitomi is prepared for it this time. But again, we don’t get to watch these two throw down, because this scaly tail comes out of nowhere to knock her aside. I guess Kido is finally here… and judging by the tail, I would have to guess that he’s a lizard of some sort. What is he? A komodo dragon?

— Yoko reveals that she taunted Yuya because she knew he would keep Hitomi in place. As a result, Taiga would also remain in place, and this is the ideal location for Kido to take them both out. Oooh, what a mastermind. Nobody could’ve predicted that!

— Apparently, using Kido is a dirty tactic. Shocking. But Yoko will do whatever it takes because winning this Destroyal will surely get her grandpa back! Here are the carefully laid-out steps:

— Meanwhile, Bunny Girl frees herself from the lusty civet, and tricks the woman into falling into a seemingly bottomless pit. Uh… this sure is something, alright.

— Hitomi tries to fight back against Kido, but none of her attacks can do anything against the guy’s armored skin. I guess her sharp fangs can’t bite through everything… or can they? We all know she’ll win this stupid contest at the end of the series.

— Kido readies his killing blow, but Taiga saves Hitomi at the last second. Why? Is he trying to be honorable? Not really. He’s just salty that Kido is targeting Hitomi first. He then tries to attack Kido, but like Hitomi, his attacks do nothing. Eventually, Kido reveals his complete form and he’s not a lizard at all! He’s a pangolin! Who would ever find such a cute little mammal threatening? Killing Bites, apparently. Man, I still think a komodo dragon would’ve been better.

— But that’s it for this week’s episode. If Hitomi didn’t want to regroup before, she’ll definitely have to do it now. We’ll find out next week how she’ll accomplish that.