These characters’ attitudes towards hIEs like Lacia are so bizarre. They don’t have a heart? Can Arato even define what it means to have a heart? Plus, instead of wondering whether or not Lacia has a heart, she should be asking her why she even wants to be with someone like him. Anyways…

— The episode opens with a scene between Methode and Shiori, but it feels like nothing we don’t already know about. The girl takes ownership of the hIE, but is shocked to find out that Methode is a Lacia-class android. Hm, okay…? The significance of this revelation is that Shiori has been left out of the loop, but she’s being a touch naive if she thinks anyone would tell a high schooler anything.

— Moreover, Shiori gripes at the idea of Methode forcing her to issue an order, but I’m not seeing it. How is she being forced?

— Elsewhere, investigators wonder whether or not the incident at the research center had been an inside job. Once again, info we already know.

— Finally, we see something new, but it’s just the Erika transferring into Arato’s class. Yes, the owner of the modeling agency is also a high schooler, and lest we forget, she also formed a contract with Saturnus recently. This is one of the “animeisms” that I really dislike about Beatless. The anime has so much promise, but here we are again with yet another high school transfer student.

— The whole Arato-Lacia relationship is also very limited because he’s a pure-hearted high school boy. In Blade Runner 2049, an intimate relationship with a domesticated AI did not just start and end in the kitchen. We got to see one of the strangest sex scenes ever seen in a sci-fi movie. Beatless wants to push the whole boy-meets-girl angle, but our boy can’t even lay his head on her lap without blushing like a virginal bride. And honestly, let’s be real: why would you create sexy robots and not try to fuck them? All these hIEs resemble slender, nubile girls, but gosh, we wouldn’t dare do anything inappropriate with them. Again, Beatless is full of promise, but its also gutless.

— Apparently, Erika is a time-traveler. To be more accurate, her family was rich enough to place her in cryogenic sleep back in the 20th century. Obviously, she’s since been reawakened. So she didn’t just transfer schools; she transferred from another time period. Like most anime characters, however, her family is completely out of the picture. They supposedly perished in the “Hazard,” an event that we know nothing about. Great. So a young girl has acquired a tremendous fortune, and she has no real authority figures in her life. That sounds like a recipe for success.

— Erika joins Arato for lunch, then proceeds to wax poetic about how she never got to experience school life back in the 20th century. Uh, what about your dead parents? Ryo storms off for whatever reason…

— The girl then fawns over Arato’s bento. She obviously knows it was put together by Lacia. For some reason, however, Arato is trying to conceal this fact from the public. In last week’s episode, he was reluctant to go forward with the boy-meets-girl marketing campaign, because he was afraid people would find it odd. Maybe this is the source of the main character’s anxiety. On the other hand, is it really shocking to hear that an hIE is making lunches for their owner? Wouldn’t this sort of thing be commonplace by now.

— The kids talk about some hIE gaining popularity after being destroyed. It sounds like someone is milking the tragedy for profit. Maybe they even wanted the hIE to die for this expressed purpose. Since these are hIEs, though, don’t they have their personalities and memories backed up somewhere? Can’t you just revive any of these hIEs?

— Erika then starts talking about how objects can gain a personality through branding. You can use a narrative to influence people’s feelings (obviously). Like how Erika’s story isn’t a tragedy. Rather, it’s a fairy tale and the girl resembles the eponymous Sleeping Beauty. Nothing all that ground-breaking is being discussed here. Actually, this conversation reminds me of the time I wrote about cuteness and how it can be exploited by capitalism. Man, that was a long time ago. In any case, my issue with this scene is that it doesn’t feel authentic. It doesn’t feel like a group of high schoolers getting together at lunch and having an organic conversation. Instead, it feels like the author lecturing directly at me about concepts that he may have picked up in college. 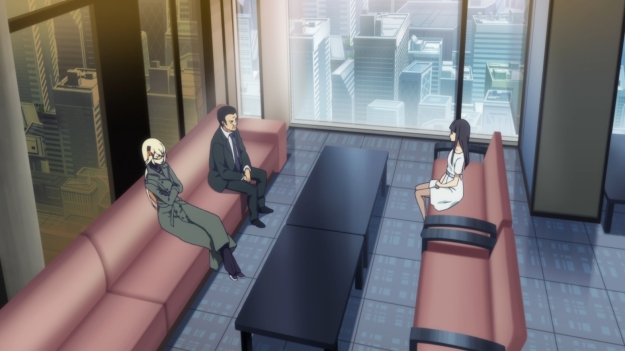 — So Shiori’s organization knows that Arato has Lacia… and they’re just biding their time, but for what? The guy will let Shiori in on his plans, but unfortunately, we don’t get to hear what said plans are. I have to imagine they want to retrieve Lacia at some point, but all I can do is speculate. Methode assures Shiori that the girl is now no longer a pawn in this convoluted game, but it seems obvious to me that the hIE is pulling the strings on her owner. Shiori is emotionally vulnerable right now, and this is clearly affecting her decisions. She resents being a pawn, she is angry over her powerlessness, and she’s sad about her brother. Ironically, this makes her the perfect pawn.

— Back at school, Ryo confronts Arato over the latter’s fondness for Lacia. Again, we get into the stupid debate about hIEs being objects. Are these guys blind? Lacia can think for herself and express her emotions. What makes her functionally different from humans? A soul? Don’t tell me people still believe in souls in such a distant future. My point is that the conflict just feels contrived. We’ve created these incredibly life-like androids, but the entire world is content on treating them like inhuman objects. Only one simple boy will stand against the tide! Doesn’t this premise seem ridiculous to anyone else? If we can die for our pets, then why are people like Ryo so incredulous that someone might form an attachment to their hIEs? What is this bizarro alternate universe?

— Ryo accuses Arato of being analogue hacked. More importantly, he accuses Arato of selling humanity out! Whoa! Seriously? All because Arato wants to treat a thinking, feeling being with the respect they deserve? Sure, the show insists that common hIEs do not have the capability to feel, but it’s obvious that Lacia does. Plus, I’m not so sure that these ordinary, day-to-day hIEs truly lack feelings. Considering how much people like Ryo wants to believe that hIEs are nothing but mere objects, don’t you think it’s possible that they’re deluding themselves in order to continue discriminating against hIEs?

— Anyways, the show is trying to convey the existential threat of androids. If androids are superior to us in every other way — strength, speed, intelligence, etc. — then aren’t humans obsolete? Ah, but humans aren’t obsolete if we continue treating the androids like objects! Good ol’ discrimination will do the trick! In any case, I get it. Regular humans don’t have a place if these hIEs can simply replace them. The problem is that this debate is being carried out between two clueless high school students. They don’t exactly have the most interesting takes. Case in point, Ryo is going about it the wrong way, though: “You shouldn’t care about Lacia at all!” Dude, that’s never gonna work. In fact, he’s too late. Pandora’s box has already been opened. The only way to hold back this tide is to never create advanced AI in the first place. Getting mad at Arato isn’t going to solve anything. The capability to create Lacia is out there. Even if the one we know and love gets destroyed, another one can be made in her image. Ryo eventually asks Arato who the latter will choose: humans or objects? False dichotomy, my brother! That’s a false dichotomy if I’ve ever seen one!

— We continue this senseless debate with Erika and Saturnus. The former tells the latter that an object’s shape is what gives it meaning. But hIEs aren’t objects. They can think for themselves and perform actions as a result of those thoughts. Their actions determine their meaning! Ah, whatever.

— Erika wants Saturnus to be cute, so the hIE initially tries to use her tool to create a new outfit. I guess that’s her gimmick; she can create anything from apparently nothing. It’s probably not nothing, of course. We just don’t know exactly how her tool works. This might be an anime, but conservation of matter probably still holds true. But yeah, this is why Saturnus is dressed like a typical anime maid. More stupid “animeisms.”

— So Shiori goes to Arato directly and asks him to return Lacia to Memeframe. Obviously, he does not want to do so. They then go on and on about registration numbers and whatnot. It’s like the lamest possible way to contest ownership of Lacia, but we’re just biding our time until the episode ends. We all know that they’ll eventually fight over this. We all know that they’ll have to resort to force. The show just wants to hold off on this until at least next week’s episode. As a result, Shiori tries to reason with Arato even though she knows it won’t work.

— In the end, Arato asks Lacia why she concealed her origins from him. She expresses her desire to be by his side. She wants an owner who can trust her, i.e. more or less treat her like an equal. He asks her if he’s being analogue hacked, but she of course tells him that only he can decide if he still has free will. I guess I just don’t see what the big deal is. Even if we acknowledge that free will isn’t an illusion, it’s rarely ever the case that we are free from external influences. Every single decision we make is affected by outside forces. Is analogue hacking any different from a good marketing campaign? Is it any different from an enchanting beauty asking us for favors? At the end of the day, the theme of the anime holds true: you gotta take responsibilities for your actions. Arato needs to stop being such a helpless boy and just take matters into his own hands.

— He won’t have much of a choice anyway. Shiori is prepared to take Lacia back by any means necessary.