Man, anime summer festivals look and sound so nice. There are festivals here, but they’re usually overcrowded, expensive, and dirty. Nevertheless, this week’s episode is titled “Rain of Sorrow,” so things are about to turn south. I can’t imagine Akira getting into a fight with her dear manager, though. Plus, she’s here with Haruka, so… well, let’s just get on with the rest of the post already.

— The normally tomboyish Haruka apologizes for being late, because getting ready took longer than expected. Are girls required to be in a yukata in order to attend one of these festivals or is that just an anime thing?

— I’d go to one of these festivals just for the vibes. I don’t think I’d touch any of these games. They don’t look as though they’d be much fun.

— Haruka is reminded of how she and our heroine used to eat shaved ice side-by-side in previous summers. Sadly, Akira’s friendship with Haruka remains trapped in the past. They’re hanging out with each other now, but when was the last time they actually spent any quality time together? It’s a friendship worth fighting for, but neither character has put forth much effort until now. Akira figuratively runs away to the diner every chance she gets, and Haruka finds it too embarrassing to reach out to her former best friend and express her true feelings. 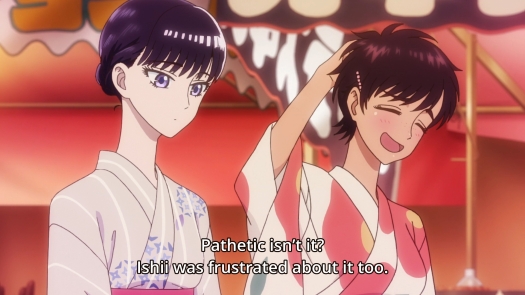 — Speaking of which, Akira reveals that this is the first time that they have hung out since she quit the team. I feel a depressive mood coming on. I mean, I just find that terribly sad. Don’t you? They were best friends! Yes, Akira got injured and quit the team, but c’mon… why did nobody try to save the friendship until now? Why have these two been so passive about it?

— To be fair, Akira has a strong reason. The story doesn’t come out and say it directly, but she was definitely depressed about her injury and possibly still is. I have even argued in previous posts that her crush on Kondo is a coping mechanism.

— Most friendships drift apart inch by inch, moment by moment. On the other hand, Akira immediately walled herself up after her injury, and Haruka can only stand from afar and look sad.

— Apparently, the team hasn’t been doing so hot since Akira’s departure. Nevertheless, Haruka wants her former best friend to drop by once in a while. But true to anime form, our heroine is too distracted to hear what Haruka has to say. Is it a shooting star? No, silly, that’s the wrong series! Then again, Haruka is a childhood friend…

— Akira ditches Haruka for a moment, because she sees Kondo and his son in the distance. No big deal, right? But Haruka notices a different look on her former best friend’s face; she can immediately tell that Akira likes Kondo. Sadly, she does not react to this revelation with much sensitivity. I mean, I understand how Haruka feels. I, too, find the idea of Akira and her manager getting together to be gross. But you’ll only drive Akira away by being so mockingly incredulous.

— Haruka then accuses Akira of never telling her anything anymore. Both sides could’ve tried harder, but we often judge ourselves by our intentions and others by their actions. As a result, the girl won’t accept that she plays a big part in their friendship falling apart. She feels that she had good reasons for being passive towards Akira. On the other hand, she’s not considering why her former best friend is struggling so much with the past. Instead, she just blames Akira for making things difficult. Akira says that things can no longer go back to the way they were, which makes the former run away in tears.

Honestly, Haruka is overreacting. If Akira can’t be on the team anymore, then yes, the dynamic between them has irrevocably changed. As harsh as that sounds, it’s also the truth. But this doesn’t mean that what their friendship has changed to necessarily has to be a bad thing. But oftentimes, relationships do fall apart this way. One side grows and/or changes, and the other side can’t accept it. By extending an invitation tonight, Akira is at least making an earnest attempt to reconnect with Haruka. She should be commended for that. She wants to reestablish their friendship even if it has to move in a different direction. Why can’t they just hang out at the summer festival and see where things go from there? Unfortunately, Haruka couldn’t help dredging up the past — and ergo, the team — and as a result, she creates unnecessary drama.

— Elsewhere, Kondo also reconnects with an old friend. He drops by a boisterous restaurant to see Chihiro, the author of the book that had Kondo in a tizzy at the library. I half-expected Chihiro to be a woman.

— Why are these two meeting up here? Well, it used to be their favorite hang-out spot. It would appear for now that this is another friendship that hasn’t moved on from the past.

— I don’t know what this is either. Miso dengaku? Man, there are so many foods I haven’t tried. In any case, this is apparently what these two buddies’ favorite dish used to snack on in their college days. Does the past taste as good as our memories would have us think? Kondo seems to think so.

— It has been ten years since Kondo and Chihiro last hung out together. We drift even further apart in our adulthood. This reminds me that I haven’t talked to my high school best friend in over a decade as well…

— Chihiro has young fans due to his book… but hey, Kondo has a young fan too!

— Kondo simply says that Chihiro’s book is not bad. I wonder what Kondo’s honest opinion truly is, though. He’s being rather guarded, so  he probably isn’t being entirely truthful.

— More relics from the past are unearthed; Chihiro digs up an issue from a magazine that these two used to publish together. Naturally, it’s a magazine about literature.

— Apparently, Kondo settled down to have a family whereas Chihiro continued his bachelor ways. This eventually led to the latter successfully getting a book published, but correlation is not causation. A married, working man can certainly write a book worthy of publication. It might be a little harder — he would certainly have far less free time at his disposal — but he could still do it. We even know that Kondo’s been writing; we’ve seen those discarded pages at his apartment. If Kondo regrets giving up on his dreams, he only has himself to blame. Of course, I’m sure he’s well aware of that. Kondo is far from a perfect man — and I’ll even argue that he has been inappropriate that one time with Akira — but he at least acknowledges his shortcomings.

— Kondo opens up to his former best friend, but like Haruka, Chihiro doesn’t seem to be the most sensitive sort. He doesn’t flip out like Haruka, but his response just comes across as a bit… hollow, I guess? He tells Kondo that he’ll always lend an ear, but it feels forced. Drink up, drink up! Drown your feelings in alcohol!

— Then afterwards, in the middle of heading home, the drunk author falls to the ground and whines like a child. He drank so much that he can’t even walk on his own two feet. As Chihiro eventually departs in a cab, Kondo levels some honest criticism about his former best friend’s writing. Chihiro responds by asking Kondo what he even knows about high school girls. Hoo boy, where do we start?

— Chihiro tells Kondo that they’re not adults. Rather, they’re still classmates. And this is exactly why they haven’t seen each other in ten years. Kondo has no business pretending to be a college-aged student. If their relationship would actually change and evolve to fit adulthood, then they’d still be in each other’s lives. But because one side insists on keeping things the same as how they used to be, the best that these two can do is meet up once in a blue moon and reminisce over fossils like their self-published magazine. I’m sure Kondo had a great time tonight. I’m sure he had fun seeing Chihiro again. Nevertheless, it’s not as though they’re going to hang out regularly again. They have both become men, but their friendship hasn’t grown at all.

— Sitting like that is not good for your back, kids. Sit up straight.

— School starts up again, but Haruka insists on being dramatic. Instead of just calmly walking past Akira, she has to run by with her eyes down. This is silly. Sadly, Akira can’t help but feel guilty about everything. She feels so bad about Haruka that she’s barely obsessed over Kondo.

— Later that night, Kondo can’t help but reach out to the girl. After hearing her story, he tells her to catch a glimpse of an incredibly large moon. Like holy shit, that is huge. It’s the supermoon phenomena. It’s not actually that big in person, but it’s still impressive-looking to say the least. And for some reason, it also can grant wishes. Man, everything in the damn sky can apparently grant wishes.

— Kondo points the supermoon out to Akira, because he doesn’t want her to think that her friendship with Haruka is a lost cause. If she truly wants to save it, then she can. He gives her some words of encouragement, and as she clasps her hands together, she hopes that she and Haruka can become closer again. For once, their relationship resembles that of a mentor and his mentee. Hopefully, this will last till the end of the series.