Time for a road trip! But before we get to that, let me tell you how Bargain Bin Kirito saved his elf-type loli from the evil Undead King!

— For some reason, the enemies’ hands and feet are glowing purple. Why? There’s probably a good reason, but do we even care anymore?

— BBK asks the homunculi why they would fight so hard for a master who treats them like pawns. ‘Cause that’s how she’s programmed? Dude, your company made this game.

— In truth, BBK only feels bad because these homunculi are cute anime babes. If they were weed goblins, do you think we’d be having this discussion? 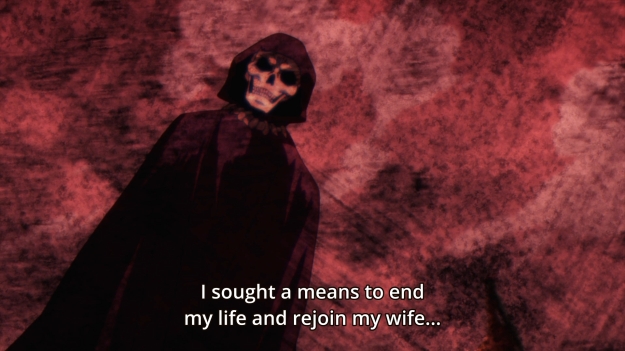 — Oh my God, we’re getting the Undead King’s backstory. Who gives a shit? To make a long story short, he just wants to die.

— Naturally, a quick way to die in this anime is to piss off the lolicon. You can accomplish that by stealing one of the lolicon’s loli slaves. The official story is that BBK pities the Undead King, so he wants to put the guy out of his misery. But I know the truth. You can’t fool me.

— Anyway, BBK kills the Undead King, and that’s that. The big bad boss didn’t even put up a fight.

— All of a sudden, fart gases emerge from the Undead King’s body. The fart gases also sound a whole lot like lolis. They taunt BBK before floating away. We gotta catch them all, but we’ll deal with them later. We can take a crash course in PV = nRT and all that jazz. For now, we have more pressing matters. For example, our elf-type loli…

— You can’t have a video game castle without also making it come crashing down after the big bad boss is defeated. Ocarina of Time did it, so Death March can too. But what about grass-type loli! And the hot homunculi! BBK wouldn’t want them to die! Can our newly-acquired elf-type loli assist in any way? Maybe she can stop this self-destruct sequence!

— So instead, BBK painstakingly gathers everyone to teleport them out of the dungeon. What a heroic lolicon. Naturally, he deserves a kiss from his lolis.

— For some reason, the entire Cradle is turning to salt. In fact, a tidal wave of salt is now chasing BBK. I think the show is channeling my hate for it. Unfortunately, even I cannot win against BBK, the lolicon master.

— BBK does some thing with fire and the water to protect himself from all the salt. I’m not gonna bother breaking it down. That would be giving this show too much of my energy. In any case, look at this guy putting forth so much effort just to expand his harem. Man, you gotta respect the man’s dedication to his loli slaves.

— Yep, the loli slaves are tearfully happy to see their master. Yep.

— Apparently, as the Undead King died, he used his last words to tell BBK to protect one of his loli slaves real good. If she uses too much forbidden magic, she’ll turn into an undead-type loli! Who am I talking about? Y’know, the one that wants to jump BBK’s bones. What do you mean that’s all of them? Fine. She’s also known as psychic-type loli. Better?

— Elf-type loli expresses her gratitude, which is of course a kiss. A lolicon wouldn’t have it any other way.

— Then it’s the homunculi’s turn to express their gratitude. Much to psychic-type loli’s chagrin, they quickly pledge their undying loyalty to their lolicon master. Naturally.

— One of the homunculi will stay behind, because we don’t need this many lookalikes. The rest will deliver the Undead King’s ring to his wife’s grave. So how will they decide who stays behind with BBK? With a mass rock-paper-scissors match, of course.

— To nobody’s surprise, No.7 wins. She gets a name, but I won’t remember it. She can be, uh… doll-type loli. Homunculi are kinda like dolls.

— Elf-type loli wants to go back to her home, and she wants BBK to escort her. I mean, who else is going to do it? A loli must be accompanied by her lolicon.

— Oh hey, it’s Zena. She starts crying because she’s not a loli. And as a result, she doesn’t get to have any fun with BBK. All they ever get to do is go shopping and watch boring-ass plays.

— Sorry, Zena, but acting like a loli won’t actually make you one.

— Even so, BBK has a gift for her: those tacky heart-shaped earrings from a couple episodes ago.

— He then gives her the bad news: he has to depart Seiryuu City in order to deliver elf-type loli back to her home. Oh, how sad! If only Zena was a loli, then she’d be able to go too!

— We cap the episode off with everyone seeing BBK and his lolis off. How heart-warming.

— Wait… what’s that? It’s Zena again! Damn, I already told you that you can’t come! You’re too old for this road trip!

— And as a result, we leave her behind once more. Sorry girl, but you must be this short to ride this BBK. And now that she’s out of the picture, BBK can snuggle up against his lolis! We make an exception for doll-type loli as well as lizard-type loli because they’re not human. And in doll and lizard years, they’re technically lolis. Or whatever. I’m just making shit up. Why are you still reading this? The episode is over.