Well, I’m sure this will work out well. I’ve been putting Kokkoku off all morning, but I guess it’s time to finally write up this nonsense.

— Why is the kid silently going along with this? Makoto seems like the energetic sort. Wouldn’t he rather take the credit for himself? Ah, whatever… it’s not like I care all that much about this show. Just a few more weeks and this’ll be over.

— Juri wants to hide Makoto somewhere safe. But if the kid’s not with them, then Takafumi will quickly be outed as a liar. I will now watch as the group is somehow convinced to take the kid with them.

— Slight change of plans: instead of taking the kid with them, Takafumi will go with the kid. Makoto will just have to try and control the Herald from afar. The old man just screams over and over that this is his duty, and the rest of the group doesn’t put up much of a fight.

— Shiomi gives us more repeat information by going on and on about how they can’t give Sagawa time to master his body and recuperate his energy. It’s stuff we’ve already seen for ourselves in previous episodes, so once again, the anime is trying to stall as much as possible. If you pare this story down, Kokkoku might make for a decent 90 min film. It just doesn’t have enough interesting story beats to cover an entire cour.

— Scrawny Hulk isn’t very intimidating, especially when we know that he doesn’t have much of a personality.

— Makoto can also track Sagawa. I assume he can track any Herald then. How convenient. I wonder if he could even control Sagawa if he got more acclimated to his ability.

— Nobody seems to notice that Makoto is giving Takafumi all of the information? Really? 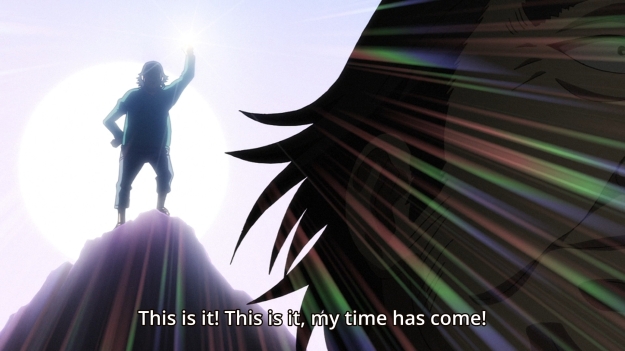 — Sigh. And now he’s lying to children. It’s quite remarkable that the character I despise the most in this anime is Takafumi and not the actual villain.

— I thought the group wanted to hide Makoto somewhere safe. They really allowed some old man to pitch a whining fit and bring the kid to the battle?

— Juri comes close to dispelling Sagawa’s Specter, but he sidesteps her attack at the last second. Before he can counterattack, however, he is suddenly distracted by… a baseball? Are you serious? We cut to Shiomi feeding Sako balls after balls to hit towards Sagawa’s direction. They literally went and got a bat and carton of baseballs. Yep, mmhmm, this is what we’re going to do! Herald-Tobino is going to do the bulk of the fighting, Juri will try to sneak up against Sagawa, and I’ll smack baseballs!

— The sad thing is that it works. Sagawa is not very good at focusing his attention on the main threat. Who gives a shit about the baseballs? They can’t even hurt him.

— Sako: “I trained at the batting cage in my spare time! Check out my skills!” Ugh.

— Eventually, Herald-Tobino has Sagawa pinned to the ground. But Juri and Grandpa hesitated, so the villain eventually frees himself. He knows he has to take out Makoto, and yet when he goes to make his move, he still distracts himself with Takafumi. Terrible.

— Then he distracts himself with Majima. Needless to say, he gets caught by Herald-Tobino again. For a guy with super speed and super strength, he’s also super dumb.

— On the plus side, the rest of the family finally realizes that Takafumi is the liar they’ve always known and love.

— Sagawa tries to free himself by hulking out some more. His body eventually crumbles, and this scrawny thing emerges. It’s kinda like shedding his skin. He’s too scrawny this time to be caught by Herald-Tobino, and for some reason, our heroes continue to hesitate. They just stand there and watch Sagawa replenish himself from the blood of Herald-Tobino. This is so ridiculous.

— Some shriveled up husk of Tobino emerges from the Herald and runs up to Makoto. Meanwhile, Juri nonchalantly remarks that Sagawa’s body is still weak. But is the group going to do anything? Nope. Sagawa proceeds to hightail it out of there. He’s not even all that fast. Good lord.

— The group eventually corners Sagawa in a room. This is over, right? Nope. Sagawa claims he can help return Juri to the normal world. How? By listening to his sermons! He’s a cult leader, after all! And he, too, can teach Juri how to control the Specters without the help of the magical stone.

— Aaaaaand it’s flashback time. Sagawa proceeds to tell everyone about his backstory. Something involving his best friend and his father being cuckholded. I’m not even joking. Our cliffhanger is chibi Sagawa seeing his mother having sex with his best friend’s dad. Sigh, just a few more episodes…